This nicely weathered ATW boxcar appears to have had portions of the sides re-painted where graffiti artists may have been keeping themselves busy.  The boxcar belongs to Jamie Barron.

Those "re-painted" areas were covered with painters tape - it's less sticky than regular masking tape - and then the exposed blue paint was faded by airbrushing.  This time I airbrushed to fade the paint using Proto Paint's Flat Haze, which is actually milky white in colour.  I was tempted to make a couple of more passes with the airbrush, but forced myself to stop as I was afraid of having the white become too noticeable.
A few more passes of the airbrush, this time loaded with Roof Brown, along the lower sill as well as along the roof line add a bit of dirty road grime to the boxcar's sides. 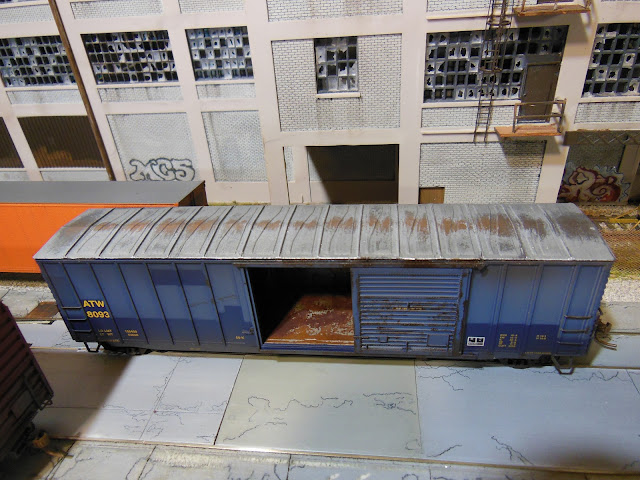 And speaking of the roof, here's a closer look at the roof on this boxcar and how I used MIG Ammo's Chipping Fluid to weather it. 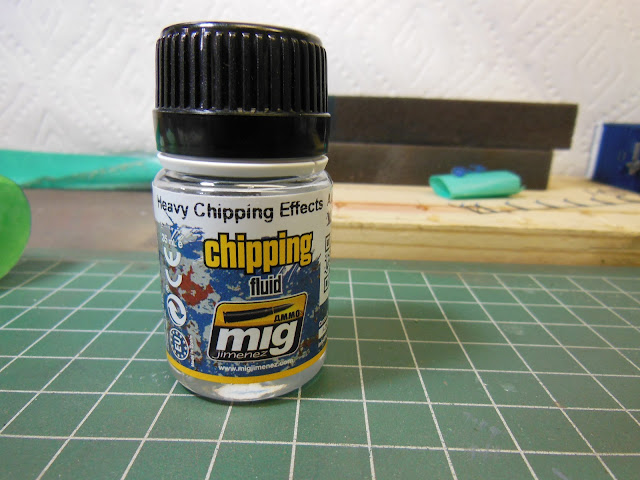 I painted the roof with brown and rust coloured ModelFlex acrylic paints, and then sealed them with Testors DullCote. It seems kind of important to put the rust colours on first, and then the fial roof colour toward the end.  That sequence just looks better in the end.  Anyway, the dullcote is followed with AK Interactive's Chipping Fluid, and once that was dry (10 minutes later), I brushed on Vallejo's Dull Aluminum.  I know that the boxcar roof would not be made of aluminum, but rather galvanized metal.  However, the Dull Aluminum is the only silvery colour of paint that I have on hand.
So that's 4 layers applied in this sequence...
Once the aluminum colour was dry, the fun (and easy) part can begin.  Very lightly dampen the roof panels with just a little bit of water.  This little bit of moisture activates the chipping fluid, allowing the top coat of the aluminum colour to be gently removed using an old artist brush, or some other such item leaving the roof brown and rust colours to show through.  That gives the impression of the rust process having begun on the roof.
I should note also that it must be an acrylic paint over top of the chipping fluid. 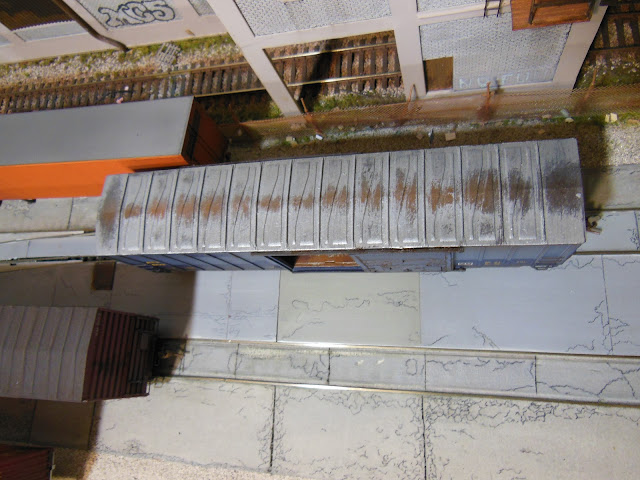 Drone view of the roof panels. 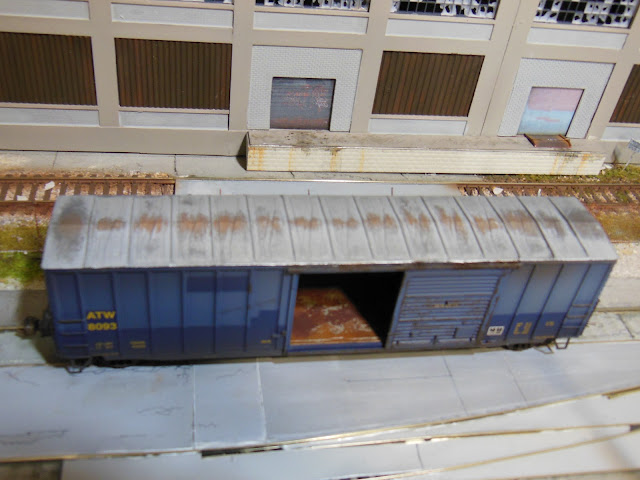 To finish up, I made two quick and light passes with the airbrush loaded with thinned grimy black in order to flatten down the silver (Dull Aluminum) roof.