Weathering and Rusting on Cylindrical Hoppers

I've weathered a set of 4 Rapido cylindrical covered hoppers belonging to my friend Sean.  After I had worked on a couple of them, he mentioned to me that he liked them when the graphics are worn. I left one the way I had done it, but on the other I stripped away my work, and re-did it with more wear and tear. 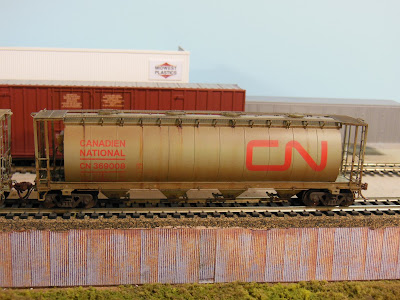 This first car has an overall coating of roadgrime, and just a couple of rust streaks.  (I really have to get to work on ballasting that track.)

The following 3 cars are more weather-worn.  Most of the graphics are faded away, with similar wear to the reporting marks.  The original paint is faded, and over time the weld seams have accumulated grime and developed a bit of dark rust.  There is rust streaking downwards from the walkway supports, and a few rust blisters have begun as well. The wheels and trucks have been given the usual treatment with Camouflage Brown Krylon, with brown and black rust powders to the wheel faces.

While these 3 cars are weathered similarly, each is somewhat different from the others. 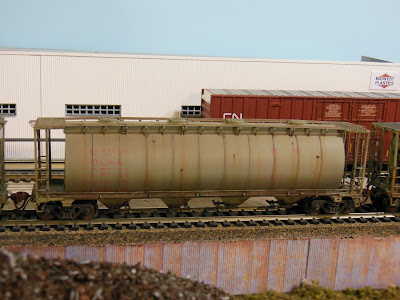 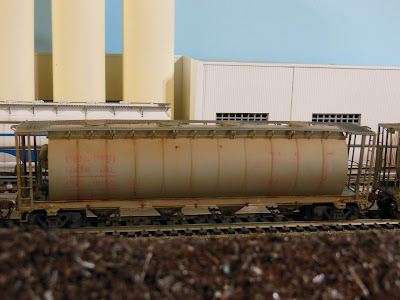 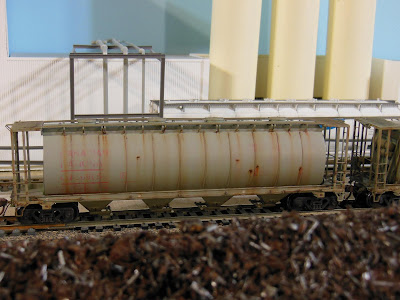 I had a phone call recently from another friend (Chuck), who was telling me about his struggles with creating rust streaks on his models. I tried to explain my process as best I could over the phone, and thought maybe I could try the same thing here.I'm not saying this is the only way, but it's what works for me. The items and method I use are below... 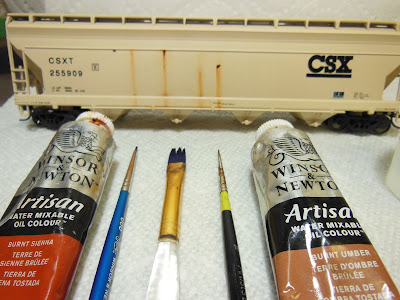 First, on the sample car is placed a small dab of Burnt Sienna from the 000 brush.

Then moisten the flat brush with the water and give it a quick wipe off on a paper towel, so that it is just barely damp.

With the flat brush barely damp, draw it straight down from that dab of Burnt Sienna. This will wipe away most of that original dab of paint, creating the vertical streak. You can use weld seams or boxcar ribs as your vertical guide.  And it can be helpful to use your other hand to steady your painting hand.

And lastly, with the finer tip 00000 brush, place a tiny dab of Burnt Umber in the centre of where the streak begins to create the blistered appearance.

If you make a mistake, you can quickly wipe it away with some water and try again.

Posted by Jimmer at 07:34 No comments:
Email ThisBlogThis!Share to TwitterShare to FacebookShare to Pinterest

Not Exactly the Home Run I Was Hoping For

A couple of weeks ago, I mentioned a product made by Modern Masters called Rust Effects, which I had picked up at Hobby Lobby. A 3-step process, I gave it a try this week on a boxcar that I had on the workbench.

Here's the victim.  I had weathered this car before, but I never really cared for the results of the work that I had done on the roof.  I also thought I'd try to do a little more on the rest of the car, so I've faded the blue paint a bit, and added graffiti and a couple of small details to the car's appearance.

Here's the boxcar, after it's been re-weathered. I patterned the rust and graffiti locations after a photo of another National Steel Car GTW boxcar that I found on the internet. 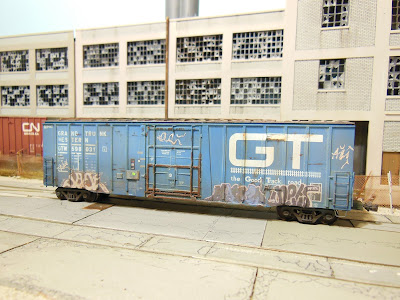 I've faded the paint with pale blue craft sprayed through the airbrush. The rust on the door is done by hand, as well as the graffiti scribbles. The larger graffiti tags are SGS decals. I've added an old ACI tag and a few pieces of grey tape stuck beside the door. The paint on the tack boards has "peeled" and is showing the greyed wooden boards.  I have to replace a missing stirrup step, but what do you think of the green notice stapled to the tack board?  It's a tiny piece that I cut from a green price tag sticker. 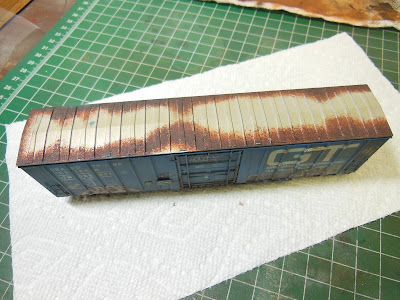 This view shows the roof as it was until this week.  I just never really cared for the way it had turned out, so that made this car my choice for trying out the Rust Effects product. 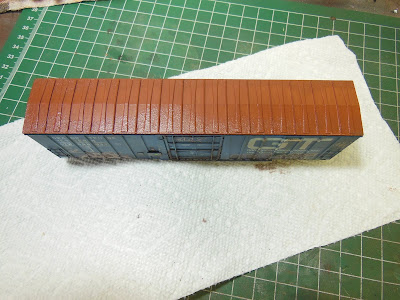 The instructions say to use 2 coats of the Rust Effects primer.  I just brushed it on right over top of the oil paint that I had used before. 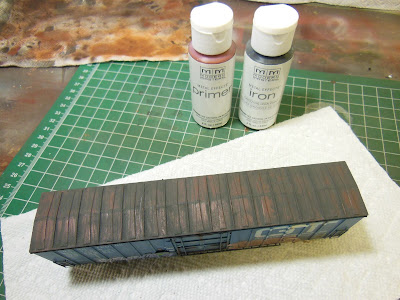 This photo shows how things looked after 2 coats of the Oxidizing Iron paint, again as per the instructions. 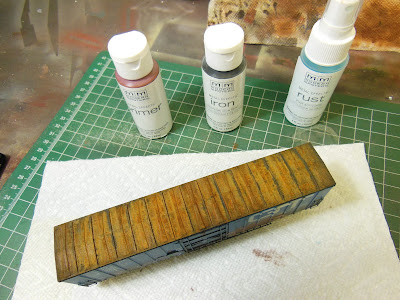 2 hours later, I was able to give the roof 2 sprays with the Rust Activator, and then was to wait 40 minutes or so as it dried.  I think that this looks "rusty" alright, but overall, it's way more yellow than I thought it would be.  I didn't really like it. I was looking for a darker colour, more toward a reddish-brown rust.  I left things this way overnight, thinking that maybe the activator needed more reaction time, and also with the idea that I would look at it with fresh eyes the next day.

The colour looked the same the next afternoon and I was a bit disappointed.  Then I decided to give the roof another spray with the rust activator, just to see what would happen. 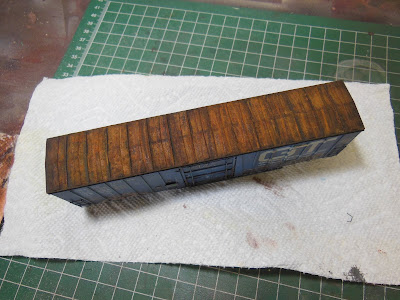 After another shot of the activator chemical, the roof has gone from the yellow colour to a deeper orangeish-brown.  This is better, but not really what I was hoping for at all. Can't hit a home run every time. I don't know if I'll try this product again on another boxcar roof (well, maybe), but I think it might work out well on the interior of a gondola or two.

Posted by Jimmer at 07:25 2 comments:
Email ThisBlogThis!Share to TwitterShare to FacebookShare to Pinterest

Some Weathering and a Light Repair Job

Back from our vacation trip, I spent much of my time this week trying to get caught up on weathering projects that I'd been asked to do for another modeler. In the days ahead I'm intending to get something done on the layout.  But for now...

This Green Bay Western boxcar is one that I particularly enjoyed.  I looked around on the interwebs for photos of similar cars in this colour scheme, but there weren't many to be seen. I did get a couple of ideas though. 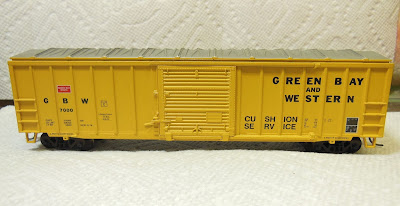 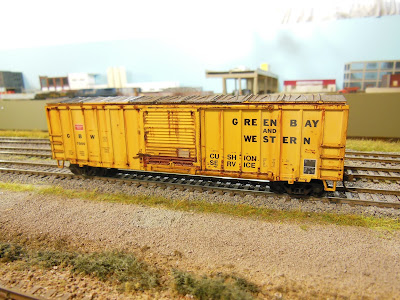 The paint is now lightly faded, less so on the 3 panels to the right of the door. Some rust streaking and a few scratches, fresh primer on the lower area of the door. The roof has been heavily rusted, except for 2 "replacement" panels.

On the 3 bay covered hopper below, I removed the "Farmers Cooperative Association lettering from the sides by soaking the lettering with Micro-Sol for a few minutes.  The Micro-Sol wanted to bead up on the plastic, so I laid small squares of tissue over the lettering to keep the liquid in place. After soaking for about 8 minutes or so, the lettering came right off when I wiped it with a clean, damp Q-Tip. The underlying paint was not affected at all. 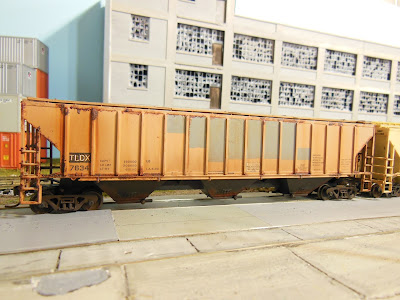 The grey paint patches are strips of grey trim film that I cut to size.  The trucks and wheels are painted with Krylon Ultra-Flat Camouflage Brown. The wheel faces were also given a coating of dark powders.  Note also the rusting around the discharge bays. 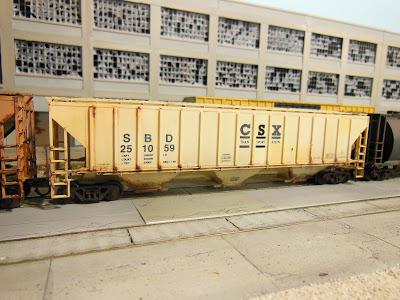 This CSX covered hopper has had it's paint faded and some of it's vertical posts became rusty.  There are also two paint patches, with the colour just ever so slightly darker than the rest of the car.

And below, this waffle sided boxcar is my own, acquired in trade for some weathering work.  I weathered it some time ago, obviously done mostly with my airbrush. Sometime after working on this car though, I found a problem... 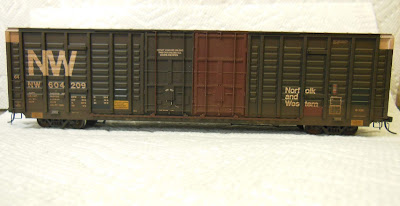 One door is "replaced" and a small primer red patch on one panel as well. The entire car received an over-spray of CraftSmart's "Espresso" acrylic paint (thinned) which takes down the original black quite nicely. 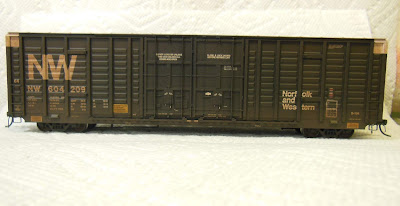 On the car's other side, can you spot the problem?
One of the door posts is missing.  I've looked high and low, but it's never been found.  It was there when I was air-brushing the car.  You can see the paint shadow that was left behind the post when it was sprayed. 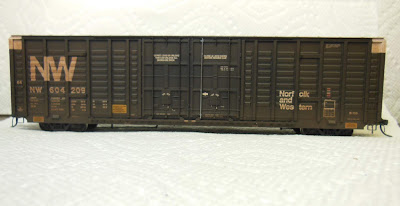 So, the boxcar has finally been routed into the repair shop, where a piece of .025 steel wire was cut to size and attached to the door. 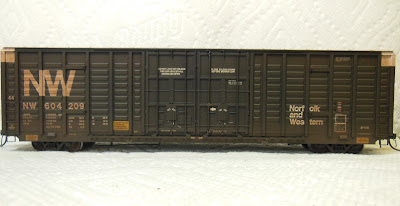 Brush painted with Weathered Black and then the same "Espresso" over top, the new door post blends right in.  The missing door post was a minor problem, but it bothered me, and now this waffle boxcar is going back onto the layout.

Posted by Jimmer at 07:54 2 comments:
Email ThisBlogThis!Share to TwitterShare to FacebookShare to Pinterest

Pictures From a Road Trip

We were away so I was unable to post last week. However I did have my camera with me. It's quite a hit and miss prospect to take photos of trains, or anything else for that matter, when driving on Interstate highways and such. Even from the passenger seat.  Anything of interest rolls up on you so quickly, that there's no time. And there always seems to be a guardrail or a truck or something in the way. We did make a few stops though, so here's a sampling of the bit of railroad type stuff that I did photograph... 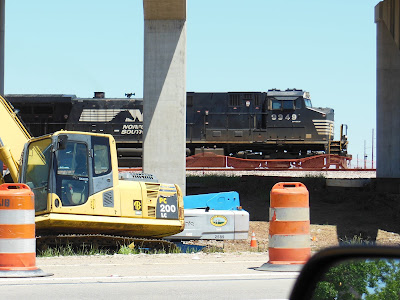 Taken at a stop light on Hwy 31 in Birmingham, Alabama, this NS C40-9W was slowly leading a mixed freight train through a very busy highway construction project. Nice road grime weathering just above the front trucks. 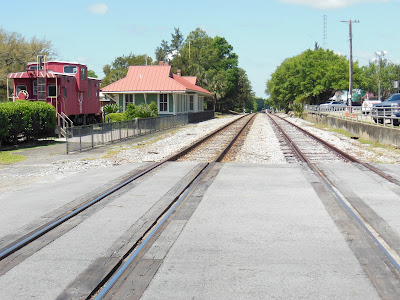 The depot along the CSX line through DeFuniak Springs, in the Florida panhandle is fixed up really nicely, and also features an L&N caboose.  Unfortunately, the museum inside the depot was closed when we were there. I don't know if Amtrak runs through here.  The tracks on the right looked like they haven't been used in a while, but those on the left were very shiny from use.  We followed the line for a couple of miles in each direction from here, but didn't see any freight cars at all. 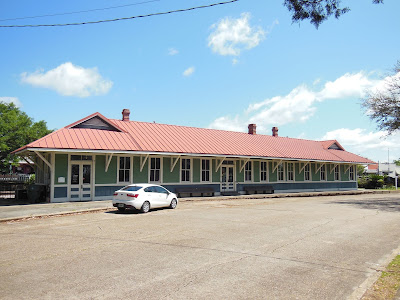 I'm a little disappointed that this car was parked in front of the DeFuniak Springs depot, as it takes away from the photo. 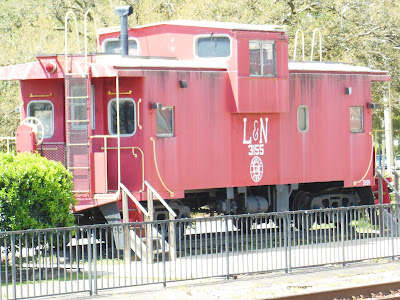 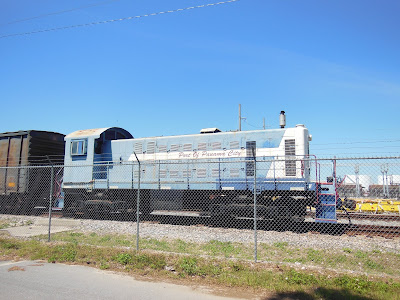 Travelling eastward along Hwy 98 in Florida, some 86 foot flatcars used for carrying steel pipe caught my eye.  We did manage to double-back so I could have a look at this switcher idling alongside a local roadway. Sorry for the fence obstructing the view. This is JRWX 87, with Port of Panama City nicely scripted on the hood. 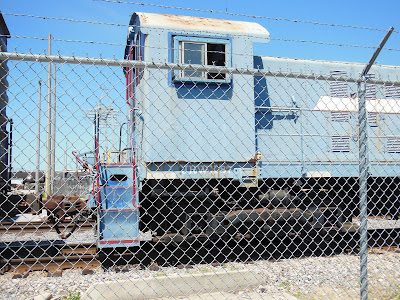 Maybe an Alco S2?  The reporting marks and number were hidden on the sill below the cab.

I'll be able to get back to some modelling this week.  I might try out this product which I found in Hobby Lobby while we were away.  Not sure how useful it will be for rusting freight cars, but I'm hoping it will work well for steel siding or roofing. 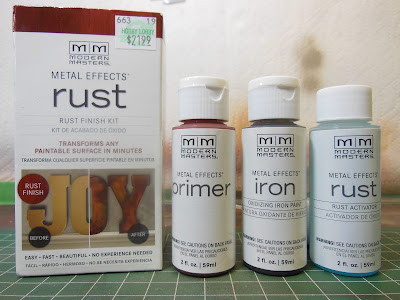 I'll be looking forward to trying this out soon.
Posted by Jimmer at 07:48 No comments:
Email ThisBlogThis!Share to TwitterShare to FacebookShare to Pinterest
Newer Posts Older Posts Home
Subscribe to: Posts (Atom)