Around Town and Around the JSSX

Peter Mumby and George Dutka - George writes the White River Division blog and Peter contributes to it often  - came by for a visit last week.  Always a pleasure to see these guys, they took a good look around the JSSX before heading out to do some train watching here in Sarnia. 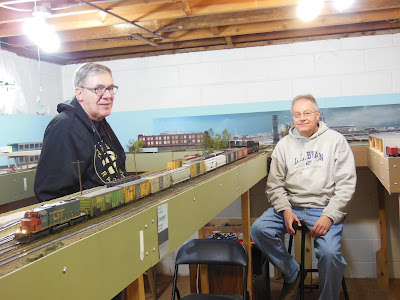 Peter and George are doing their best to appear casual while GT SD38-2 6252 gets ready to switch out a few industries. 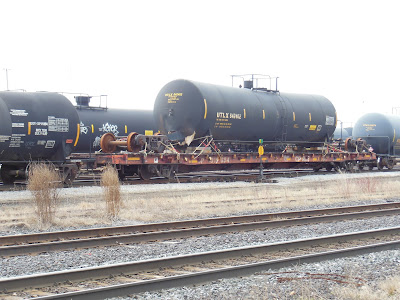 After their visit to the JSSX, I met Peter and George down at the Via Station. While there,  the local CSX transfer train passed by, with this tank car looking like it's seen better days. 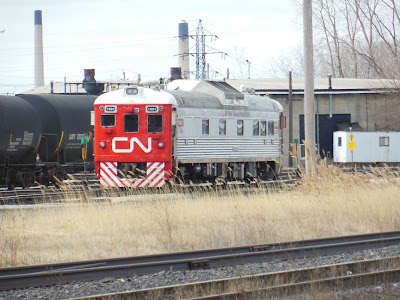 Just a very few minutes after the CSX train went by us, this CN track test car #1501 came around the wye and waited until it was allowed to cross over the main track and proceed onto the Point Edward spur. 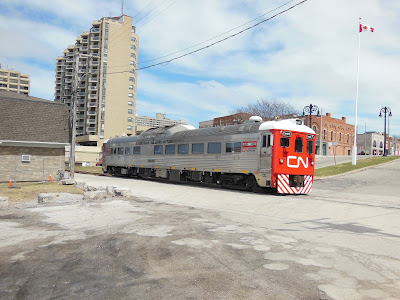 On Sunday, April 14 2019, train 397 is about to pass by the Sarnia station as it heads for the St.Clair Tunnel.  2098 is a C40-8W, and a former ATSF locomotive leading a somewhat unremarkable train, except there is one small detail on that GECX leaser engine that I though was noteworthy. 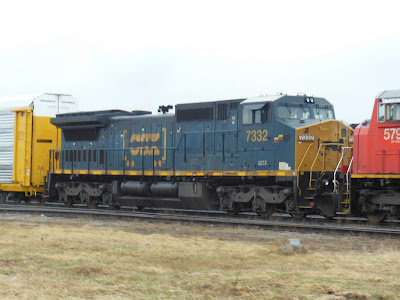 Did you spot it?  There's a Seaboard System logo on the side of the cab nose.  Kind of an interesting detail on this C49-8 leaser locomotive.

Another engine that's been busy in the yard here in town for some time now, is this GP38-2 leaser from. GMTX.  I do like this shade of blue with the white, and notice the dark grime streaking down the sides at the door hinges.  A model of this locomotive would be a real nice leaser addition to the JSSX.  I could do without the web address on the sides though 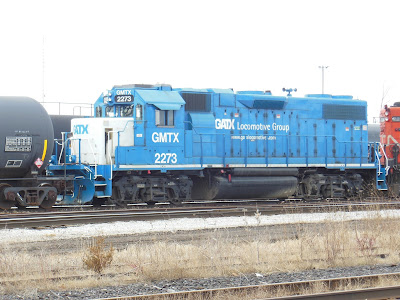 A bit of a lull this week as far as actually working on the layout goes.  I thought I'd post a couple of random photos. 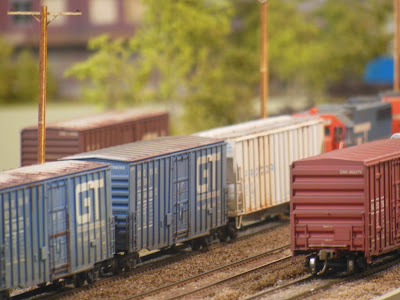 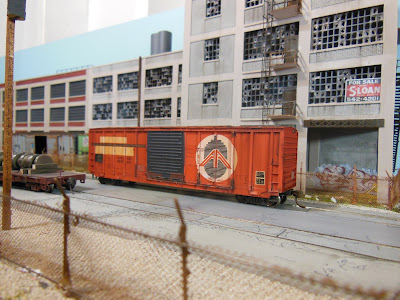 I wasn't satisfied with my weathering on the this former AnnArbor Railroad boxcar, but I really like the logo, which represents a car ferry in the fog.  The car has been sold to another modeller. 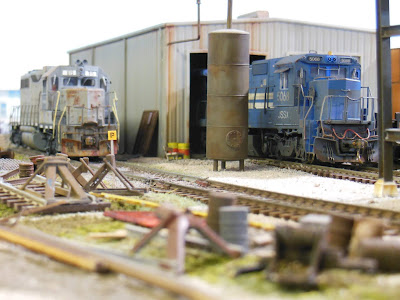 A view of the JSSX maintenance shop.  The yellow post with the letter "P" marks where the isolated DCC programming track begins. 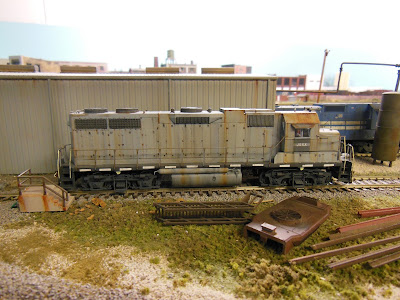 Second-hand GP 38 JSSX 815 sits beside the engine shed and and waits for it's next assignment.  I got this one as an undecorated Atlas model.  I used Primer Grey, Weathered Black, and Grimy Black to paint the model.  Then the weathering was done with burnt sienna, burnt umber, and ivory black

I attended the Woodstock Train Show back on March 30th.  I didn't have a table this time, as I didn't feel that I really had enough things to sell to make it worthwhile.  I thought that it was a pretty good show though, and came away with a couple of items.

I picked up a very nice gondola, made by Rapido. Painted for the Algoma Central, this will make a real good addition to the layout once it's weathered a bit.  I'll have to make a removable load or two for it also. And the other thing I purchased was a set of 4 modern looking streetlights, made by a company called Dijikeijs.  They are pre-wired, including a resistor, and LED light. 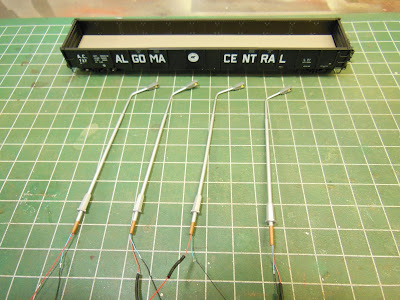 The Algoma Central gondola and LED streetlight set.  The gondola needs some weathering before it goes out on the rails, And I look forward to setting the lights in place and having them operable.

Also while I was at the Woodstock show, I spoke with Peter Mumby, of Peter's Trains.  Peter mentioned to me that when he reads my blog on his iPad, the blue lettering doesn't show up very well against the black background, which makes it difficult to read.  I had no idea that this was the case, as everything seems to show up just fine on my laptop.  I don't use an iPad.  My adoring wife has one though, but I just never really have occasion to use it. I had just always thought that the blue font looked nice.

So, in thinking this through a little bit, I figured that this orange coloured font should show up better against the black background.  So, I gave it a try last week, and sure enough, it's much easier to read.  So, thanks for the heads-up Peter.

Knowing that I've been chipping away at a building a scrap yard on my layout, Peter referred me to a post from September 2015 on George Dutka's White River Division blog, in which the Zubick's Scrap Yard in London, Ontario had been featured. 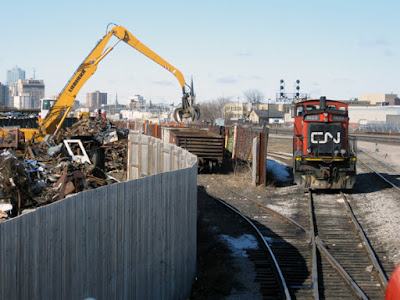 Full credit for this photo goes to George Dutka and his White River Division blog. 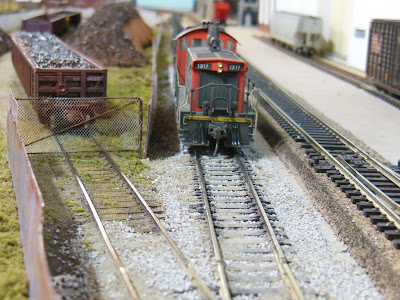 When I saw that photo of George's, I had the idea to take a comparable picture on my layout. Here's my attempt.

A while back, I wrote about wanting to change the depth of the MIdWest Plastic plant that's situated against the layout backdrop. Well, I finally got around to doing that on Thursday.It took a couple of hours or so, and some careful work with an Xacto blade, but the basic work is now done.


Here's a view of the building, with about 2 inches trimmed from the back., and the spur track roughly set into place.  The extra couple of inches of separation between the spur and the main track will look much more prototypical and allow for better scenicking 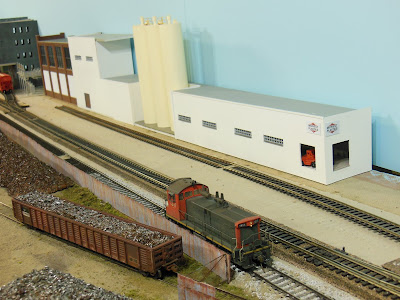 The MidWest Plastics building has been reduced in it's depth, in order to be able to move the spur track further away from the mainline. I've obviously got lots still to do here, on scenery as well as on the building itself, but that's the general idea anyway.

Posted by Jimmer at 07:34 3 comments:
Email ThisBlogThis!Share to TwitterShare to FacebookShare to Pinterest

Scrap Metal Piles at the Recycler

My plan, if I'd had one, for this week would have been to work on the MidWest Plastics plant that I wrote about in last week's post.  That went by the wayside however, as Brian gave me a couple of small bags of "busheling", metal chips, that I could use at my scrap metal recycler.  I was given separate bags of steel chips and aluminum ones, which is great, because I felt that this industry should really have separate piles for ferrous and non-ferrous metals.

So, I spent time gluing the chips to two of the base styrofoam mounds that I had carved and painted. The longest of them I had featured in this photo way back on March 2nd. By the way, in the background of this photo is that MidWest Plastics industry that I mentioned. 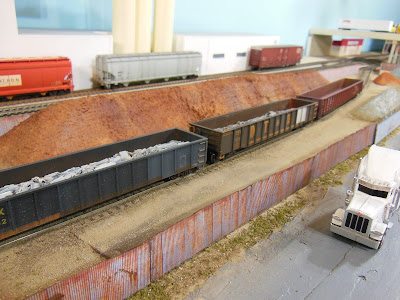 I attached the metal chippings to the styrofoam using white glue. Working in small sections at a time, I spread the glue on full strength, and then sprinkled on the metal chips and sort of pressed them down into the glue.

It was at about just about this time that I came to realize just down how sharp these little metal pieces can be. I took two or three slivers in my fingers as I was pushing them into the glue.  I learned fairly quickly though (for once), so after that I used a folded up piece of paper to save my fingers as I pressed onto the metal.

As I worked on each small section, I also sprayed the chips lightly with isopropyl alcohol as a wetting agent, and then dribbled thinned white glue over them to make sure they are well glued down.  The whole process, while easy enough to do, was fairly messy as the busheling seems to tend to scatter around a fair bit.  And then to add to that, the thinned white glue is runny, which compounded the mess.

Here is an up to date photo from roughly the same viewpoint as that above, showing the pile of scrap metal with the actual scrap metal glued to it.  This stuff makes the scrap yard look waaaayyy more like what I had originally envisioned it to become. 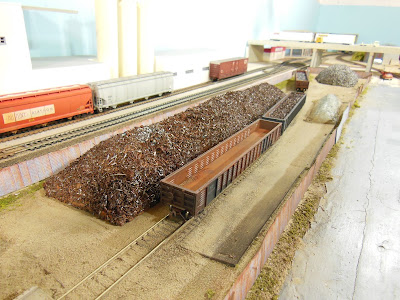 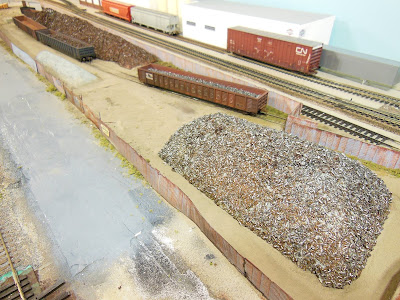 In the foreground here (above) is the non-ferrous (aluminum) metals pile. I've also used the busheling to make removable loads for my 65 foot gondolas, with more underway for use in 50 foot gondolas.  It looks like two of these gondolas are loaded and could be picked up anytime by the GT. 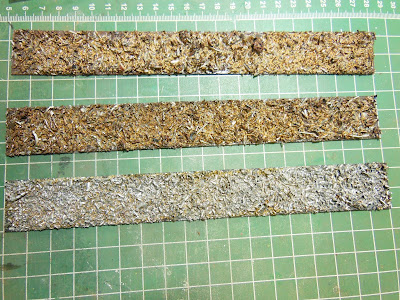 These busheling pieces are glued down to pieces of .040 styrene sheet that have been cut to drop fit into my 65 foot gondola cars. 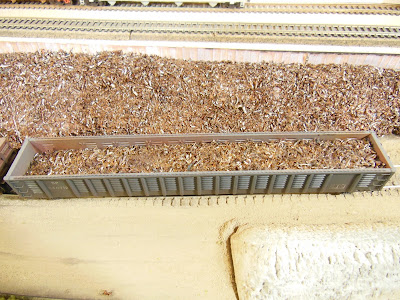 I think I'll add a couple of pieces of square styrene tube to the underside of the loads to raise them up a little closer to the top of the gondolas.


And, if you have interest in gondolas of scrap metal, and about 12 minutes to spare, Brian also forwarded me this link to an interesting video of a CF&E train. It's mostly overhead views of the train. Real good looks at a variety of loaded gondolas, which are spread throughout the length of the train.