Work and paint on the new GP38 has finally been finished up, so I thought we'd have a look... 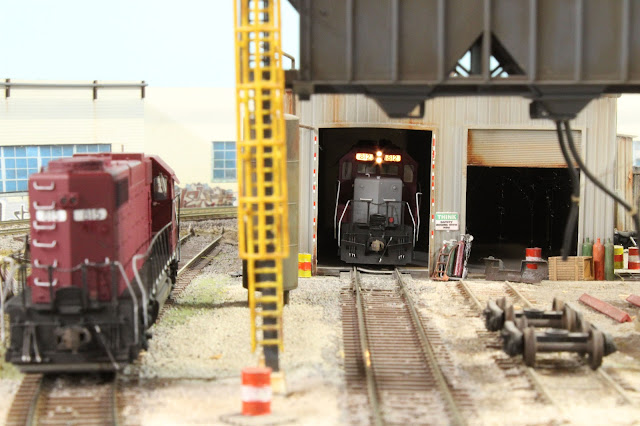 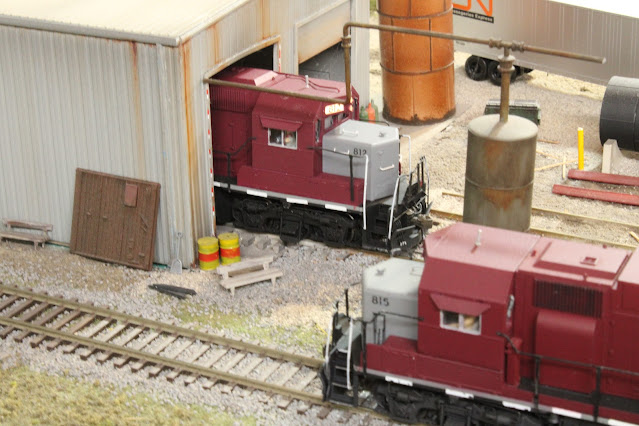 Edging it's way out into the light.  Gone are the oversize white numbers (which I thought looked stark and out of place), the numbers are decaled on the sides of the nose instead. 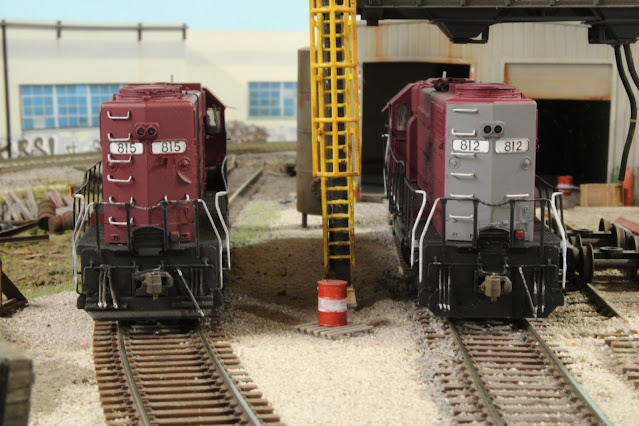 I decided that I might like it if the back end of 812 was painted in the grey as the nose is, and maybe it shows how a colour scheme might evolve a little bit over the course of time 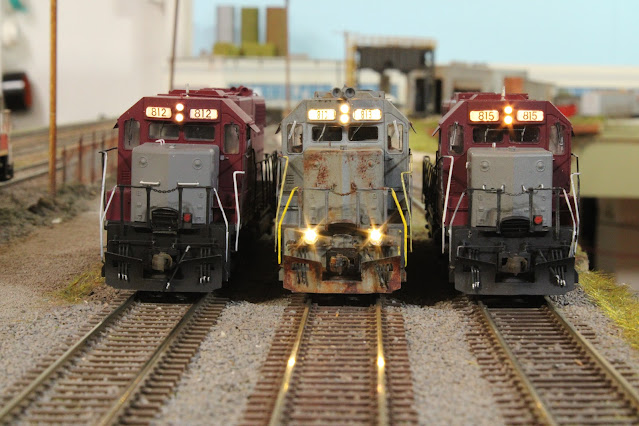 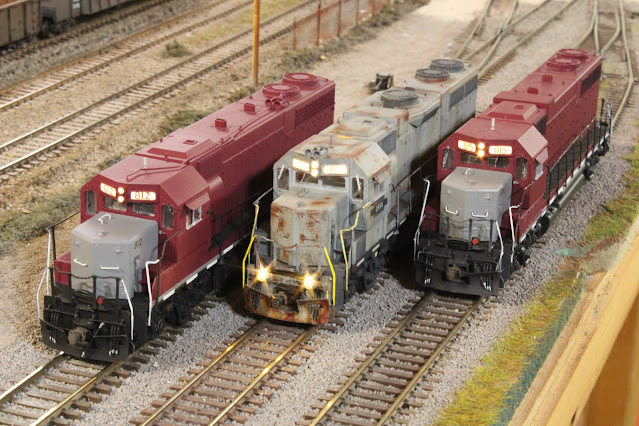 Kind of a nice view of these 3 of the shortline's GP38's.  A couple of subtle changes is that the grab irons on the Cornell Red units have been painted white (for safety) instead of the grey that the 815 had previously.  Also, 812 has had the horn relocated toward the rear of the locomotive.  815's horn is missing for the moment, but I've got a replacement around here somewhere.  I'll probably move it to the rearward location as well. 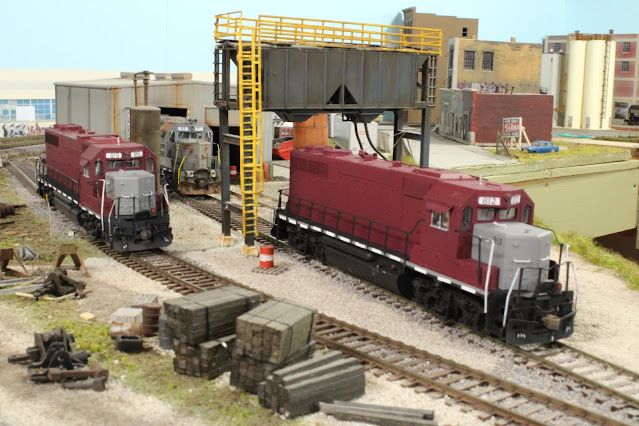 Thought I'd also post this look at the 3 main JSSX engines at the shortline's maintenance area.  The two Cornell Red engines look great and I really like them, but that old, weather worn 813 is still my favourite...
Posted by Jimmer at 08:37 2 comments:
Email ThisBlogThis!Share to TwitterShare to FacebookShare to Pinterest

I regularly check Lance Mindheim's blog (a link to that is in the sidebar), as I admire his modeling talents, and also because I like that so much of his work is set in a modern urban-industrial environment, which is of course the general theme of my freelanced layout here.

On January 31, 2021, Lance posted a gondola that he had modeled and I really liked it.  Here's the link directly to that post so you can see what I'm talking about. https://lancemindheim.com/2022/01/a-gondola-for-fpt/

The first thing I noticed about his gondola was that it was painted grey, which I thought was unusual, as I'm not sure I've ever seen one that colour.  I had an old Roundhouse models gondola in my storage cabinet that I had already bulged the sides on, and I'd already rusted/weathered the interior too, but it seems to hardly ever make it's way out of storage and onto the layout. 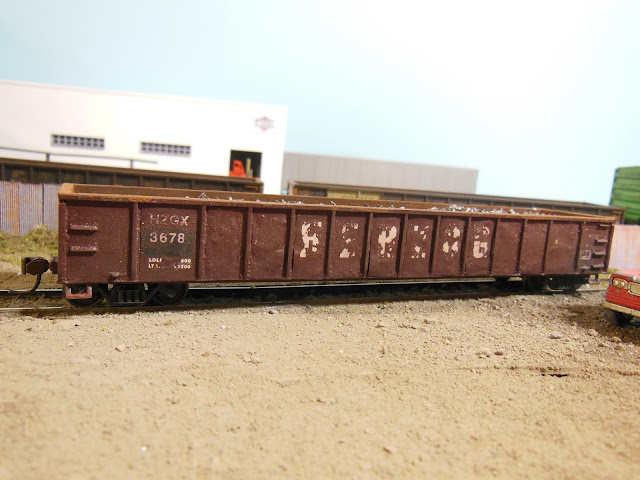 Here's the gondola as I had painted it previously. I decided to re-paint it in Primer Grey and re-letter it to ZVBX like Lance had done. When I re-numbered it, I decided that I would take a guess at a number that might be in the same number series as his model.

I looked up the ZVBX reporting mark on rrpicturearchives.net, and found it to be registered to "Ferrous Processing and Trading" who evidently have locations in Tennessee and Florida, but more importantly to me they are also in Windsor, Ontario as well as Ohio and Michigan. I've never assigned a name to the metals recycler on the layout, and I think of the JSSX as being loosely set in the Michigan / Ohio region, so this gondola idea might have turned out to be a nice little boost to the layout in more ways than one!

The only downside to this (so far) is that the number series I've used for the model is not listed in the rrpicturearchives.net data base.  Oh well, maybe I just won't tell anybody.

Here's a look at my gondola after re-paint: 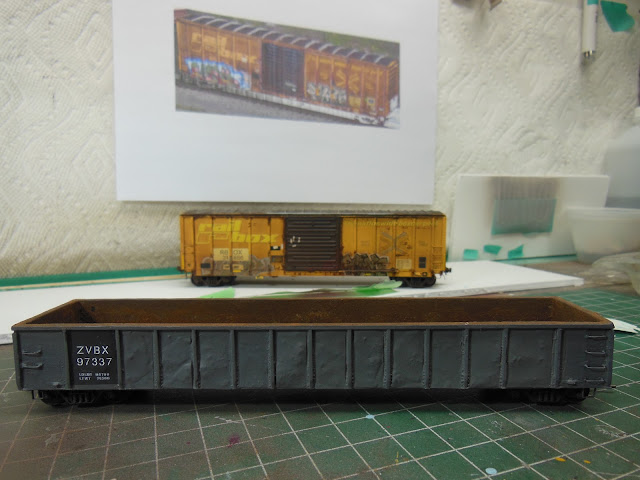 The gondola on the workbench after re-painting with ModelFlex Primer Gray.  I also carved off the original molded-on steps and grab irons, replacing them with wire ones. The reporting marks decals are from a Microscale lettering set. That RBOX in the background just happened to be on the workbench for some touch-up work. 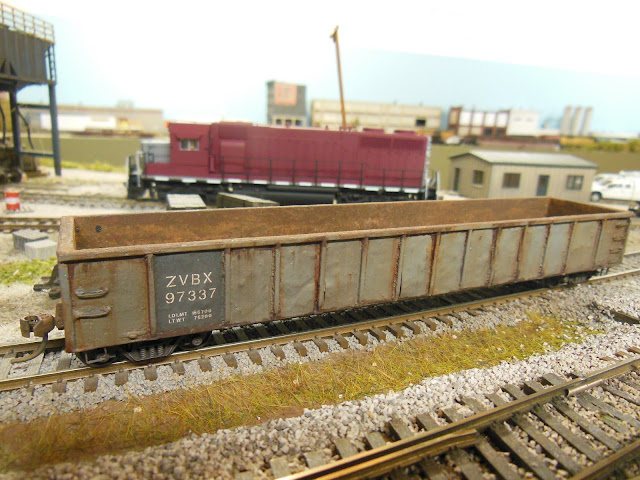 Some rusting has been done with burnt umber streaked down the ribs.  The dents are .005 thick styrene that I had laid down on our concrete driveway and ran a wallpaper roller over.  I then cut the styrene to fit between the gondola's ribs.
Since the gondola was looking so "well used", I thought I'd better add graffiti to at least one side as well.  Most of it is from graffiti decal sets (also Microscale), but I did scribble in a bit of it by hand using .3 mm ink pens. 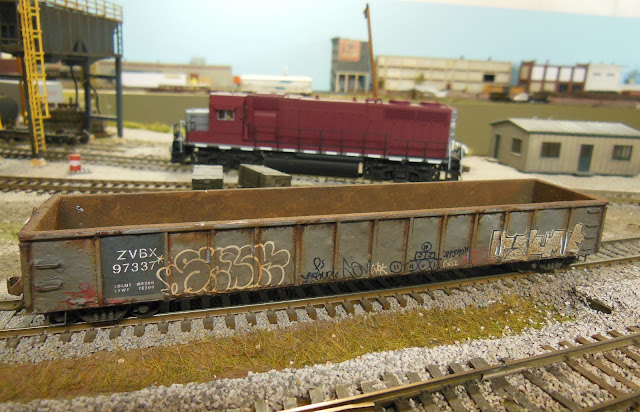 The white graffiti decals appeared quite stark against the grey colour of the gondola, so I loaded up the trusty airbrush with "Rail Brown" and oversprayed the sides and ends which flattened down the appearance of the whole car quite nicely.  Oh, and there's the new GP38 #812 in the background.  Another post on that soon. 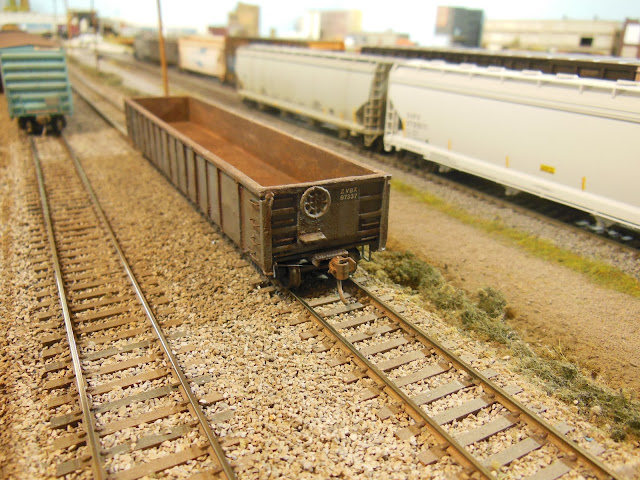 Barely visible here, I also added coupler lift bars to the gondola.  I've got another similar gondola around here somewhere too, so I may just rework that one too.  And my thanks go to Lance Mindheim for the idea.
Posted by Jimmer at 07:25 3 comments:
Email ThisBlogThis!Share to TwitterShare to FacebookShare to Pinterest

I've added another blog link to the sidebar "My Blogs List".  This one is for the "The Little Rock Line", which I found via the D&H Colonie Main blog.  The Little Rock Line looks to be a top-notch N-scale layout set in 1980 and the blog is really nicely done. The link will be on the sidebar, or you can just use this one right here: http://thelittlerockline.blogspot.com/

Moving on now, hopefully you saw last week that I had posted a picture of my version of a not-so-neat-and-tidy workbench, and I wrote that if anyone sent me a picture of theirs, I'd post it up on here as well.

I actually received four responses, with photos attached, from other modelers. I was hoping for maybe a few more, but I'm not complaining. I appreciate them taking the time to send these for us all to look at. Here they are, in all their glory, and in the order that I received them through the week. I've also included brief descriptions from the senders...

First up we have this example: 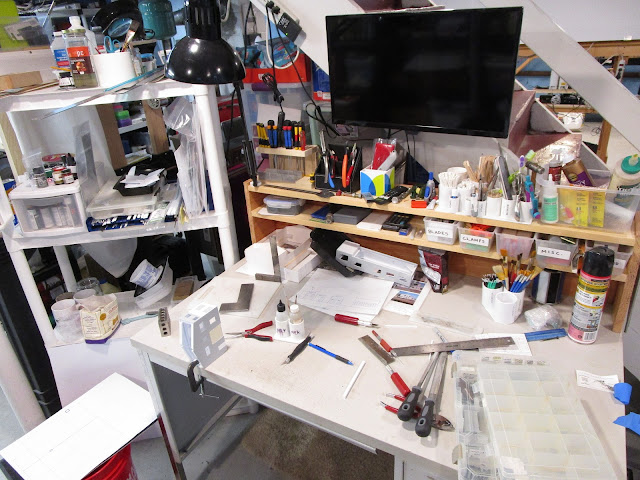 This bench belongs to Benjamin Maggi, of the DandH Colonie Main blog (see the sidebar for a link).  Benjamin refers to this as his "modeling bench", but he also noted that he's got a separate bench that features a drill press, belt sander, grinder, and miniature bandsaw.

Next is not really a bench, but a look at in-progress models from Bradford: 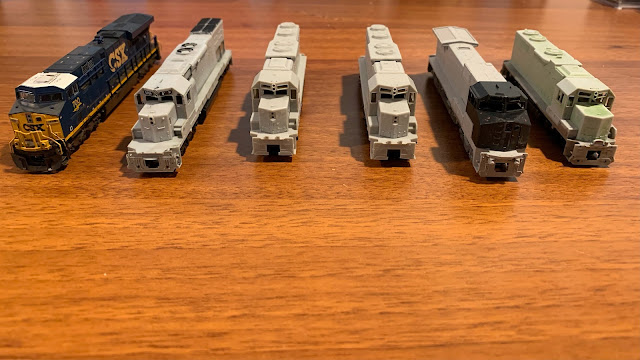 Bradford writes that he doesn't have a permanent space yet for a bench, but he was kind enough to send along this photo of some current N Scale projects that he's got underway.  Left to right we've got CSX 700 an ES44-AC receiving detail work, then an SD40T-2, two SD35's being upgraded to SD38-2R's, a B40-8W, and a GP38 being detailed into a GP38-3.  So, some pretty cool stuff going on here.
And Kevin Smith sent us this view... 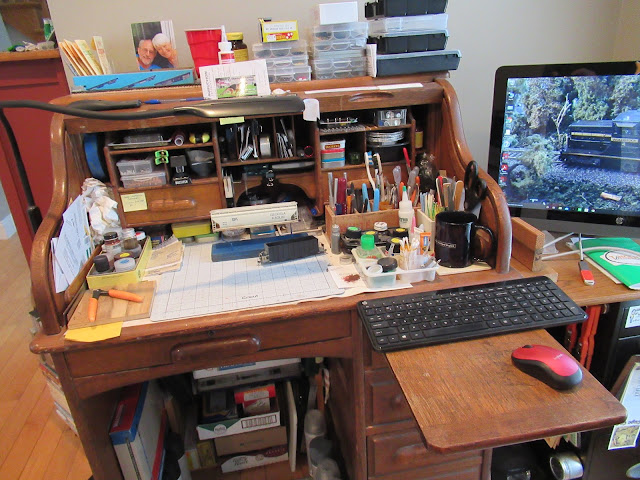 Kevin's roll-top desk serves well as his work space.  He's working on a Georgia Kaolin covered hopper, and kitbashing an Ortner aggregate hopper from an MDC rapid discharge car.  Kevin points out boxes of detail parts above the desk, and his research centre to the right.
And here's a view from Mark Gionet: 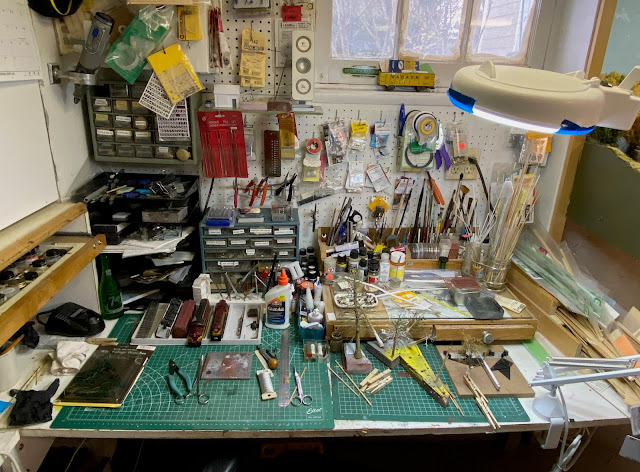 Mark sent this photo in of his busy looking workbench, which features natural daytime light through a window above the bench.  He's working on Boston & Maine RS2 and BL2 models, a couple of bad order freight cars, and some scratch-built white pines to keep him busy. Mark commented that "you can never have enough projects".  I'm not quite so sure he's right about that.
I'll close out this week with a look at my bench from a different angle: 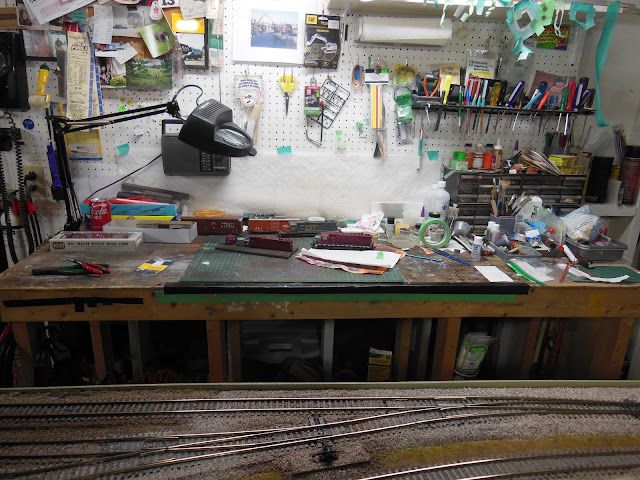 Thanks all for looking in.
Posted by Jimmer at 07:49 2 comments:
Email ThisBlogThis!Share to TwitterShare to FacebookShare to Pinterest

Here's mine.  Lots of projects on the workbench, doesn't really seem to be too much getting finished up though... 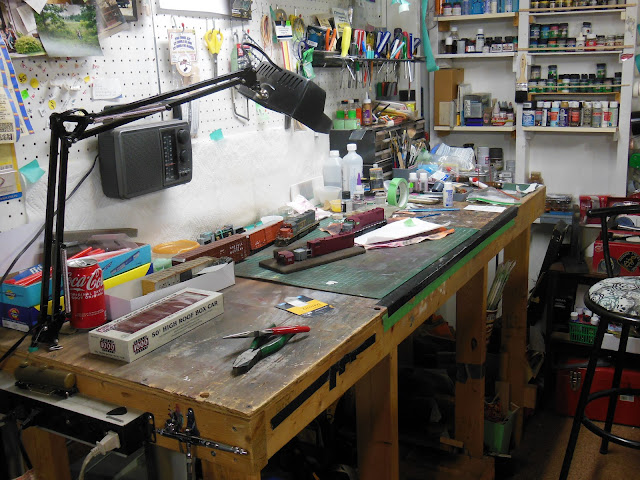 Let's see...in no particular order, we have 2 GP38's receiving paint work, and an SD38 that's there just for some touchup, there's a Proto1000 CN boxcar that just arrived, a RailBox car that I intend to put some graffiti on, and 2 other boxcars that are to be weathered for Jamie.  On the shelves down at the far end are I don't know how many bottles of paints which are actually (remarkably) in some semblance of order. There's the airbrush hanging at the near end of the bench, and my CMX track cleaner car sits close by.
Anybody wants to show off their workbench can send a picture of it to me at jimsloan@sympatico.ca  I'll post it up here.  Kind of an audience participation type thing.
On the layout, the industry in the back ground is where I usually spot the big 86 foot auto parts cars. That spur will hold 3 of those big boxcars, but it kind of looks like they're jammed in when I put that many in there. 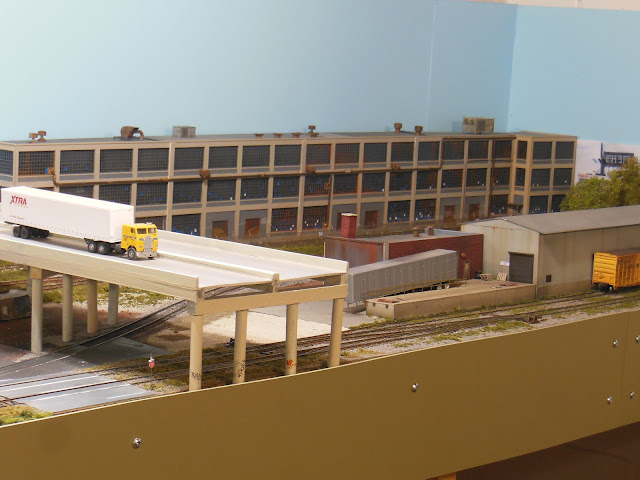 The structure is a touch over 49 inches long, and I've got a rather vague idea about relocating it and making it longer. I've got so many of the big boxcars that it would be real nice to be able to get 5 of them on the spur for switching at one time.
But I've got to clean up some of those other things from the bench before I try to do that.
And speaking of 86 foot cars, I received 2 new ones this week from Tangent.  Here's a look at one of them. 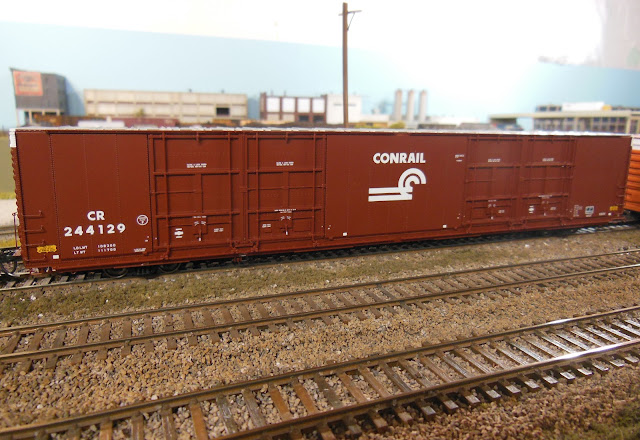 This is a model of a Conrail re-paint of an 8-door Greenville car.  It's really nice.  Right out of the box, the model had a little bit of a problem derailing though, even on straight track.  Now, maybe the track isn't laser straight, but the boxcar shouldn't be derailing like that.  Turned out that the screws holding the trucks were just a touch too tight.  Problem solved by simply backing off the screws a little bit. 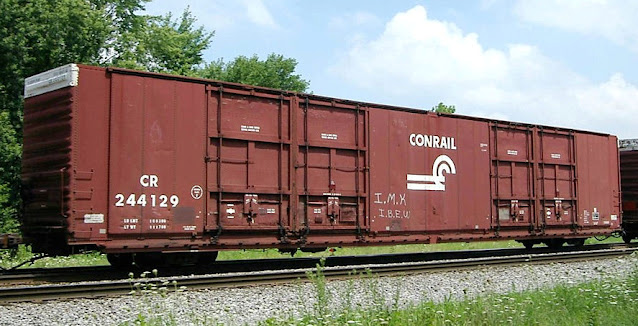 And this is an Alan Gaines photo of the real boxcar from rrpicturearchives.net.  Should make for a nice understated weathering on the model whenever I can get to it.
Posted by Jimmer at 10:49 No comments:
Email ThisBlogThis!Share to TwitterShare to FacebookShare to Pinterest
Newer Posts Older Posts Home
Subscribe to: Posts (Atom)