First off this week, I thought this was interesting...

I met up with Luc at the Sarnia train station on Friday afternoon.  While we were there CN had a train shunting back and forth as it was being put together.  Here's one of the few photos I took. 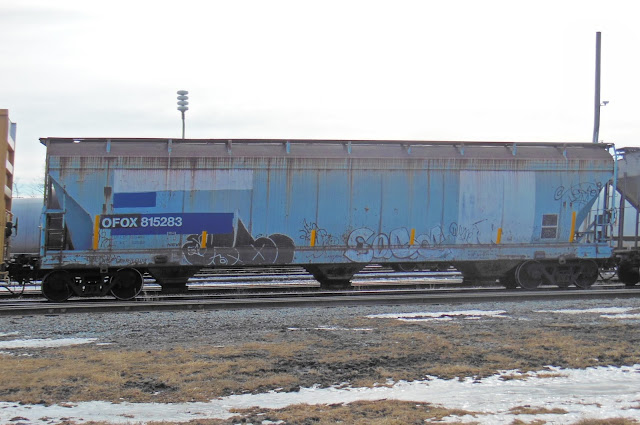 I liked the look of this former Rock Island 3-bay covered hopper. Nicely faded blue paint, plenty of rust streaks, 3 colours of paint patches, plus a little graffiti.  Lots going on with this one.

From a few scraps of .040 styrene I made up this loading ramp for the transfer spur that's going in on the former site of the welding shop. I'm not satisfied with the appearance of the cracks in the concrete.  They're drawn on with a .010 ink pen, but I think they look too thick, so I'll probably end up re-painting that area. 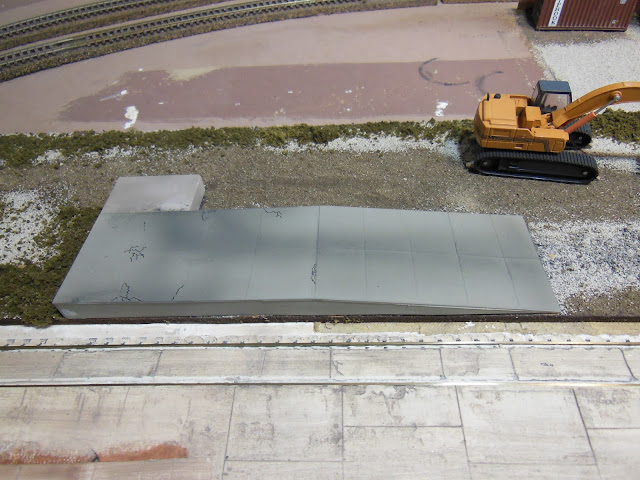 The concrete in the foreground remains on-site from the days of the welding shop being here.
A flat car is positioned at the dock.  The brake wheel had broken off, and in a stroke of luck I happened to find it along the tracks elsewhere on the layout.  I replaced the broken brake wheel post with a piece of bronze wire. 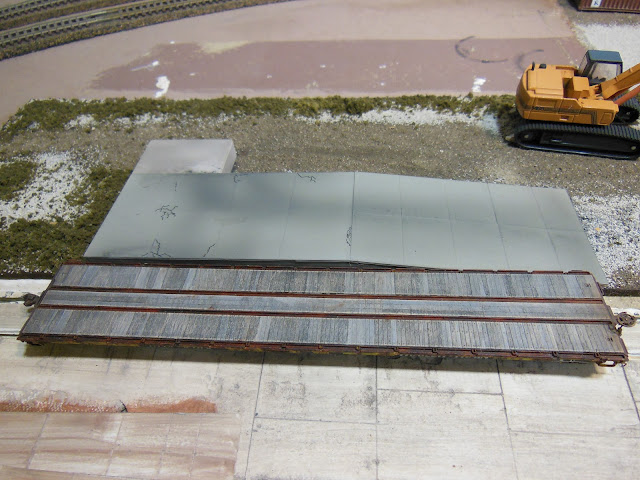 This wooden deck flat car from Intermountain is really nice, but super-light in weight, so it pretty well must be run at or very near the end of a train.  And that's even with a load such as the excavator that appears in the corner of the first picture (above).
One more thing from the past week.  I was watching from my workbench as a train ran along the JSSX, returning from the industrial Blvd. job, when I saw the cars wobble quite noticeably at one spot on a curve.  Closer inspection by the maintenance department (me again) found this pretty significant kink in the track.  Cold weather? 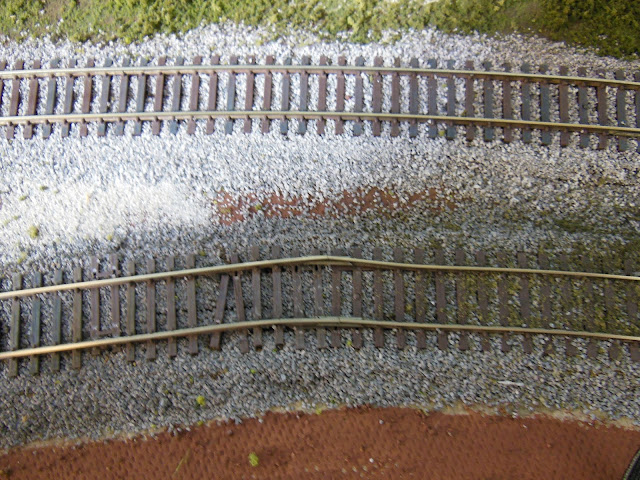 The track here is deflected about 1/8". The force was great enough that the ties have broken away from the roadbed that they were glued down into.  Funny thing though, the trains don't derail through here.
Posted by Jimmer at 08:38 3 comments:
Email ThisBlogThis!Share to TwitterShare to FacebookShare to Pinterest

Here's a photo of a DT&I waffle sided boxcar that I've recently weathered.  Some masking tape, ProtoPaint Flat Haze, artists acrylics, and a degree of patience were used to do the weathering.
The side-story to this one however, is that I actually used to own this very boxcar, but I didn't want to weather it because I find that difficult to do because of the waffles.  So, I sold it.  The new owner, Jamie, crossed me up though and brought it back to me to weather. 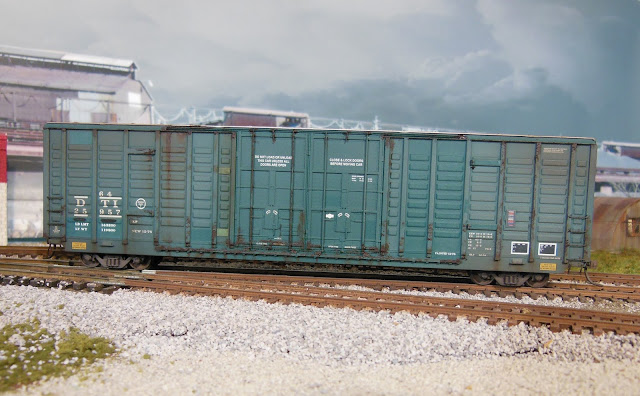 I think this 60 foot high-cube car turned out real well, and now I kind of wish it was mine.
I've recently pulled this old GP9 from the storage cupboard and put it to work out on the layout. It was originally painted and lettered as a RailServe locomotive, so I simply blanked out that part of the logo with some black trim film and then added some weathering.
It also has the sound feature included, which I'm not really all that crazy about. 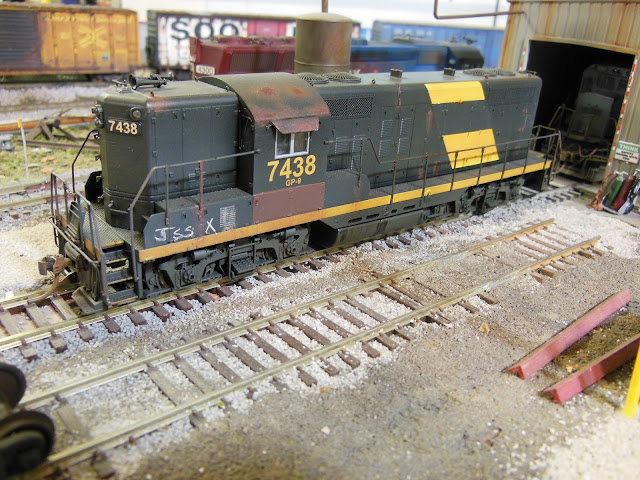 JSSX GP 9 in front of the engine maintenance building.
The other side of 7438 as it sits on the programming track.  One of the JSSX technicians (me) has been assigned to try to get the sound volume adjusted down. Sort of hard to see very well in the picture below, but I kind of liked the graffiti work on this CNIS cylindrical covered hopper.  That's a red chile pepper smiling for us. 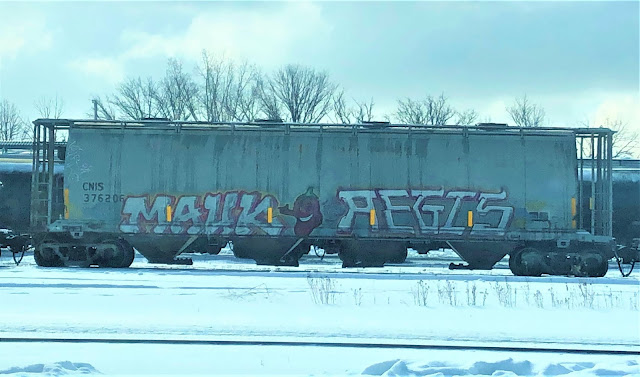 Posted by Jimmer at 10:35 2 comments:
Email ThisBlogThis!Share to TwitterShare to FacebookShare to Pinterest

End of the Line for Wright Bridge & Tank

The local fabrication shop, Wright Bridge & Tank is about to close down and be razed (removed) from the JSSX line in the near future.  I named it for my grandfather, Herbert Wright, who was a mechanical engineer at one of our local refineries. 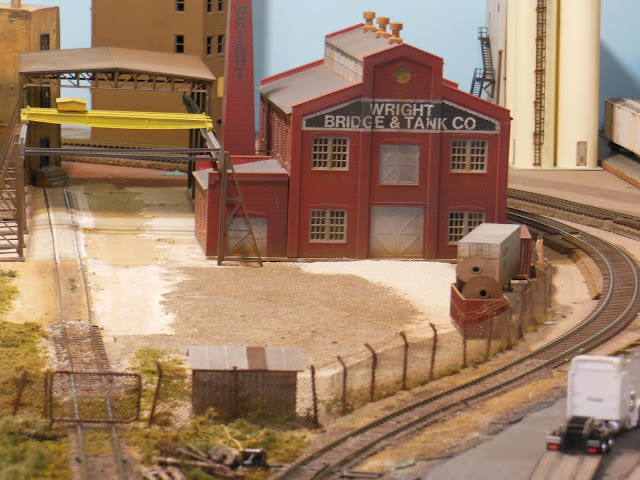 It's a nice little industry, and coil steel cars, gondolas, and flatcars would be spotted here.  I have loads that I've made up of flat sheet steel, pipe, and wire that I would send in quite often. I recently needed to replace a right-hand switch elsewhere, so I took one from Wright's, reducing it down to a single track spur. 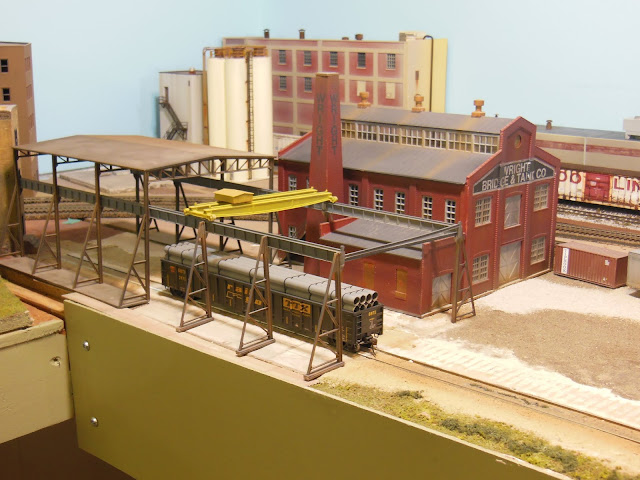 I've always liked this double length outdoor craneway.  The portion of the craneway under the roof was part of the original kit, and the 3 extra pairs of supports were a train show find a few years ago. I scratch-built the extended girder section.

So the reasons I think I'm going to remove this industry are twofold.  First, I've been thinking for a while that the architectural design/appearance of the building doesn't really "fit" well with the rest of the layout.  It's more suited to something in the 1930's or 1940's than the 2000 era

Second, the height of the building and the stack creates a bit of a problem with viewing and reaching the industry that's behind it in the corner.

So I think it's time to just remove Wright Bridge & Tank and put something else in it's place.  I'm trying out moving over this warehouse from it's present location along S.Industrial Blvd., but not sure I'm liking it very well.  Another thought is to turn the space into a simple open-air load transfer facility. I might run with that idea. 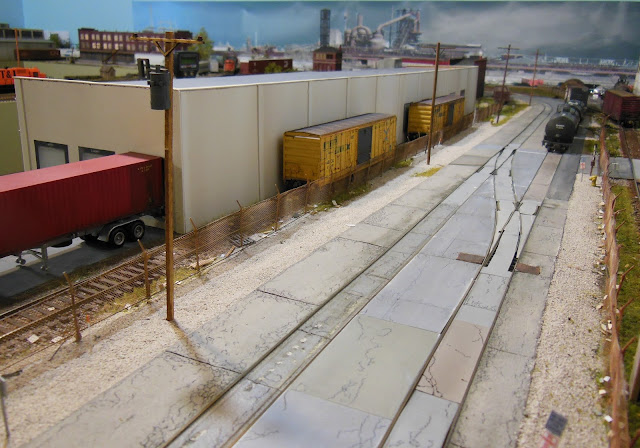 I'm trying out moving this warehouse over to the empty space created when the Wright Bridge and Tank building is removed. 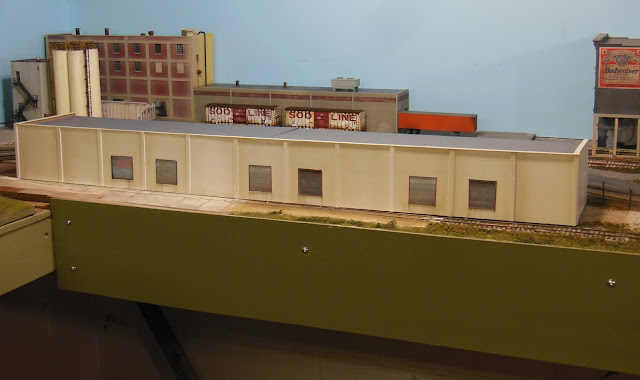 I don't think I like this set-up very well.  Just doesn't look "(W)right".  See what I did there?

And here's a quick look at a Chessie covered hopper that I weathered this week for Jamie Barron. 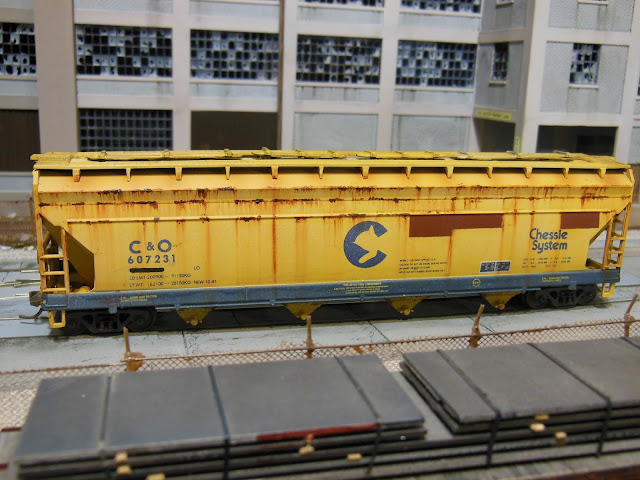 Lots of rust, some primer painted patches, and the old Capy number is painted over.

Posted by Jimmer at 08:31 2 comments:
Email ThisBlogThis!Share to TwitterShare to FacebookShare to Pinterest

One of my favourite engines to run on the layout is my blue Grand Trunk Western SD38, which sees almost constant use.  I once saw an identical engine for sale at a train show and didn't buy it. I've often thought that I really made a mistake that time, and should have picked that one up. The number was the same, but I could have changed that without too much trouble. 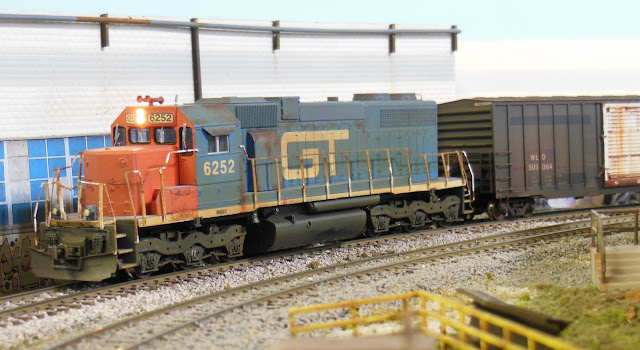 My GTW SD38 rounding a curve

I like the GTW and the jumbo sized auto parts boxcars that used to be seen around my area.  They had five SD38's, numbers 6250 - 6254, all were previously owned by the Detroit, Toledo and Ironton. My understanding is that when GT acquired their DT&I locomotives, GT simply added the number "6" prefix to the DT&I numbering system.

A couple of years ago, trouble began with this particular model of mine though, as the motor would sort of grind a bit and sometimes would just stop altogether.  I opened it up, and found the motor pretty difficult to spin by hand.

My solution at that time was to pull the motor from another SD38 I have, which I didn't really use very much.  This one is painted in the orange and black scheme of the Detroit, Toledo, and Ironton. I figured this would get my GTW engine up and running properly and then I'd worry about getting a replacement motor for the DT&I model.

So I called Athearn one January morning last year, and ordered a replacement motor right over the phone.  The guy there told me that it might be 3 weeks or so until they'd ship it out.  I was okay with that and told him so, he took my cc information and that was that.  As I said that was over a year ago now.

However, I rather recently happened to find the correct motor available on the Horizon Hobby website a few weeks ago, so I ordered it on line.  It arrived in the mail about a week and a half later.  Yay! 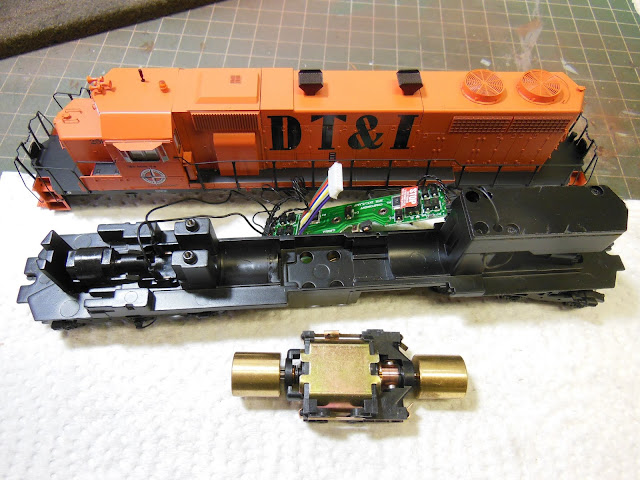 The DT&I body shell, frame/chassis, and the new motor.
The replacement motor basically dropped right in. 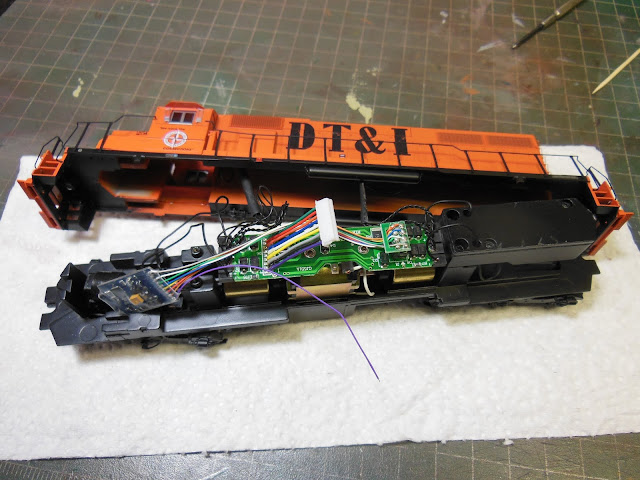 The new motor is installed here (that was easy enough) along with a basic 4 function plug-in decoder (made by ESU), and can be seen dangling loosely at the left hand end in this photo.
So, over to the programming track. I thought it might be a wise move to program the new decoder before I put the shell back on the frame, just in case of some problem arising (none did). 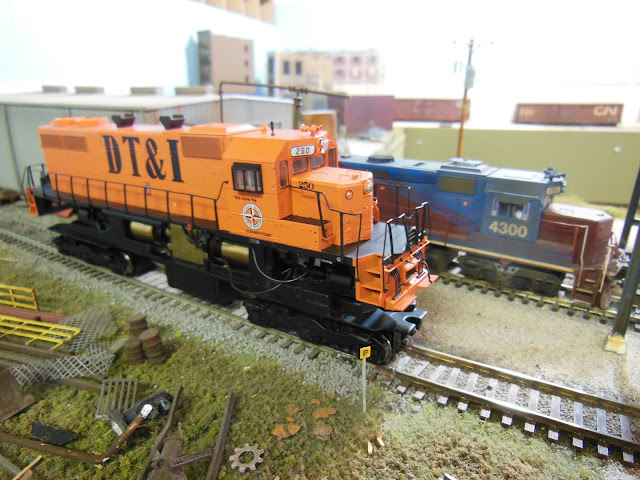 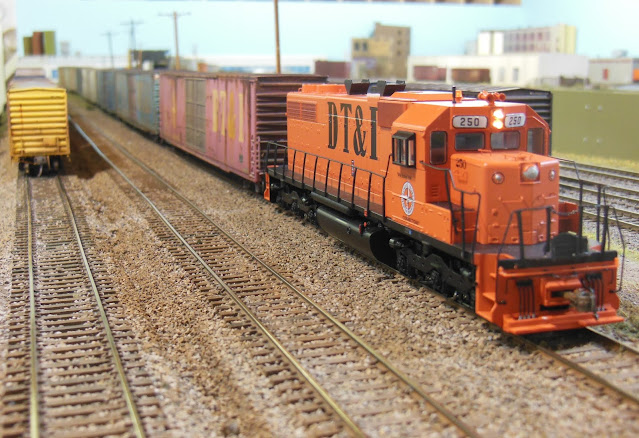 Here's DT&I 250 back in service and hauling a few 86 foot auto parts cars.  It has an orange beacon light on the cab roof.  The beacon lights up when the headlights are turned on. It's a bit difficult to see against the orange of the locomotive itself. I'm not that crazy about it. 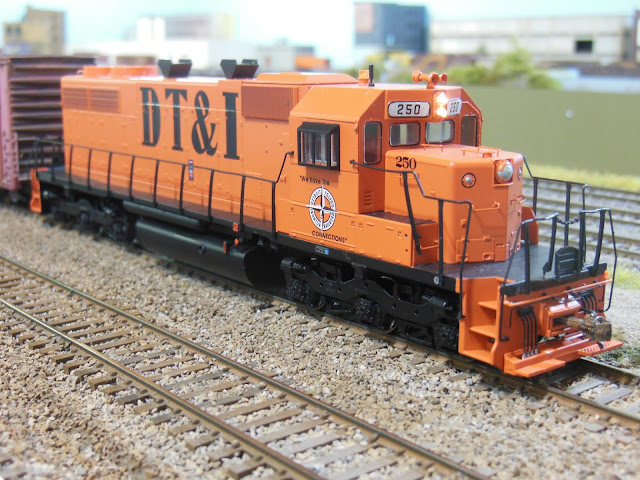 The gong style of bell on the nose of the engine is/was a neat feature of the DT&I, but could use windshield wipers installed and doesn't really belong out on the layout at all without at least some weathering too. 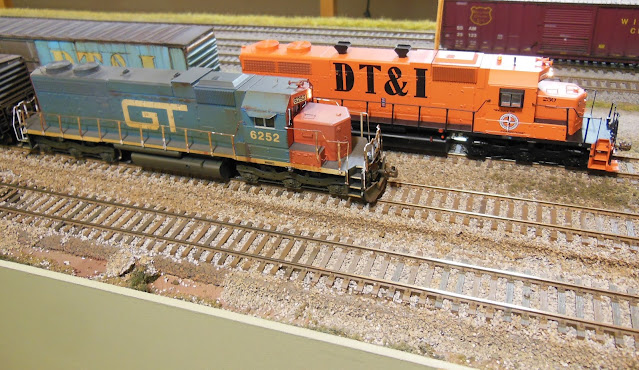 The two SD38's together.  The spark arrestors on the DT&I model are interesting.  I'd imagine that the prototype 6252 would have had them originally as well. I really ought to try to look into that and if so, try to add them as well.
Posted by Jimmer at 08:11 No comments:
Email ThisBlogThis!Share to TwitterShare to FacebookShare to Pinterest
Newer Posts Older Posts Home
Subscribe to: Posts (Atom)