As if I needed more projects...

The Woodstock Model Railroad Show was this past Sunday, in Woodstock, Ontario, and I was looking forward to it for weeks.  It's my favourite show, as there's always lots to see and find and friends to run into there as well.

I had a few small things in mind that I would have liked to have found, but mostly struck out on those.  The one thing that I did find that I was looking for was a 50 foot flat car to put into a short work train, so I was quite happy to pick that up.

My other purchases included 4 Athearn blue-box freight cars: 2 of them are 86 foot boxcars, plus a 50 foot boxcar, and a 3 bay covered hopper. I also found a Walthers REA Transfer Building at a real good price.  I've built 4 of those before, keeping one for myself and selling the others off.  If you take your time assembling it, I find that this kit always goes together particularly nicely and people really seem to like them and want them when they're finished.

So that's 6 more projects to add to the list. I'll post more on these projects as they cross the finish line. 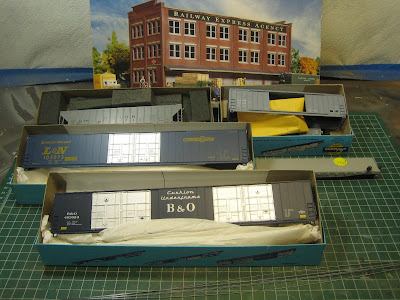 A Couple of Weathered Freight Cars

A few years back, I started to notice the weathering patterns on different freight cars, and became more interested in that than I was in the train or the car itself, if that makes sense. I bought a couple of weathered cars at train shows, but they had only had rust and grime airbrushed onto them and didn't really look right. I decided to try weathering my own freight cars, with the goal being to have all of the cars on my layout weathered, at least to some degree.

Some of those early attempts turned out pretty good, and others...well, maybe not so much.  Here are a couple of my earlier efforts that I'd call successes.  I weathered the covered hoppers for my friend Sean. I believe I actually did 5 of them for him. I remember I really liked the way the one in the 2nd picture here turned out. The fading of the CN grey was done with acrylic craft paint.

As for the boxcar, I eventually ended up selling that one. That was one of the first cars I did where I had tried to follow a picture I'd found online. I had posted pictures of it to www.Trainorders.com and, from that posting, Scott Sanders recommended I go to  www.tws-rustbucket.com, where I continue to learn from him and the other remarkable weathering artists there. That site is an incredible source of inspiration to me.

Sorry for the poor location of the pictures, but there weren't many photo-worthy locations on the JSSX back then. 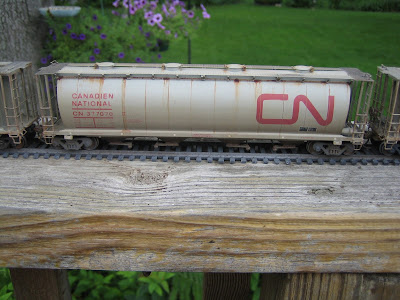 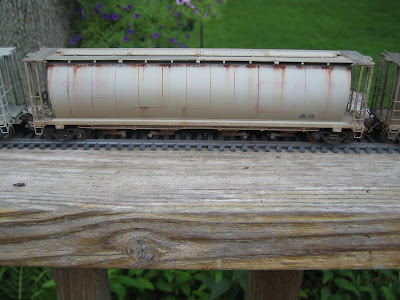 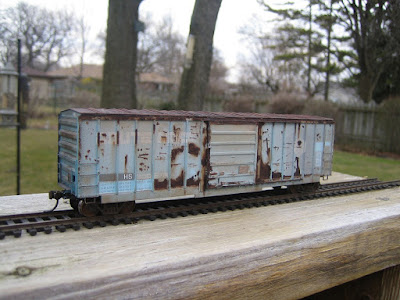 Posted by TrainGuyJim at 08:47 No comments:

Posted by TrainGuyJim at 13:43 No comments:

I realized long ago that if I was ever going to be able to include a model of ACME Welding on my layout, I would pretty much have to build it myself...from scratch. That could be...umm... interesting...I mean fun. I thought that at about 4" x 6" the model won't really be all that big anyway, so I could do this, right? Most of the materials for such a building could probably just be taken out of my scraps box.  So, here goes...

Once again, a photo of the prototype building, in London, Ontario. 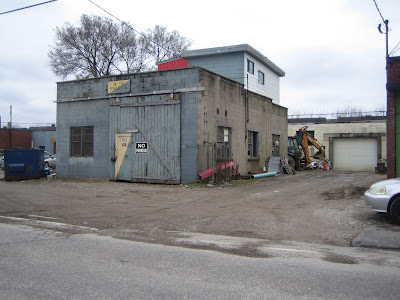 I found windows that are pretty darn close to the prototype's in size (scale size, that is) to use on the main floor of the building on the Tichy website. I ordered them and they were here in about 10 days. Once they arrived it was time to actually get this little project underway. I didn't have actual measurements of the prototype dimensions, so I simply did my best to count the number of concrete blocks to get the building's length and height. With no photo of the rear wall of the building, I just went with my best guess for that.

For the large sliding door at the front of the building I could use a bit of scribed lumber that I've got around here (somewhere), and the entry doors and the upper storey windows are leftovers from an old Pikestuff kit. The upper windows will be over-size, but, oh well... I don't know who makes the concrete block styrene sheet that I had, but there was enough of that on hand. The upper level annex is built with scraps of Evergreen styrene. And I have some brass screening that I could put over the windows for security against any HO scale break and enter artists.

Here are the walls, cut from concrete block sheet styrene, and rough layout of the front door. I omitted the middle window on the left hand side of the building, just because I liked the way it looked. 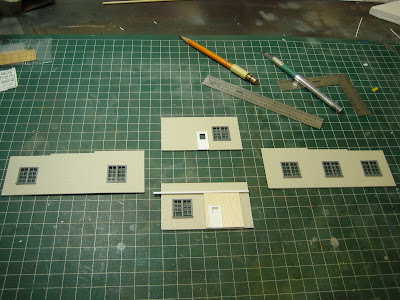 I then traced the outline of these block walls onto .040 sheet styrene to make the inner layer of the walls, and scribed and snapped that material wherever needed to create the window openings. I should have taken a picture of that, but never thought of it at the time. Then I glued those .040 pieces back together with the window openings removed and laminated the concrete block over top.

Below, this thing is actually starting to come together. That'll be the chimney laying to the left. A couple of cross braces help keep the walls straight and provide something for the roof to rest on. I guess that makes them roof joists.

As can be seen from the prototype photo, the front facade of the real ACME Welding is painted grey, but the side walls are just the bare, naturally weathered, concrete blocks.  I sprayed the front wall with Craftsmart Gray acrylic, and later brush painted ModelFlex Concrete Gray on the other 3 sides. 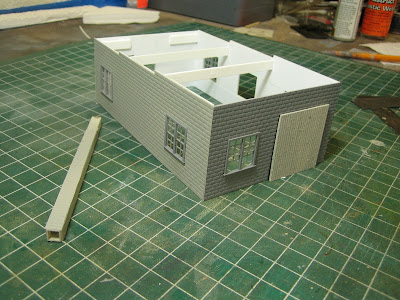 View of the rear of the model.  I don't have a photo of the rear of the prototype, so I just took a best guess for that. I figured there's got to be an exit door back there at least, and likely a window too. I never thought until afterwards to check on Google or Bing Maps for an aerial view of the prototype.  When I did, it turned out I was right on both counts and I got their locations pretty close to right too. 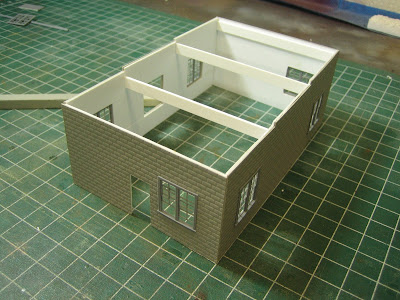 The aerial or birds'eye views even showed me the sloping rooftop over a covered stairway to access the upper level. I had kind of wondered how someone would get up there. The Pikestuff windows I used on the top level are too large and I somehow got their locations in the side wall mixed up. I'll have to re-do the 2nd level sometime in the future after I find better windows.

The Pikestuff access doors I had had window openings in them, so I covered over both doors with .005 styrene. The door track for the large sliding front door is a piece of Evergreen styrene angle.

The No Parking sign is a scaled down print-out from a photo of the actual sign on the front of the real building. If I had been smarter, I would have done the same thing for the business sign at the top of the front facade, and maybe for the front entrance door too. I painted those by hand though and then used Microscale decals for the lettering and numbers. The various small steel plates are .005 styrene.

I did the grimy weathering streaks by brushing on the water soluble type of artist oils that come in those little tubes. I moistened a flat brush with MicroSol for the thinner. On the side wall, I used short pieces of .030 styrene to simulate the electrical conduits and fittings.

This little business is going to fit in really nicely on the JSSX. 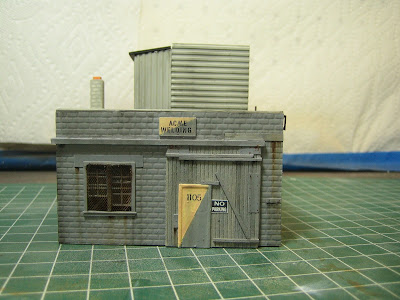 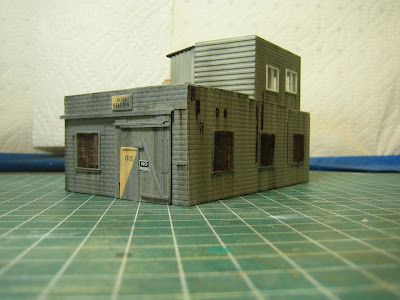 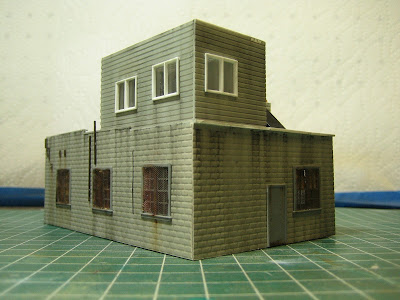 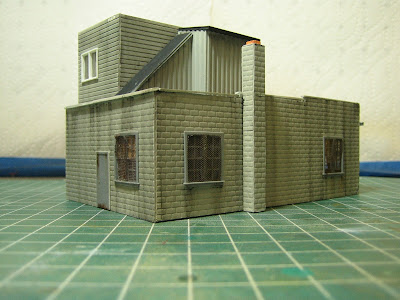 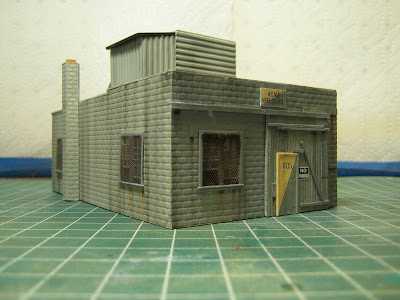 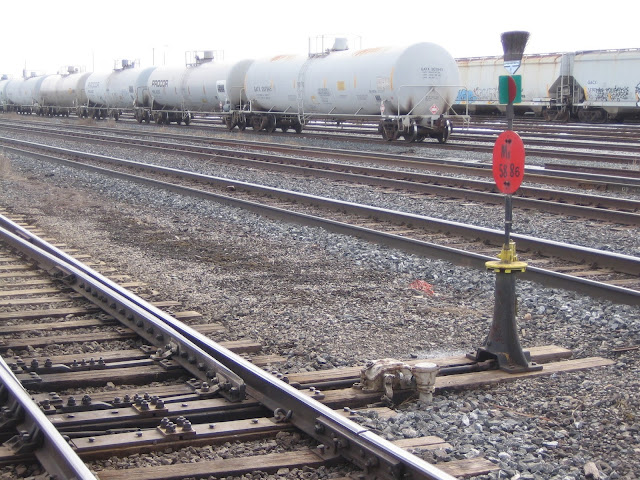 Posted by TrainGuyJim at 06:47 No comments: