A Pair of Gondolas

Earlier this week, Brian Smith sent along this very nice picture of HBIX (H.Broer Equipment) 9159, an SW 1200, sitting in St.Thomas, Ontario. Thanks Brian.  This would make for a really nice model.. 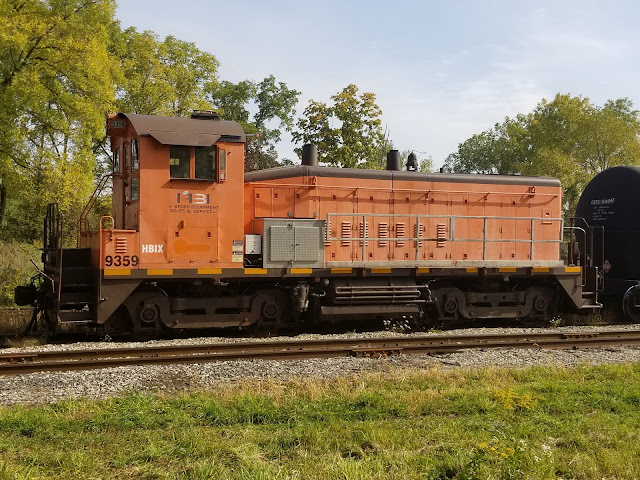 Not usually too crazy about orange painted locomotives, but I do like the way this one has faded down to a pastel tone.  I don't know what exactly that grey box on the side is for, but that handrail sure is distinctive!.

Brian advises that the locomotive is being sent to the Lambton Diesel Specialists shop here in Sarnia.  I'll be keeping an eye out for it, although I doubt if I'll be able to get very close to it.  The LDS shop is located on CN property, and to get there, you have to drive past the CN police office.

I thought I'd feature this pair of RailGon gondolas this week, weathered for Jamie Barron. 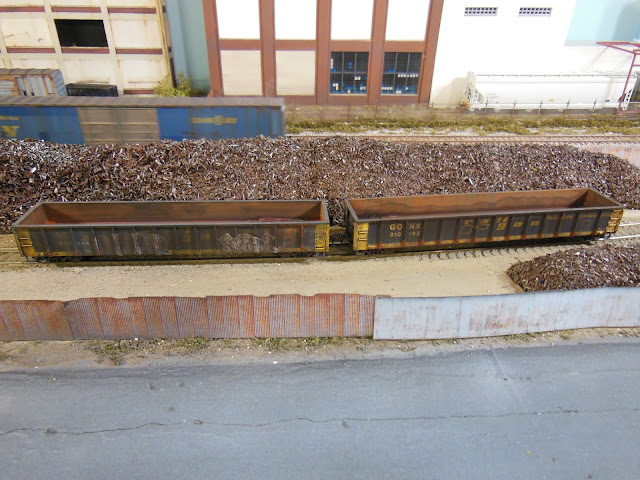 The 2 RailGons spotted together in the scrap metal recycler's yard. 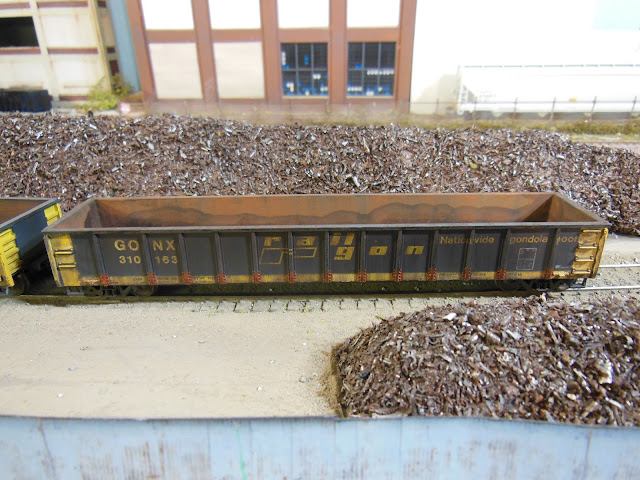 Rusty and stained interior, anti-rust paint at the bottom of the ribs, and overall road grime on this gondola. 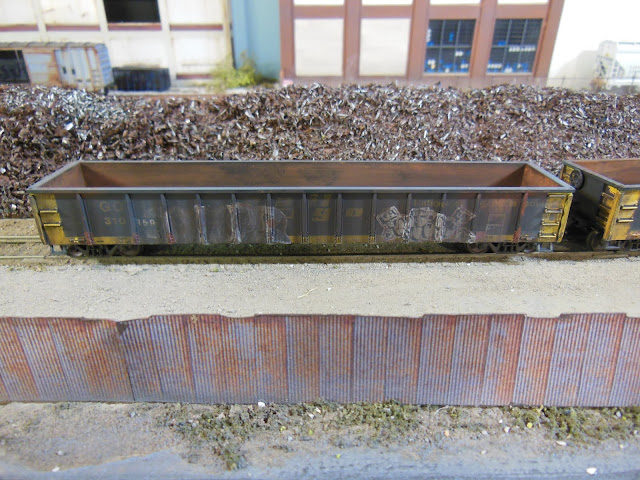 The original black on this gondola was flattened down by brushing on multiple layers of  thinned acrylic "Espresso" brown craft paint. The years-old graffiti are decals, applied and then weathered over top.  It took some effort to get the decals to settle properly over the vertical ribs. The graffiti covered over part of the reporting number, so new numbers in a different font and colour are applied.

Posted by Jimmer at 07:29 9 comments:
Email ThisBlogThis!Share to TwitterShare to FacebookShare to Pinterest

The JSSX Railway blog has hit 3 years old this week.  My thanks go to everyone that looks in here.

Last week, I wrote that I'd have more done on my 86 foot SSW boxcar. And I do have, although it's still not finished up it is edging closer. A week ago, this is the way It looked...

The grey stripes obviously not finished up.

So as of last night, the boxcar is looking like this... 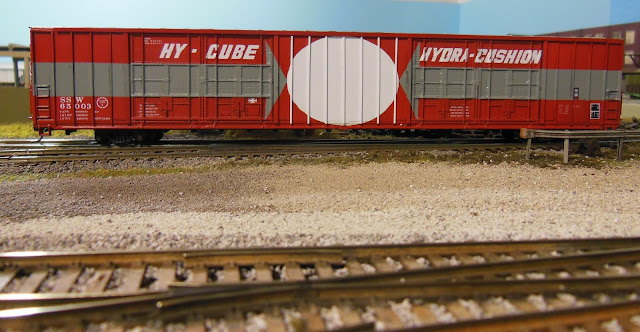 The big white circle for the Cotton Belt herald was made by tracing a similar spare SP herald onto white decal paper and cutting it out with a sharp Xacto knife.  And when I say sharp, I know what I'm talking about...I'll spare everyone from having to look at my index finger as evidence (no stitches required, but it wasn't pretty).

Anyway, with the homemade circle decal applied and dried, I've added the vertical ribs overtop, using Evergreen'e .030 x .030 styrene strips cut to length. I used ordinary white glue to attach them.  I'll hand paint the portion of the ribs outside of the circle with red.

I had to cobble together the word "Hydra" from other parts of the decal sheet I'm using, and there is no "D" on the decal sheet at all, so I made one using a "C" and a "B".

And speaking of decals, the words COTTON BELT that are to go on the centre section of the boxcar are unavailable (so far as I know) in red letters, so I'm hand painting the red over the white letters on this old Cotton Belt decal set that I've had for years. 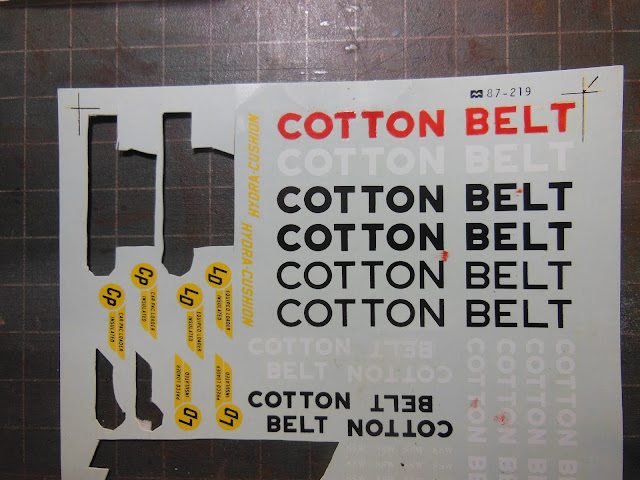 The letters on this old decal sheet are the correct size, but I need to paint them in red to match the colour of the boxcar.  Not easy, but not quite impossible either. I've unintentionally painted "outside the lines" a little bit, but been able to clean them up pretty well using a damp toothpick. I can do more touch up later, plus I still have the second set to paint as well. It's been so many years that I don't remember what I had used the missing decals on the sheet for.

On the layout itself, I added in this detail Fibre-Optic cable box, made by GLX. 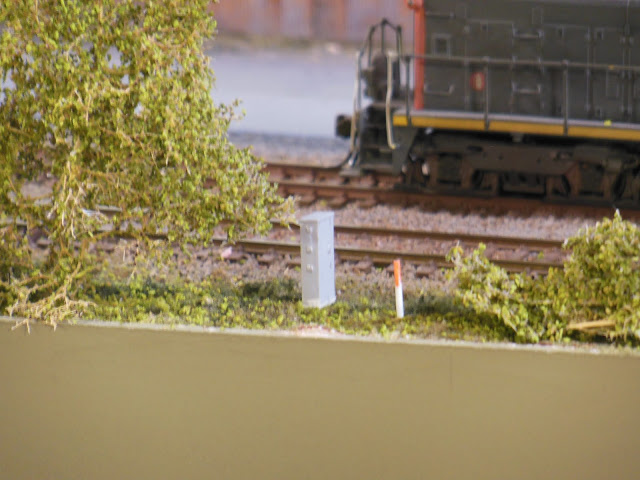 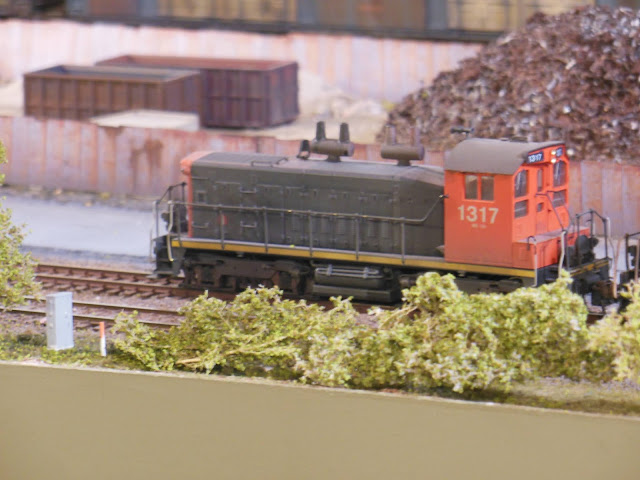 Posted by Jimmer at 08:19 No comments:
Email ThisBlogThis!Share to TwitterShare to FacebookShare to Pinterest

Brian Smith sent along this very sharp looking picture CN 4730, a GP38-2 built in 1973.  Brian took the photo last Saturday at the yard in Huntsville, Ontario.

Not sure how this could be modeled, but maybe paint the long hood white, then a layer of chipping fluid, and paint over that with black acrylic.  Then start removing most of the black until the effect in the photo is achieved.  As for the primer coloured diagonal stripes...maybe paint stripes from a decal set and apply them.  That's two maybes. Best of luck to anyone that tries them. 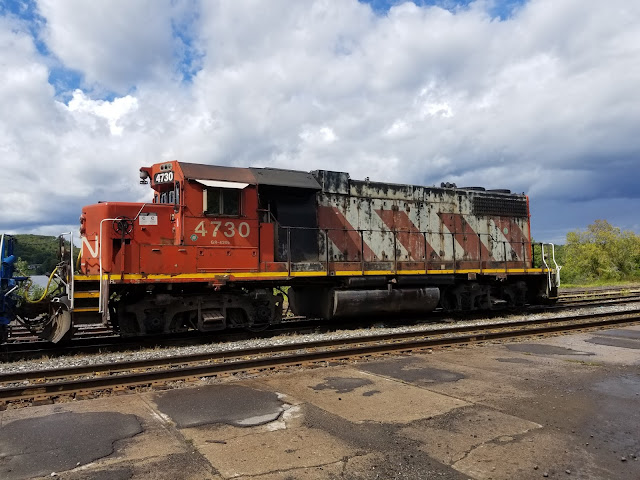 The concrete platform in the foreground looks to be just as worn as the paint on the locomotive.
Here at Sarnia's "C-yard", is this Pullman-Standard 4-bay plastic pellets hopper.  It appears that the roof has become quite rusty, and the rust has been streaking down the side panels for some time. I wonder just how the 9 ribs got scratched that far up the sides. 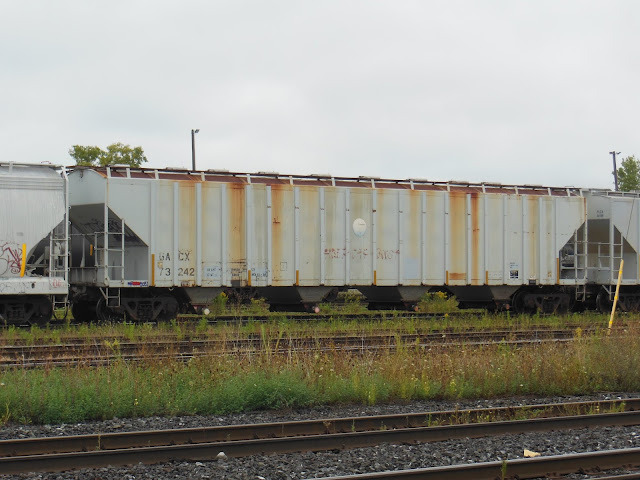 Unfortunately, to the best of my knowledge, no plastic model of this type of PS covered hopper is available.
Back to the HO stuff, below is a CN boxcar owned by Jamie Barron, given a light weathering with slightly faded paint and a few rusty scratches. I thought that the roof rust turned out very well. 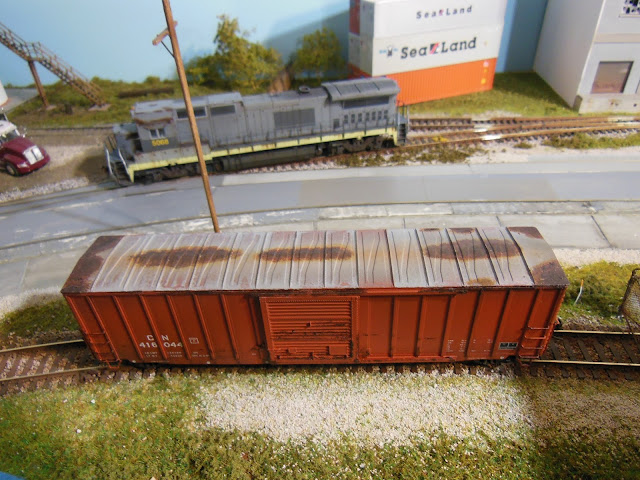 I added most of the exterior ribs to an 86 foot boxcar that I'm converting, with the intention of painting it as an SSW (Cotton Belt) auto parts car. This should match up well with two of the same type of boxcar that I've done in the past and decorated as Southern Pacific.
In the photo below the boxcar body has been painted with primer, and the wheels and trucks are painted with Krylon Camouflage Brown. That's my scratch-built (can you tell?) painting stand that I take outside when spraying with rattle can paints. 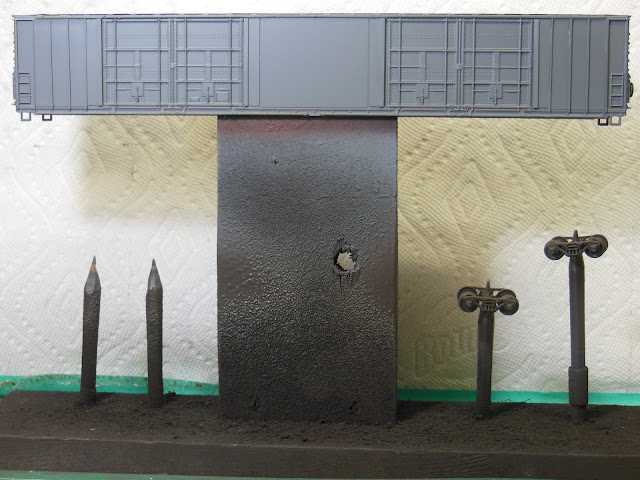 The boxcar is painted red and the grey decal striping is underway.

Applying the decal stripes is a pretty meticulous job.  Microscale sells the striping and arrows as a set, but there are so many ribs and both horizontal and vertical posts at the doors that I've found that they simply cannot be laid on in one piece.  It helps if I limit myself to doing just a little bit at a time and move on to something else. The ribs in the area between the doors will be added at the end.  I should have more on this car done for next time.
Posted by Jimmer at 08:16 2 comments:
Email ThisBlogThis!Share to TwitterShare to FacebookShare to Pinterest

Not a great deal has been happening on the JSSX this past week, but a couple of little things have been accomplished

I have posted up a new photo for September up at the top of the blog.  With the rail entrance to the scrap metal yard on the left, and a string of 86 foot auto parts cars on the right, I thought it made for an interesting view.

I received two more of the GLX Derails recently, and installed one of them on one of the spurs along South Industrial Bloulevard.  This is a neat little detail, and it certainly adds an interesting something extra to the switching job.

I've posted about another GLX derail in the past as well, but this is a new one, so at the risk of repeating myself, here goes... 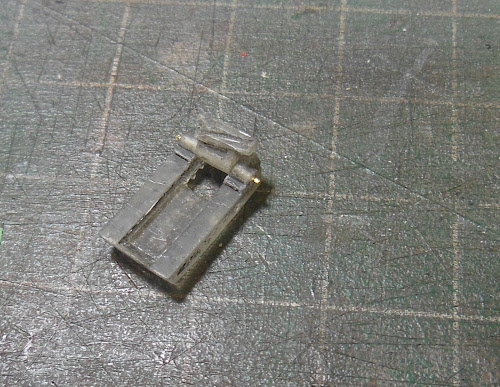 The GLX Derail is moulded in a greyish translucent plastic. It only took about 5 minutes to clean up with a small file, drill the #74 hole for the brass wire hinge, and assemble. 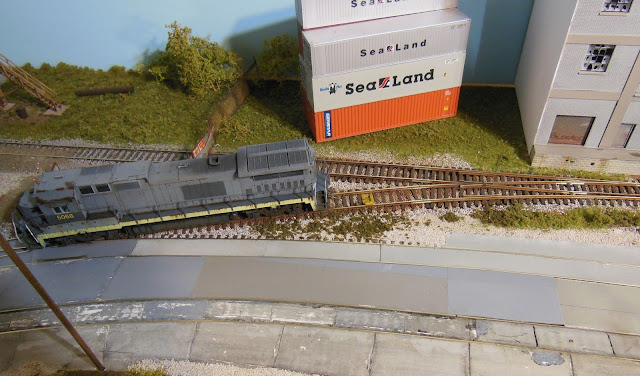 The derail is painted in yellow, and placed at this location to prevent the rail cars (out of the picture to the right, sorry) from rolling out onto the street. 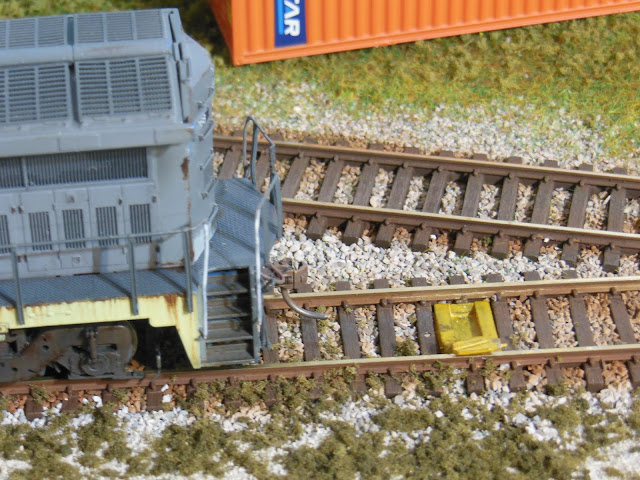 Someone from the train crew (me) is going to have to open up the derail each time access the spur is needed. 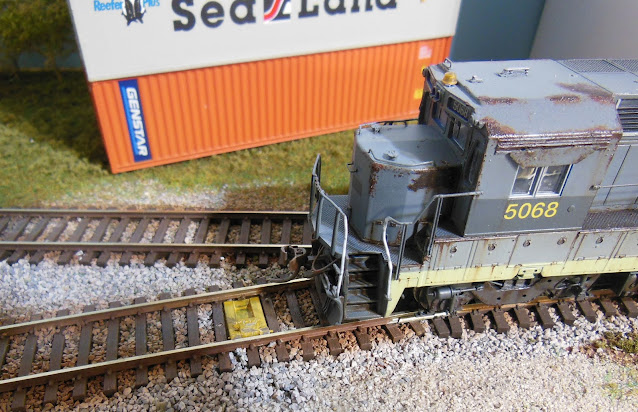 The train crew (me again) will have to close the derail when they leave the spur. The purpose of the derail at this location is to prevent freight cars from rolling out onto the street.
One other thing that I got done this week was in response to an observation that Mike Ferrell wrote in the comments 4 weeks ago.  Mike pointed out that the stairs to one of my storage trailers should be shifted over to the right instead of in the middle of the rear trailer doors. 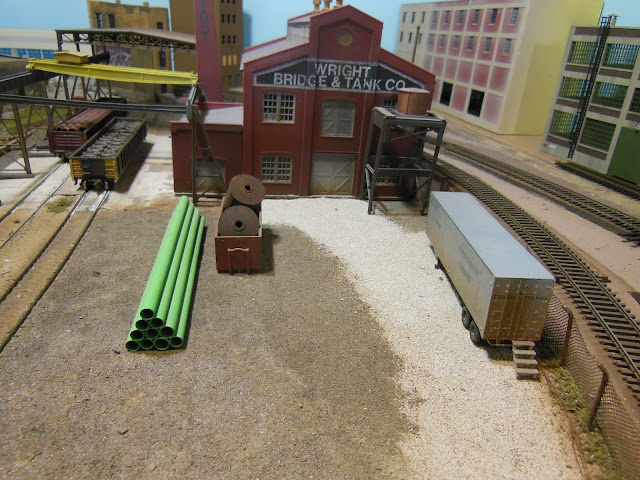 Mike was right, and now I've got that work order completed as well.
Posted by Jimmer at 08:25 2 comments:
Email ThisBlogThis!Share to TwitterShare to FacebookShare to Pinterest
Newer Posts Older Posts Home
Subscribe to: Posts (Atom)