A trio of coil steel cars have come into view along the GTW line. These three cars all belong to and have been weathered for Jamie Barron. 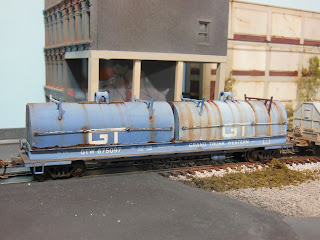 This GTW car looks to have been out in the weather for several years. 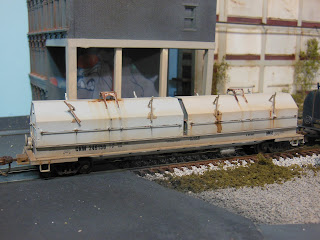 CNW looking a little faded, with a bit of rust streaking also. (I've fixed that support on the left hand side since I took the photo.  I hadn't even noticed that slight bit of damage until I posted the photo here) 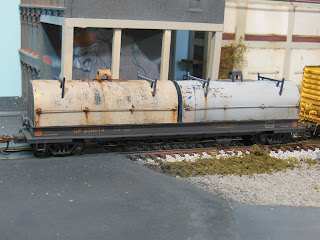 The gondola portion has picked up some general grime, but the covers of this UP car now appear pretty well faded and worn.
I don't really know how the inside of these type of cars appear, but I decided I ought to do a bit of  weathering in there too. They'll look better if Jamie should feel like occasionally running the cars with the hoods removed. 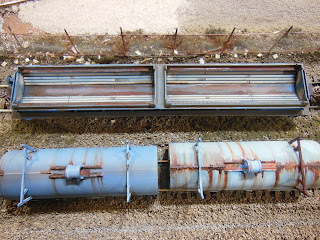 Looking down on the hoods and interior of the GT car 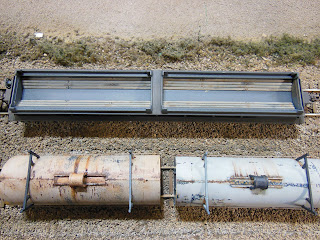 Inside the CNW car 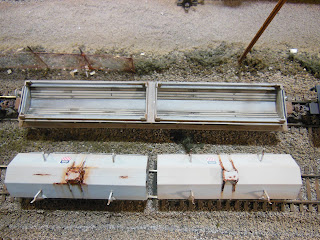 And the interior of the Union Pacific coil car
It's Christmas morning, so I'll close this out by wishing every one of you and your families and friends all a very Merry Christmas
Click the link below:
https://www.youtube.com/watch?v=OJ8qjdxxzzE
Posted by Jimmer at 06:56 2 comments:
Email ThisBlogThis!Share to TwitterShare to FacebookShare to Pinterest

After having some success a couple of weeks ago upgrading the area of the scrap steel pile at the recycler site, I thought I'd best get busy and follow up with similar work around the non-ferrous metal pile as well. Below is a couple of "before" looks at the aluminum pile and the surrounding area. 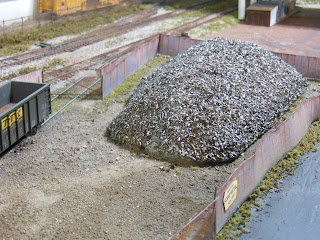 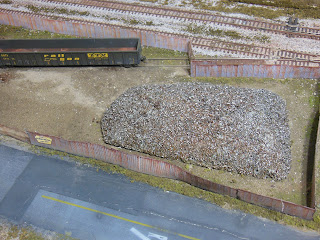 A drone-style "before" view of the non-ferrous pile
I had a small bag of the tiny bits of aluminum that Brian had given me, so I spread some of that somewhat randomly around the base of the pile 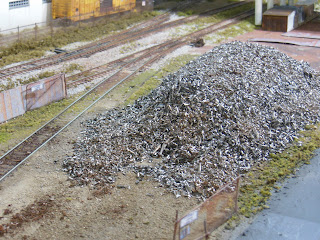 I removed the fencing around the site, as it is paper adhered to styrene. Moisture from the diluted glue I was about to use could "wick" up the paper and stain or discolour it. The fence can be seen laying in the background of the photo. 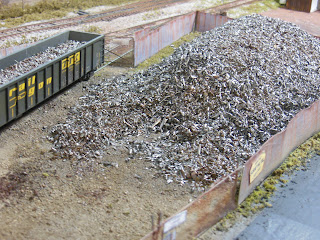 Here's the view of my non-ferrous metal pile after the additional material has been added and the fencing is back in place.  The GT road switcher could be along almost any time now as it looks like the TTX RailGon that appears in the first couple of photos is loaded now as well.
Posted by Jimmer at 07:23 3 comments:
Email ThisBlogThis!Share to TwitterShare to FacebookShare to Pinterest

Friend Luc asked recently if I would be interested in weathering this Atlas model Caustic Soda tank car for him, and sent me photos to use as examples of how much weathering he wanted on the car.  I'm not crazy about having to do weathering on white cars, but this one kind of caught my interest, so...

Below is the prototype photo that I was sent: 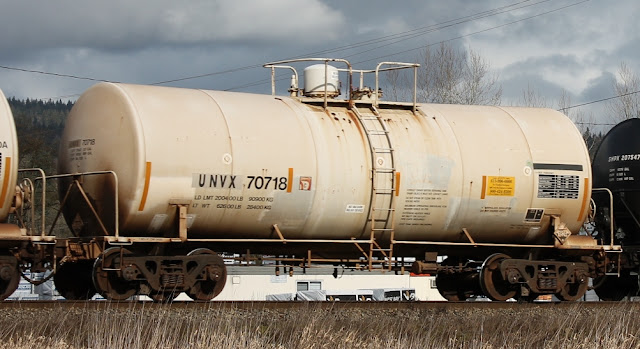 Sorry, I don't know who took the photo, but credit to that person. I looked for it on rrpicturearchives.net , but it wasn't on that site. 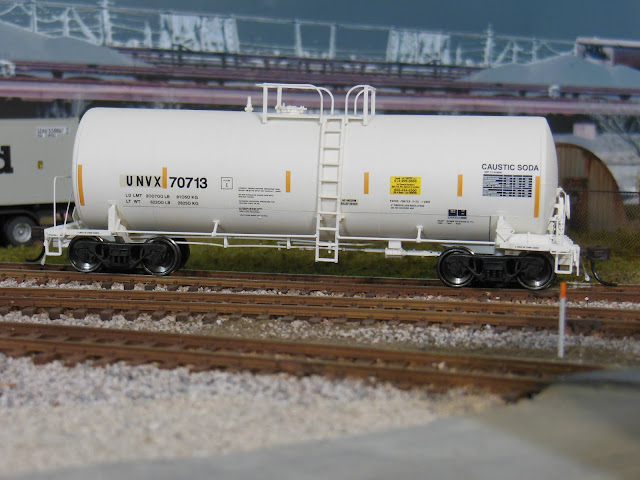 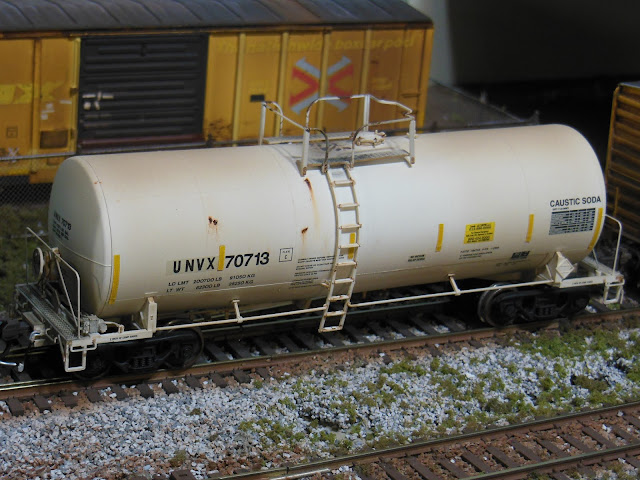 I mixed Craftsmart brand acrylic paints "Espresso" and "Light Yellow" and thinned the mixture with ordinary tap water.  Yes, the colour change is subtle, but it's way easier to add more colour later if necessary than it is to take it off. 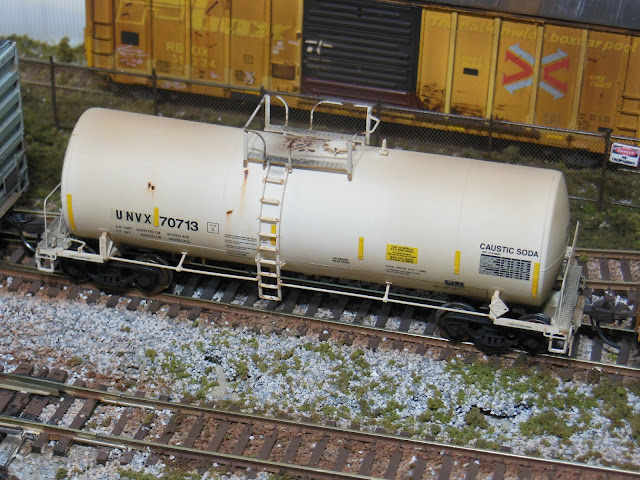 Showing a bit of wear on the area around the top hatch.  This was done with a little flat black sprayed in that area of the car, and then a little bit of burnt sienna and burnt umber artist oil colours is stippled on top of that. 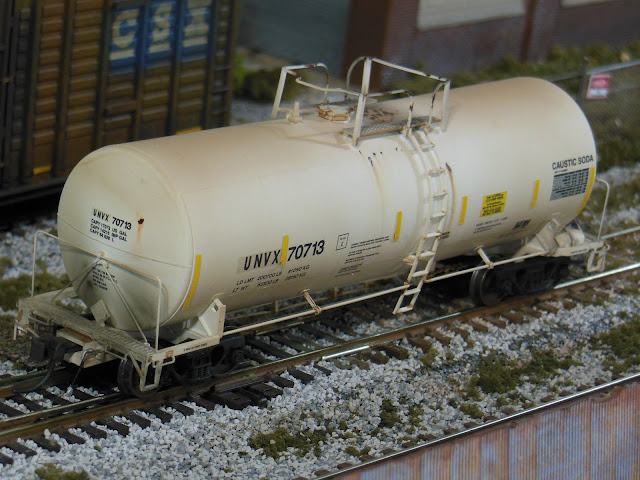 This view shows the other side of the tank car.  The rust blisters and accompanying streaks are also done using the burnt sienna and burnt umber. 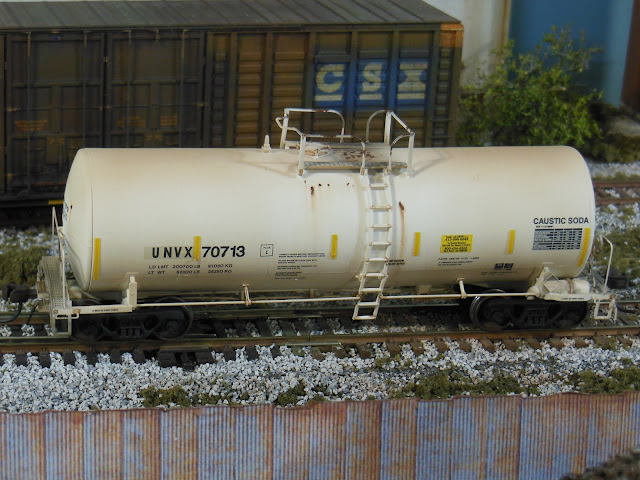 The model had the reflective stripes painted on at the factory.  I put Smokebox Graphics stripes over top of the originals, but (oddly) they are just about 1/32" shorter than those painted-on ones.
Here's a really short YouTube video from Boomer Dioramas.  The CN engine looks great, but it's the industrial building that really caught my eye.

Posted by Jimmer at 07:52 3 comments:
Email ThisBlogThis!Share to TwitterShare to FacebookShare to Pinterest

The Ground at the Scrap Metal Recycler

3 weeks ago, I posted this same picture (below) featuring my pair of GTW GP38-2's switching at MidWest Plastics.  What was interesting to me though was that 2 readers, Ken and DandH, left comments focusing on the metal recycler industry in the foreground.

Both felt that the ground surrounding the pile was too neat and square. Well, in all honesty, they weren't wrong.  Note how "squared off" the scrap pile appears. 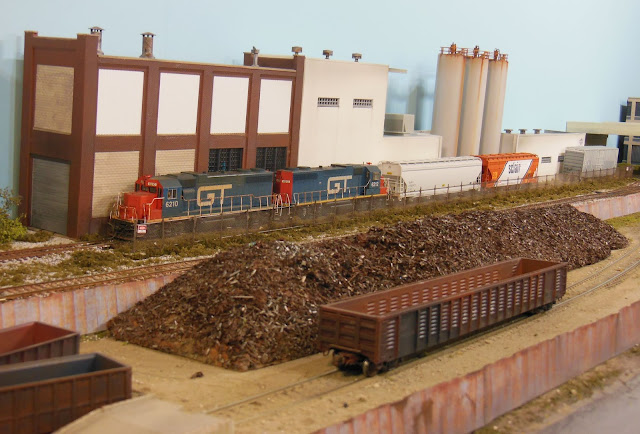 I searched for and found a small plastic bag that I had with just a little bit more of the metal chips that I could scatter about this industry to try to make the place a little less tidy.
I sprinkled the little bit that I had all along the base of the pile to sort of soften the piles' edges, and all along both sides of the track.  I then added the rest of the material in between the rails as well.
Since the material is actual ferrous metal, and the electric motors in our model engines have magnets, I though I'd better make darn sure the metal was glued down well.  Really well.  Which brings us to this next photo... 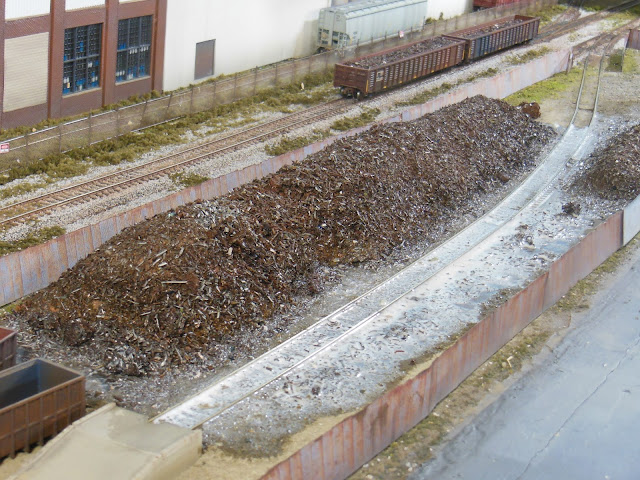 All of that white area in the photo above is diluted white glue covering the metal chips that I had spread around. I first sprayed the area with diluted isopropyl alcohol so that the diluted glue would flow easily among the metal shavings. I know, it looks brutal at this stage.  I was a little concerned that maybe I overdid things a bit with the white glue, but I don't really think it will be a problem.
The glue is almost completely dry after sitting overnight, and we can see where the metal has been spread all along the ground. 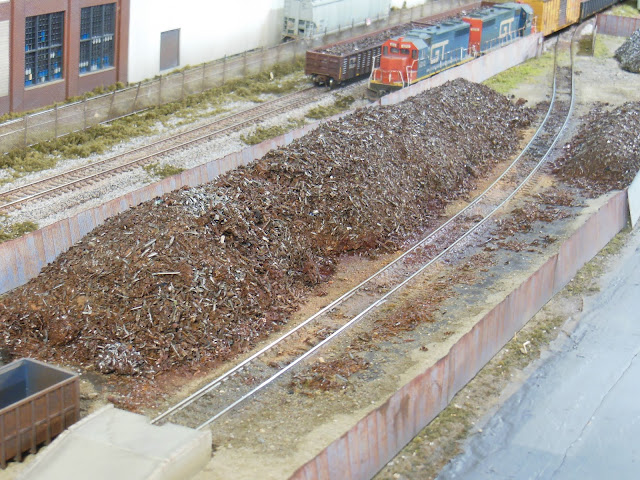 My next step was to brush and airbrush a variety of rust colours along the track.  I wanted to try to give the appearance that rust had run off the metal onto the ground.  Here's the rust colours that I used. 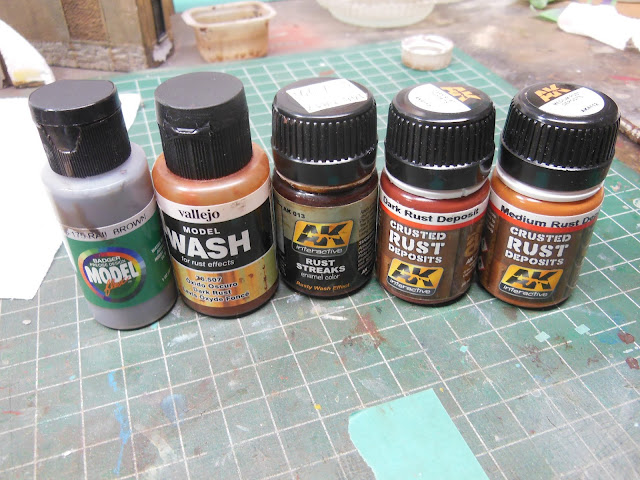 Here's a closer look at the the ground  and track within the recycler yard. 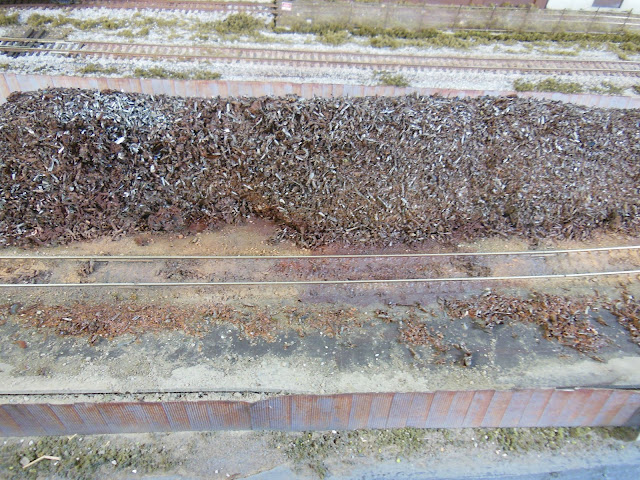 So, with everything dried and the rails cleaned off, it was time to test the spur track to see if I had created any electrical issues, as well as check if any of the metal scraps were impeding locomotives or freight cars as they make their way along the spur.
SD40 3415 happened to be handy, so here it comes to check the spur for any operating trouble. 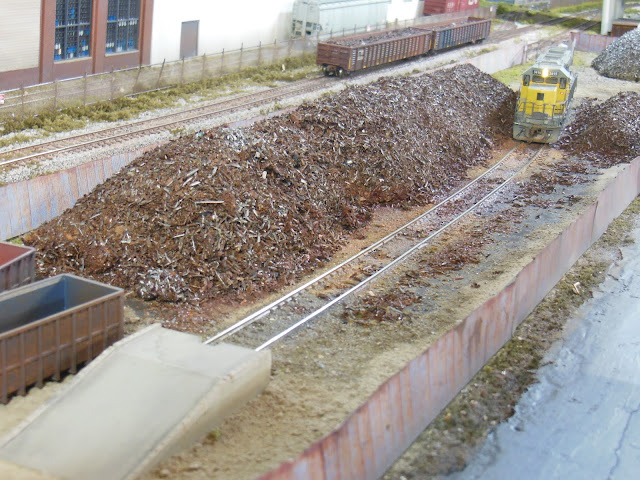 All was good when 3415 ran in and out of the spur a few times, so two gondolas have been spotted into the industry and been loaded. 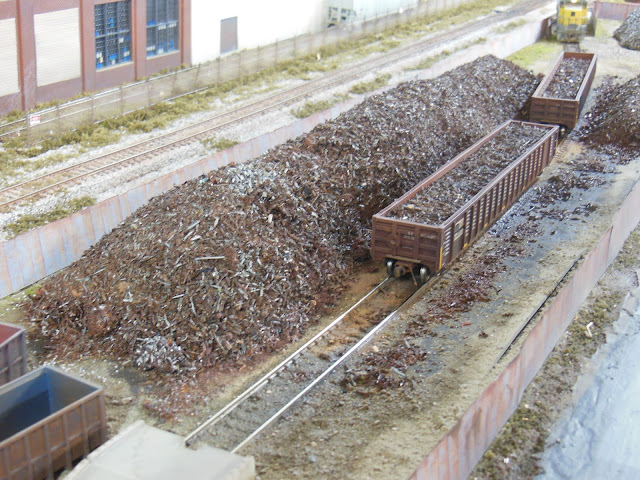 I think the area has a higher realism to it now.  So thanks to Ken, DandH, and to Brian too for giving me those metal chips in the first place.
Posted by Jimmer at 07:43 5 comments:
Email ThisBlogThis!Share to TwitterShare to FacebookShare to Pinterest
Newer Posts Older Posts Home
Subscribe to: Posts (Atom)