In my pictures file, I recently ran across this photo of a former Milwaukee Road waffle-sided boxcar. This photo was taken by Eric Erholm in Tulsa about 10 years ago, and I had saved it for myself from the rrpicture archives website.

I happened to have a fairly similar, but not exactly the same type, car from ExactRail out on the layout. I had already patched and weathered it.  I decided to throw caution to the wind, and take a crack at adding the two graffiti tags to my model.  This is my 2nd attempt ever at graffiti.  The first one sold quite quickly at a train show.
I opened the picture up in "Paint Shop" and cropped out everything but the boxcar, and then corrected the perspective so that the image would appear as straight as I could get it.  I then printed out the image on paper to 210 mm in length, which is about the overall length of the model.  Doing all this did distort the height of the boxcar in the image somewhat, which surprised me a bit.
Regardless, I cut out the two graffiti tags, and then traced the outline of them onto the side of the model with a pencil.
I painted the area inside the lines in white. It took 3 coats of white to fully cover over the yellow, and then I sketched in the shapes of the letters by hand.  I'm no artist, but I did the best I could.  With that done, I painted flat black over the pencil lines with a fine tipped brush and filled in the spaces to form the letters.

Just the white area of the one tag painted in.
It all looked too new against the weathered side of the boxcar, so I mixed some white and grey craft paint and sprayed that over the tags to dull them down.  There was a bit of that paint mixture left over, so I gave both sides of the boxcar an overspray with that, which weathered the yellow down more than it already had been. 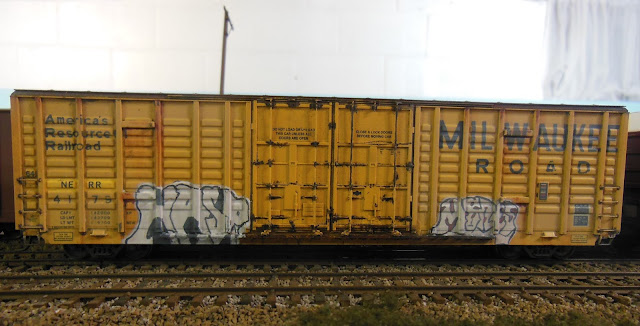 All finished up...I think that the black hand painted outlines of the letters is a little bit thick or heavy, but this hasn't turned out too badly.
Just for interest's sake, here's a photo of that first graffiti attempt that I referred to above... 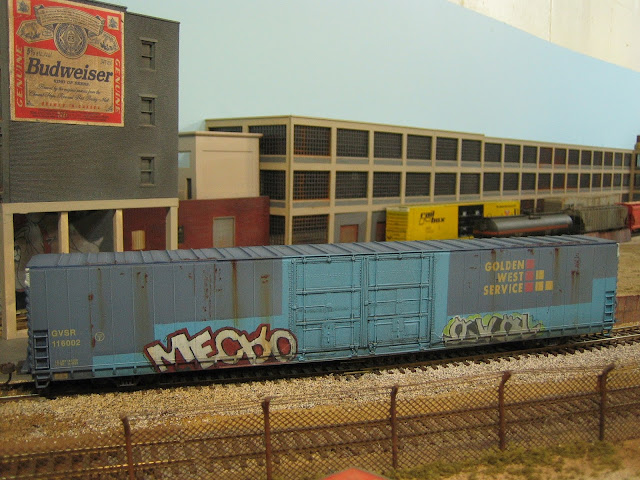 Posted by Jimmer at 08:01 3 comments:
Email ThisBlogThis!Share to TwitterShare to FacebookShare to Pinterest

Seeing Red on the JSSX

The JSSX is happy to have been recently awarded the contract to carry out some light maintenance on a number of locomotives for the Brownville & Ashland Railroad, owned and operated by Luc Sabourin.

This maintenance mainly involved light paint touch-ups, particularly on delrin plastic handrails where the paint had flaked off, but also a few other small spots, such as the plows where paint had chipped.  Also, the JSSX shop forces (that's me) added DCC decoders (the plug-in kind) to 3 of the  B&A locomotives.

The red paint schemes of the Brownville and Ashland made for quite a vivid change of pace at the JSSX, where dull and dingy locomotives are the norm.

Here's a look at some of the B&A power fleet... 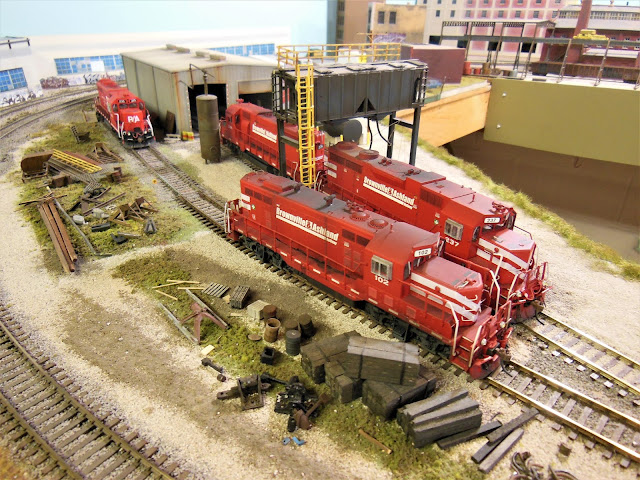 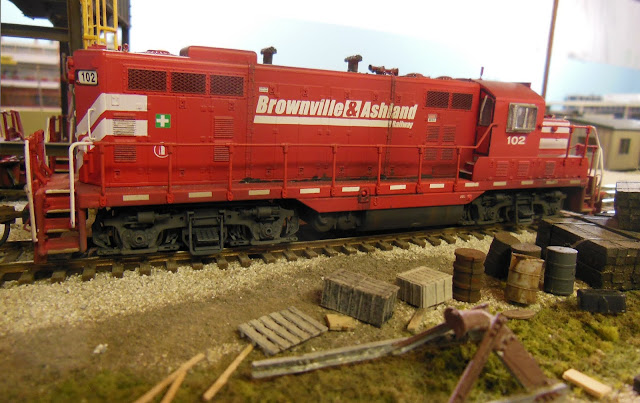 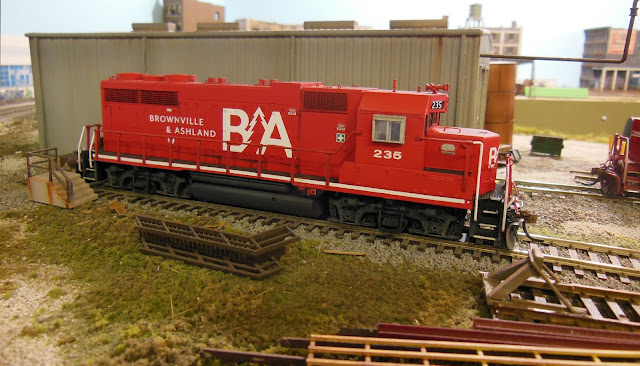 235 is a GP35, and sports Brownville & Ashton's newer style of corporate style with the pine tree graphics. 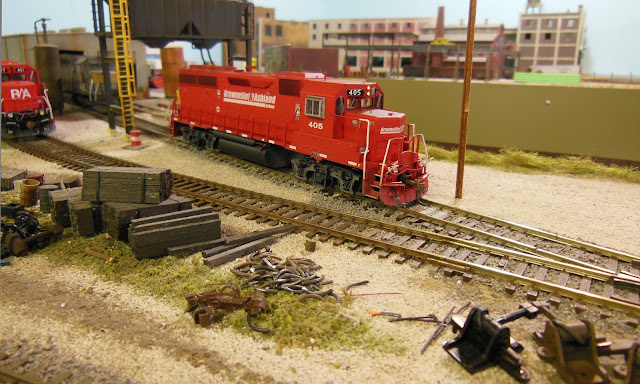 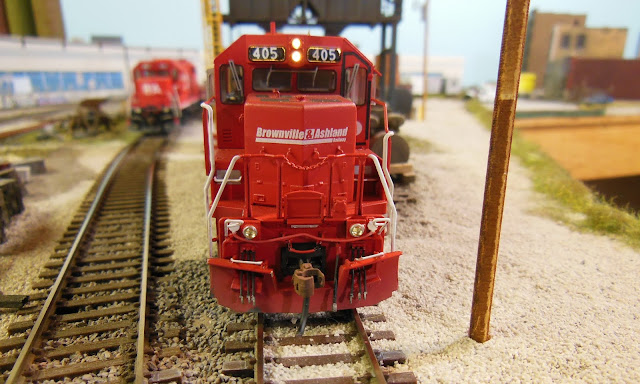 All of the Brownville and Ashland locomotives are very nicely detailed 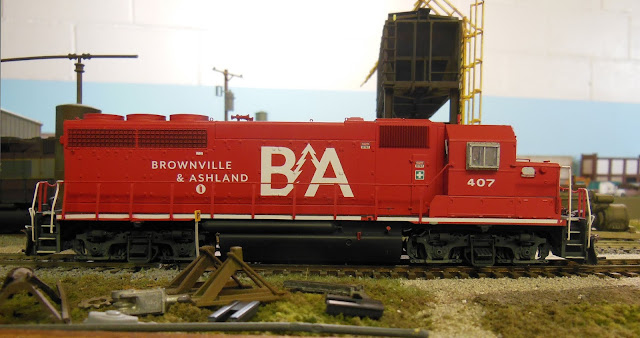 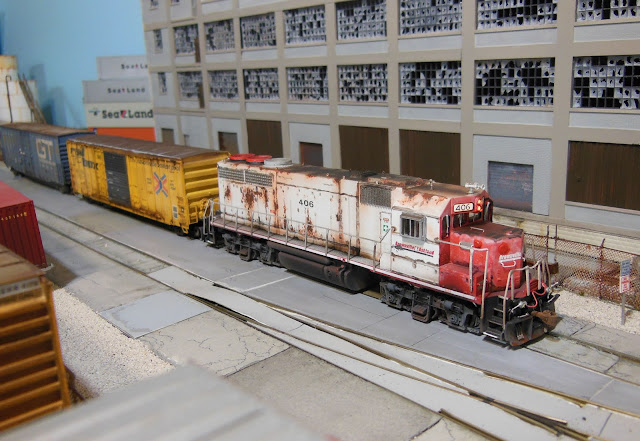 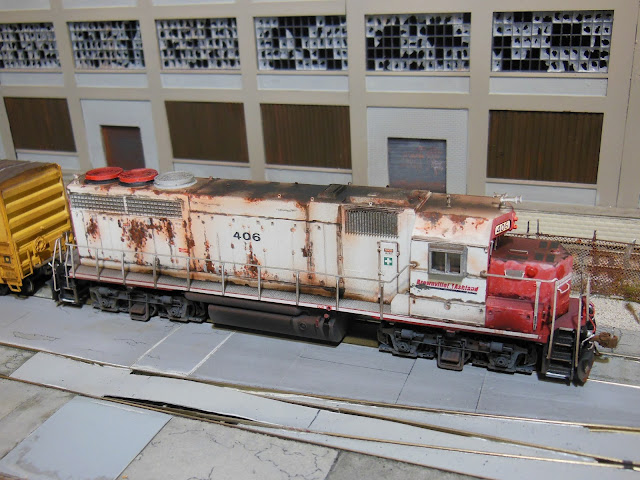 Great weathering.  Notice the replacement fans, and the peeling clear coat and anti-slip patches on top of the short hood. 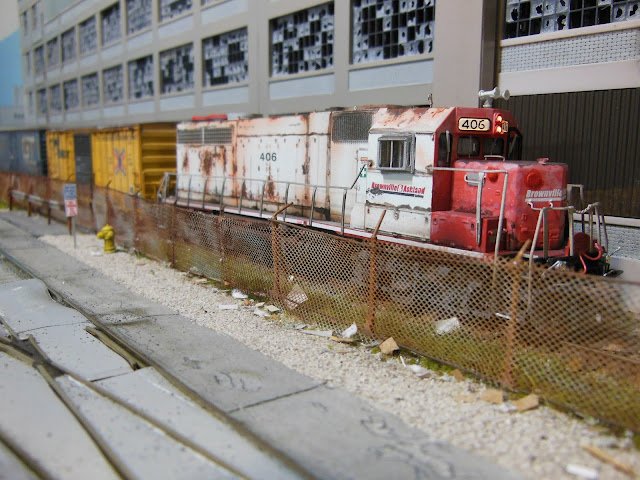 Looks like JSSX will owe B&A a few power hours
Posted by Jimmer at 09:31 6 comments:
Email ThisBlogThis!Share to TwitterShare to FacebookShare to Pinterest

First up, I was sorry to have read that the Woodstock (Ontario) Model Railroad Club has been told they have to move out of their location by the end of the year.  I had missed their original post about this back on July 21st.  They're looking for a new location, but don't sound very hopeful.

I remember when our old Sarnia Club had the same sort of thing happen many years ago, and I feel badly for the group in Woodstock. I don't know if any of the club members look in here at all, but I wish them well in their search. Here's the announcement copied over from their blog:

For my layout this week, I chipped away at weathering and patching this 86 foot boxcar over the course of a few days.  The only real modifications I've done to it was to replace the coupler boxes with Details West  #1024, which are a whole lot better looking and better functioning than the stock Athearn part.  I also epoxied a couple of 1/2" steel nuts to the frame to add lots of extra weight. 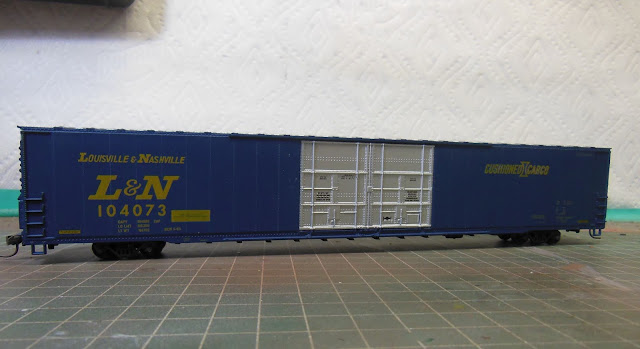 The Athearn car as it appeared out of the box. This is the only one of these cars that I've ever run across in the L&N paint scheme. 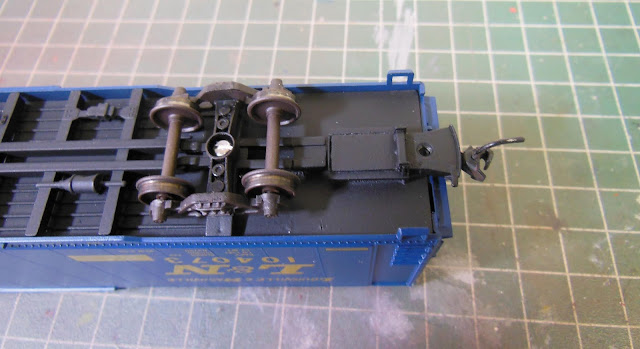 Here's a view of the Details West replacement coupler box.  I painted it as well as  and the underframe of the boxcar flat black. 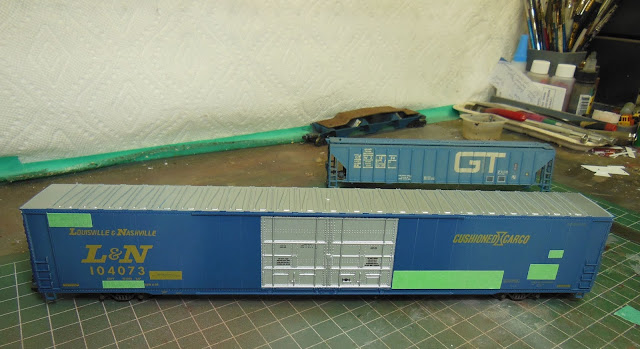 Here's a view of my boxcar with tape still in place over the original colour. You can see I've applied my paint fade already.  Once removed, the taped areas should appear as newer paint patches. I sprayed less of the fade colour in the areas beneath the door tracks.That GTW covered hopper in the background had it's paint faded during the same session.
The following photos will show how this 86 footer is looking on the rails at the moment, although there's still just a little bit more that I plan to do with it.  I think I'd like to darken the patches some more, and a few scrapes around the door area.  The rust streaking has turned out well though... 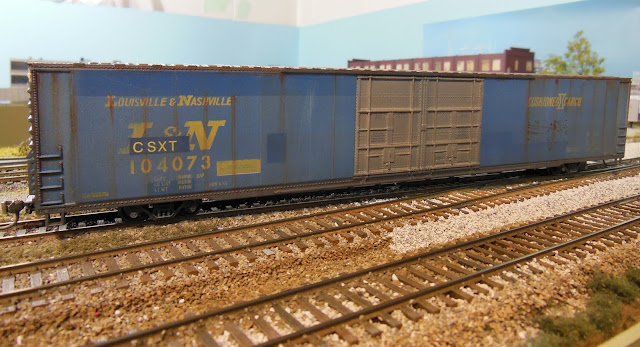 CSX at some point took over the L&N, so I thought it woudn't be a stretch to patch the boxcar to CSXT.  Here's a good look at the CSXT patch, which I sprayed ModelFlex B&O Royal Blue.  I used MicroScale's set 87-1301 for 60 and 86 foot boxcars for the yellow lettering. 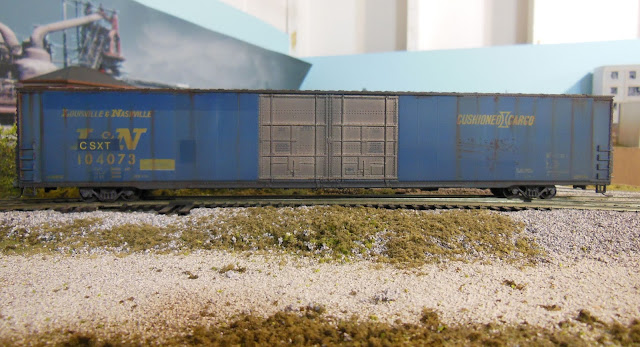 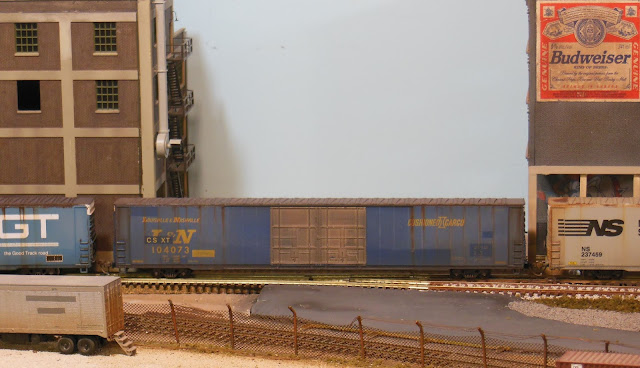 I wonder if Budweiser appreciates the free advertising...
Posted by Jimmer at 08:14 3 comments:
Email ThisBlogThis!Share to TwitterShare to FacebookShare to Pinterest

Storage Trailer(s), Plus a CN Boxcar

With the GTW line in the background, here's that SceneMaster storage trailer from last week, now in place up against the fence at the scrap recycler. 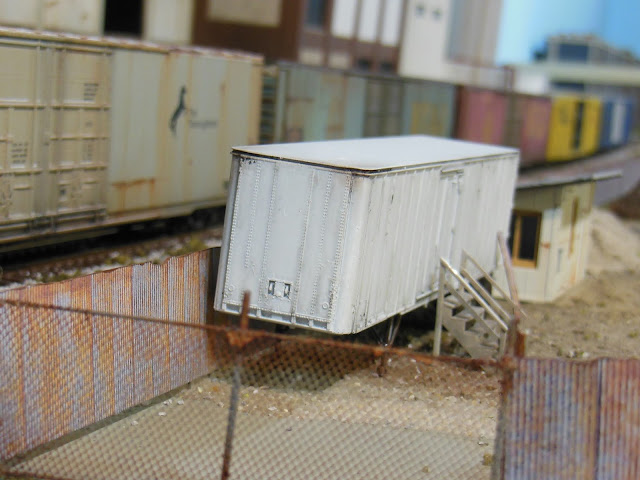 The trailer has a bit of a lean to it, like maybe the ground is a bit higher on one side. 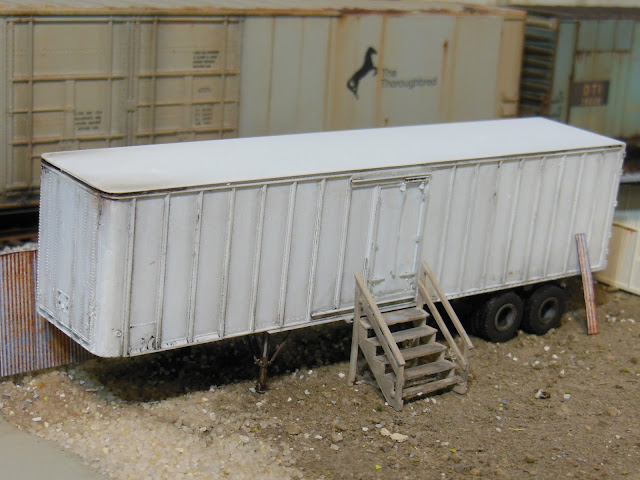 Looking at it now, I think maybe I should have rusted the channel pieces at the top and bottom of the side door as those would probably be made of steel. 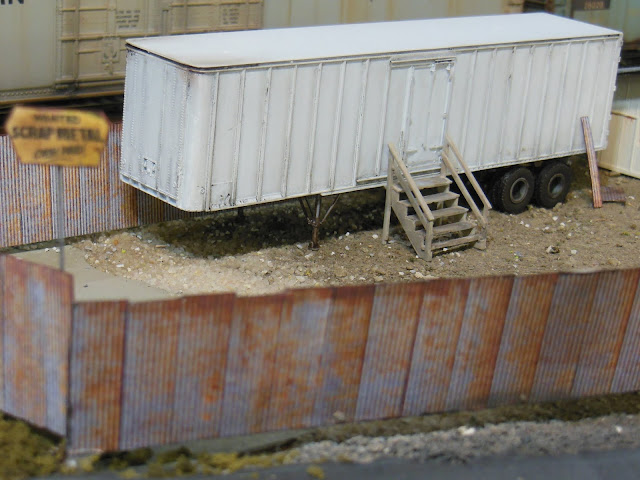 And just across the road from the metals recycler, sits another storage trailer.  I'd made this one some years ago from a Fruit Growers Express trailer and a few steps from my spare parts box. 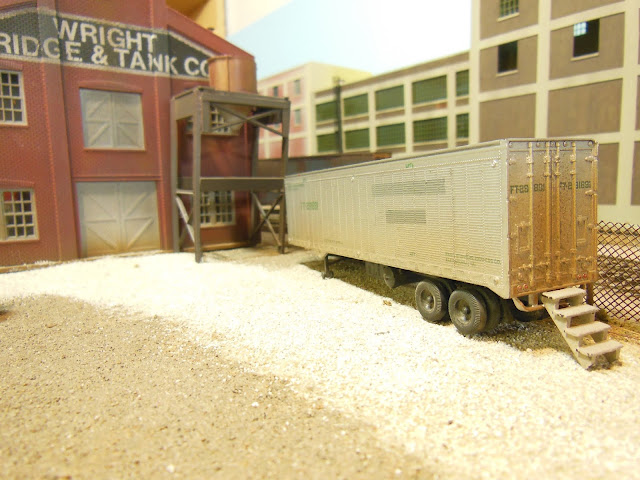 This CN boxcar is temporarily dropped temporarily until a spot opens up at a nearby warehouse. 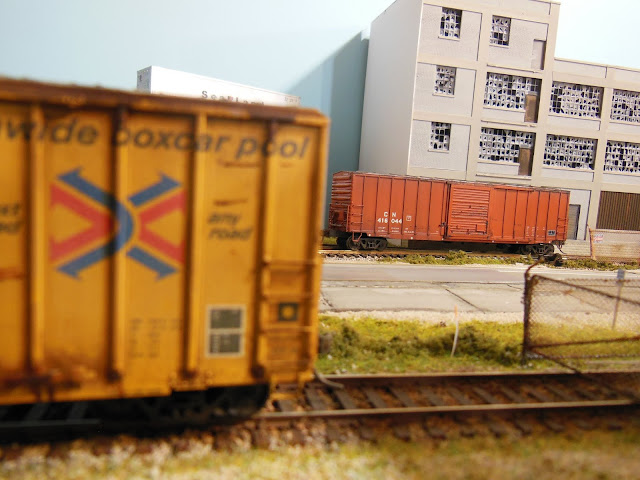 Actually, this 50 foot boxcar belongs to Jamie Barron, and is just here for some weathering.  A dark wash down the ribs, some rusty scratches, and a light spray of weathered black (which is really a grey colour) along the top and bottom sills.  The roof is rusted too, but the photo didn't turn out well enough to include here.  Maybe I can get another one and add it later. 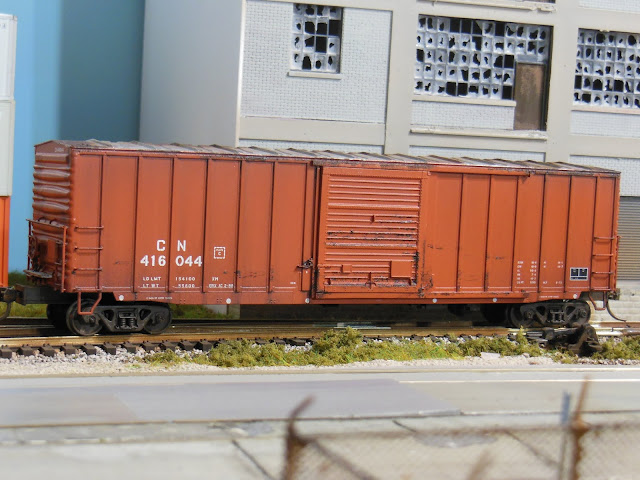 Posted by Jimmer at 08:37 3 comments:
Email ThisBlogThis!Share to TwitterShare to FacebookShare to Pinterest

First up this week, this will be the blog's header photo for August.  There very often are trailers, temporarily dropped along the gravel shoulder of the road at this location.  Can't park 'em on the other side of the street. 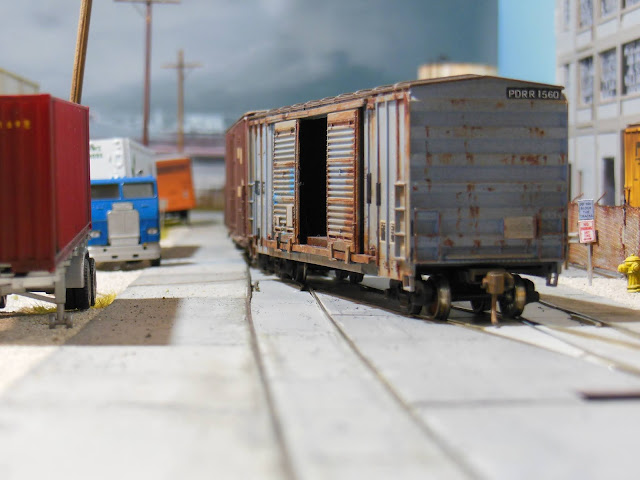 I painted and assembled a Storage Trailer kit made by Scene Master. Kind of a fun kit to put together, even though it was missing 2 or 3 minor parts from the package. There were also extra parts on some of the sprues, such as extra landing gear and a rear bumper, so maybe that's supposed to somehow make up for the parts missing. Following the instructions, many of the kit parts are simply press fitted together.
It's not on the layout yet, but I do have a place picked out for it's location. Have a look at the kit... 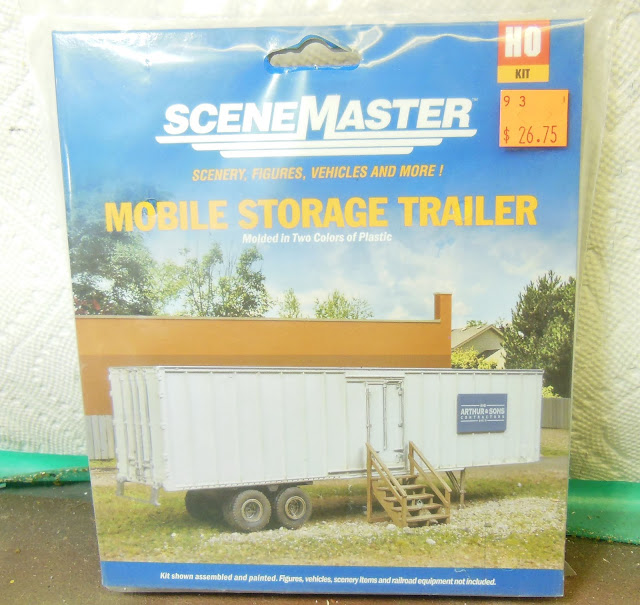 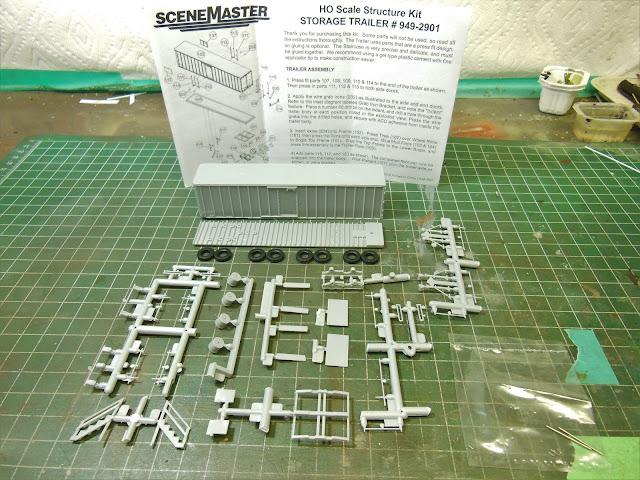 Overview of the kit parts. 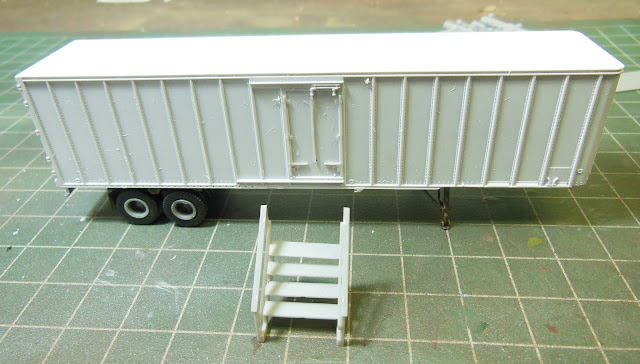 It was molded in grey plastic, but I painted the trailer Flat White, and the landing gear are painted dark rusty brown.  The tires got a light coat of brown as well just to take the shine off of them. 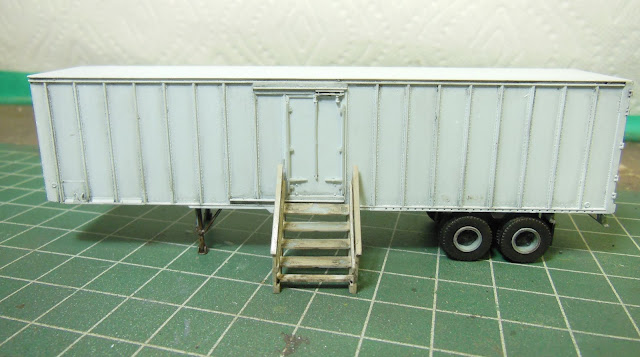 The stairs are painted "Barn Wood" craft paint and then a dark wash over top of that. 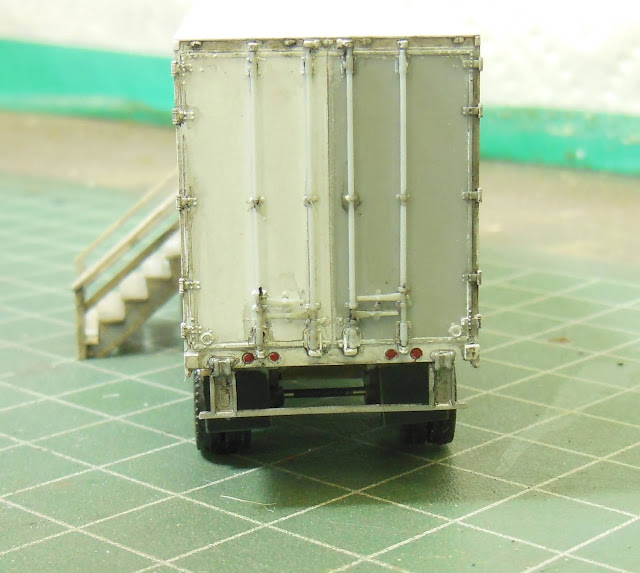 To try to simulate a replacement door on the rear of the trailer, I masked off just one door when I painted the trailer white. A dab of red craft paint for the brake light lenses. 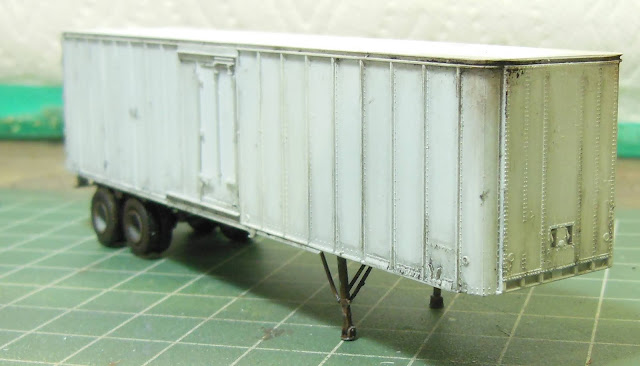 I chose to leave off the placards from the sides of the trailer, at least for now.  I guess I'll just store them and the other spare parts inside in case I need them later, making this a true storage trailer.
For a fitting weathered look, I've highlighted each of the ribs and the seams with a thin wash of ivory black. To simulate exhaust soot I added a bit of black weathering powder to the front corner areas at the top of the trailer.
I have to do some "site preparation" first, but I'll try to have the storage trailer in place on the layout for next time.
Posted by Jimmer at 07:32 4 comments:
Email ThisBlogThis!Share to TwitterShare to FacebookShare to Pinterest
Newer Posts Older Posts Home
Subscribe to: Posts (Atom)