I have seen a few of these TOFX boxcar prototypes, but not many.  I always thought that the two-tone grey paint made them somehow stand out from the crowd.  When I stumbled across this photo (below) online, taken by Stan Lytle, in Seattle, Washington in April 2012, I realized that maybe I had a similar car tucked away in my storage cupboard. 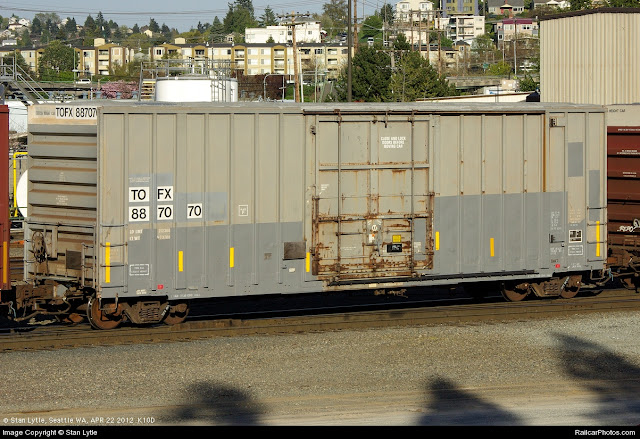 The car I had, made by LBF Company, was painted brown and lettered for CP. I very rarely ever ran this boxcar on my layout, so the decision to re-paint it was an easy one.

The project looked like it was simple enough that it could be done in 2 or 3 days. I started out by removing the Canadian Pacific lettering and reporting marks.  I decided to spray the dark grey colour first, as I thought this would make the masking go just a little bit easier.  Here's the car with the dark grey already sprayed on and masked over, and after the light grey has also been sprayed.

Finally, after decaling and dullcote, here is the completed boxcar...

The lettering and numbers are from Microscale Railroad Gothic decal set 90102, and the white is Microscale White Trim Film TF-1 cut to fit between ribs.

The "Exceeds Plate F" decal is a bit of a compromise, as the only white one I found in my decal supply had the circle shape, whereas the prototype has the square one.  Now, I have to find the courage and the time to weather my boxcar to appear more like the prototype. I kind of like it "as-is" though, so it could remain this way for quite a while.
Posted by Jimmer at 14:37 No comments:
Email ThisBlogThis!Share to TwitterShare to FacebookShare to Pinterest 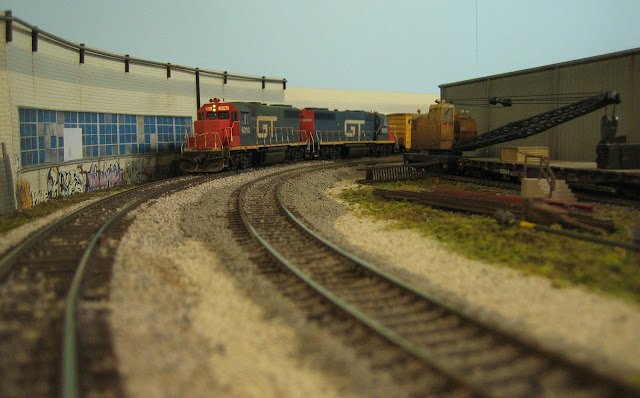 Grand Trunk GP38-2's 6210 and 6212 round the curve between a local machine shop on the left and the JSSX engine shed across the tracks to the right.  They'll be pulling about 10 cars or so around the layout and into the freight yard.  Usually about a half dozen of the cars from this train will be interchanged over to the JSSX, and the GT then picks up whatever JSSX has ready to go out.

These two engines do most of the mainline work on the layout.  They run at very nearly identical speeds, so I almost always leave them consisted. I think that they'd look really good if I could have front ditch lights added below the deck of both of them.

The 2 side-by-side yards are small, only 3 tracks each, including run-around tracks.
Posted by Jimmer at 11:08 No comments:
Email ThisBlogThis!Share to TwitterShare to FacebookShare to Pinterest

Posted by Jimmer at 07:18 No comments:
Email ThisBlogThis!Share to TwitterShare to FacebookShare to Pinterest

Back in August (2017) I was on my way to the VIA station in Sarnia to do some train watching, when I noticed that the Lamco Transportation terminal on Campbell Street had a for-sale sign on it. With no equipment or people around, it looked as if this small terminal had shut down. 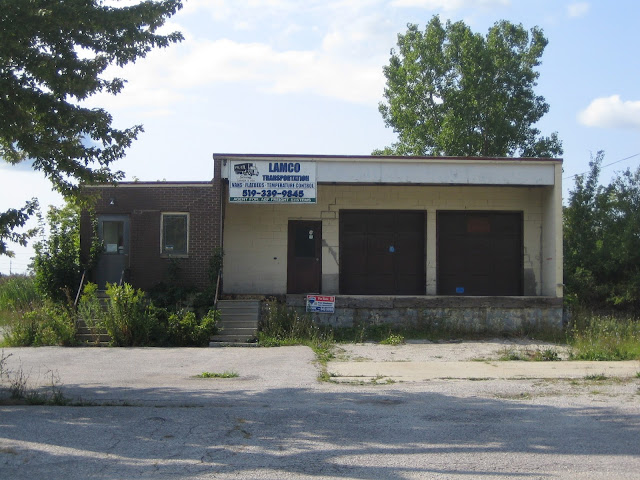 Taken on an overcast day a few weeks later, this picture shows the building in a much more even light.  Notice that the for-sale sign is gone, and the weeds and overgrowth have been cut down giving us a much better view.  I think this small trucking terminal would make an excellent project for inclusion on a model railroad.  Perhaps the front side only could be used as a low-relief building along a backdrop, with or without a trailer or two in front of the doors. 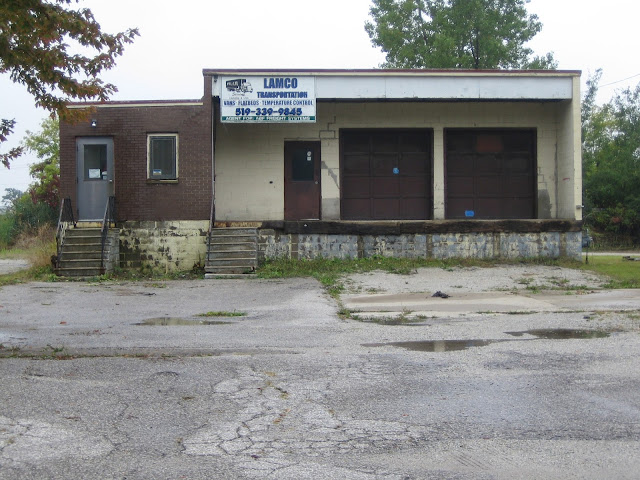 Here is the (east) elevation of the Lamco terminal. 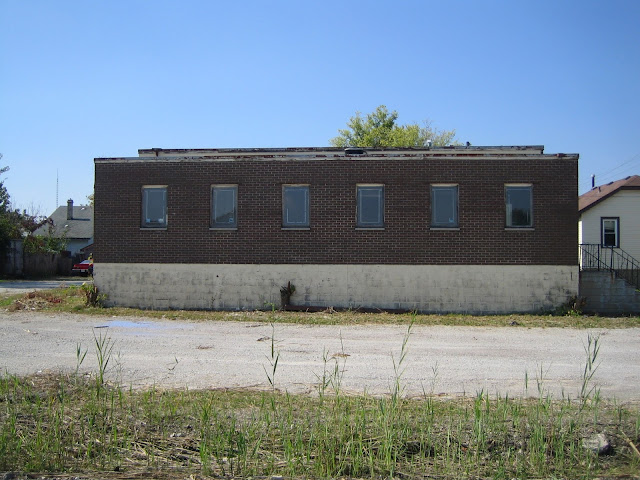 Posted by Jimmer at 19:45 No comments:
Email ThisBlogThis!Share to TwitterShare to FacebookShare to Pinterest 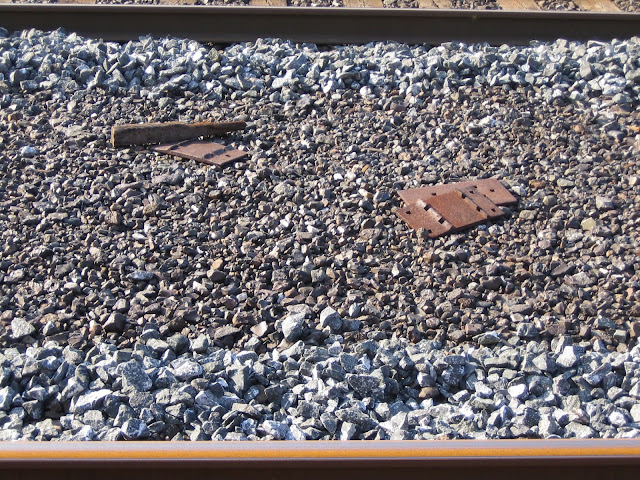 Posted by Jimmer at 13:25 No comments:
Email ThisBlogThis!Share to TwitterShare to FacebookShare to Pinterest

A couple of gondola loads of pipe have just come out of the JSSX yard and are about to be delivered to the Wright Bridge and Tank fab shop. 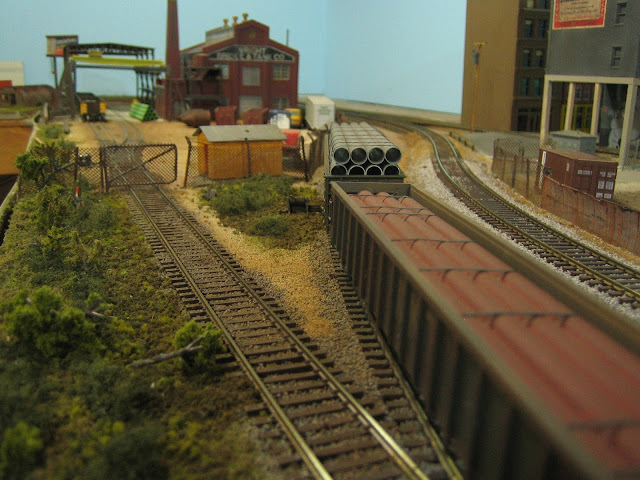 The rail access gate into the shop will have to be opened by the train crew. 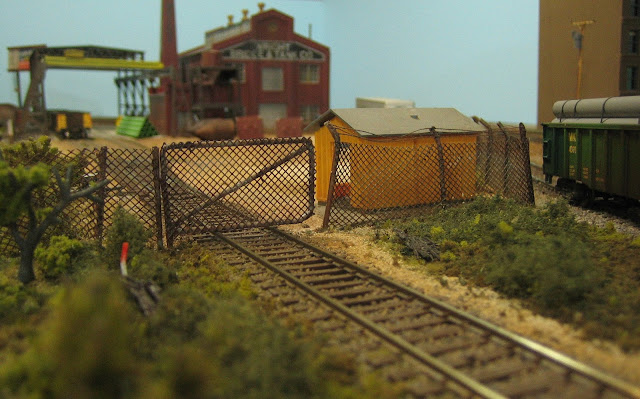 Before I started the blog last month I'd had a number of favorable comments from visitors about the chain link fence that I have in a few locations around the layout. This example is of Plastruct chain link. It serves the purpose alright, but I do think it looks a little too heavy, to the point where it's a bit over-scale. I've just purchased a package of chain link made by Walthers (kit number 933-3125).  There's 80 inches of fence in the kit. I'm looking forward to trying it out fairly soon.

The "barbed wire"  at the top of the fence (to the right of the spur) is brown sewing thread. I like the way the tiny bit of slack in the thread makes the barbed wire look as thought it's been damaged and bent.

I think that little yellow shed needs some weathering.  I'll put that on the "to do" list.

Posted by Jimmer at 11:51 No comments:
Email ThisBlogThis!Share to TwitterShare to FacebookShare to Pinterest
Newer Posts Older Posts Home
Subscribe to: Posts (Atom)