To start off this week's post, this is just the sort of covered hopper that I'd like to see occasionally spotted at the loading conveyor site on the JSSX.  I particularly like how the graffiti blends into the rust so well that it takes a moment or two before you even notice that it's there. Brian Smith took the photo at the St.Thomas yard and sent it to me, along with the caption below the photo... 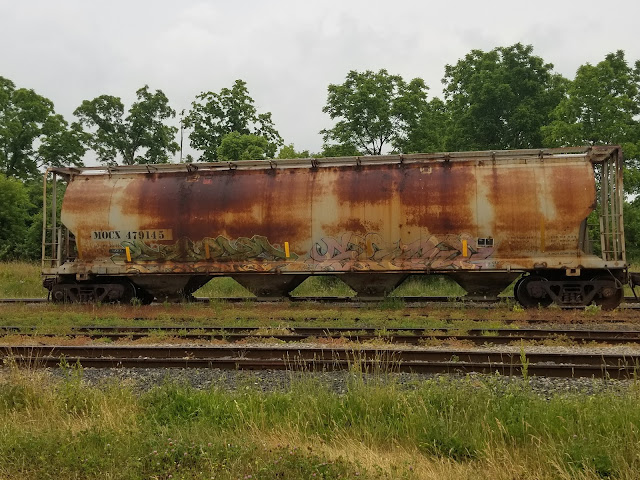 "This lonely worn out old soldier was sitting all by itself in the yard" - Brian Smith.
Thanks Brian.

Last week, Ken Rutherford asked in the comments section about the fall-prevention cable that runs above the covered hoppers on the conveyor loader spur.  I'm grateful that Ken is a regular reader of my blog, and I replied that I was going to try to incorporate that cable into the scene.  I have been intending to do so, but it really mightn't look quite like the one at the prototype site.

Because of space restrictions, I've decided my best approach to this will be to cantilever the beams off of the boarded up warehouse that's on the far side of the spur.  The warehouse serves the dual purpose of blocking the view of the end wall, as well as the view of the bare trackwork that is the 180 degree turn at the end of the layout.

This foreground in this view will become the location of the loading conveyor "industry", but I don't want to have the supports for the safety cable to be located in between the aisle and the freight cars 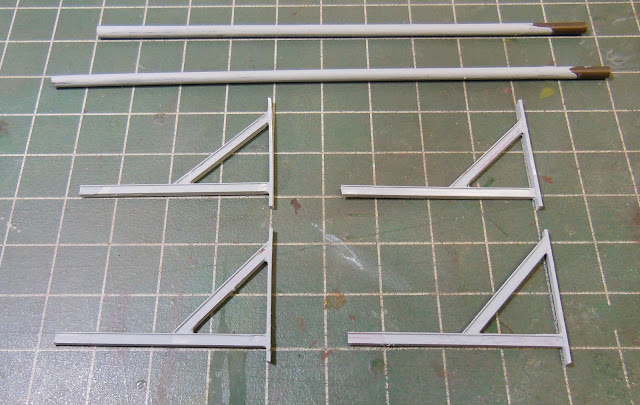 I've made up 4 cantilever beams from styrene I-beam, plus two poles (plastic stir straws) to go at the ends of the cable, although I ended up only using one of those. 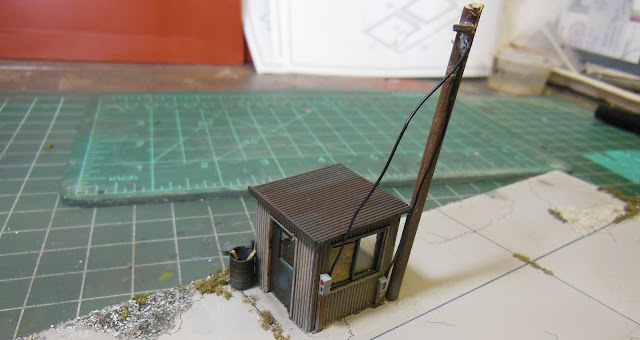 This small shanty will sit on the concrete pad to provide shelter from the elements for a couple of workers. A boarded up window, incoming electrical cable and pole, and trash barrel detail the area.

With everything set in place now on the layout, here's a look as NREX 3885 shoves the first couple of covered hoppers into position at the new industry on the JSSX.  The safety cable and supports can be seen across front of the warehouse. 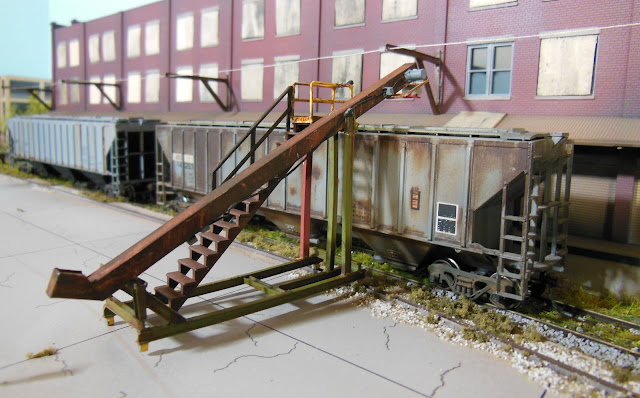 A closer view with the covered hoppers on the rails.  Two cars is about the maximum here, three might be a bit of a stretch. 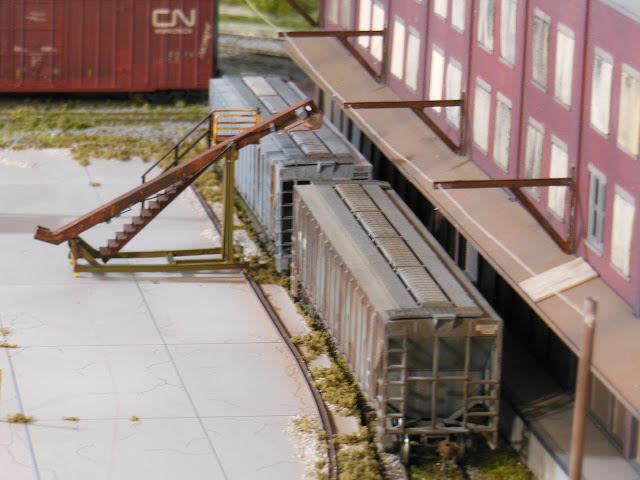 Beige coloured thread will do for now as the safety cable running above the cars. 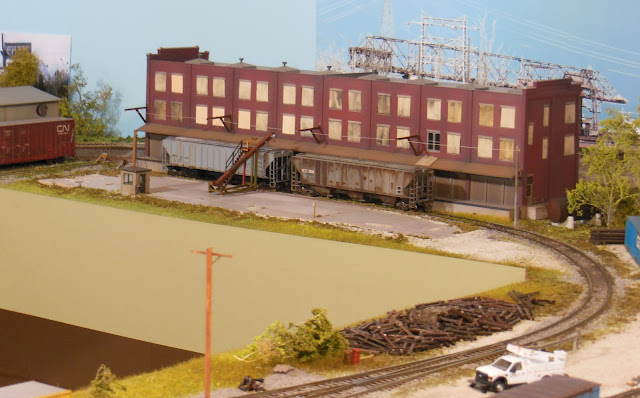 A look at the site from near the entrance to the train room.  The track leading into the industry site is the seldom used pull-back at one end of the JSSX freight yard.  Before I decided to add this car loading conveyor industry, this track had most often sat empty, or occasionally used to store a short track maintenance train.  If I ever find an over-the-road hopper type of truck and trailer to park on the concrete pad, it would make for a real good addition to this scene.
Posted by Jimmer at 07:44 8 comments:
Email ThisBlogThis!Share to TwitterShare to FacebookShare to Pinterest

This 50 foot Detroit & Mackinac boxcar, made by Athearn, spent time on the bench recently undergoing patching and a light weathering process. 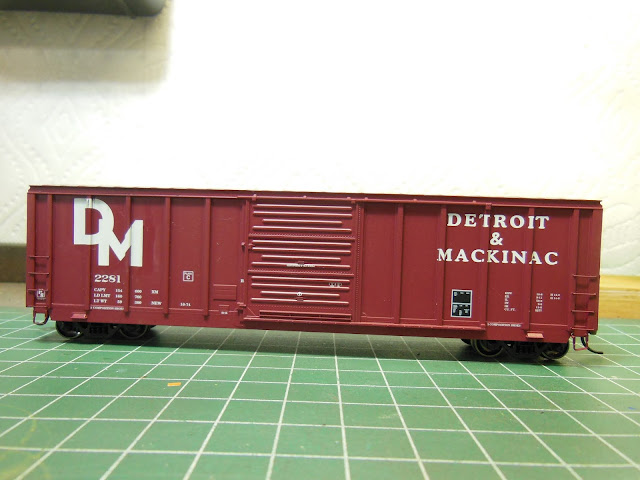 I decided that I'd patch over the giant DM logo/reporting mark on the left, but wanted to first remove it from the side of the boxcar.  The Detroit & Mackinac graphic on the right-hand side is going to remain.  To remove the logo took about 25 minutes.  I first brushed MicroSol over the area, and then covered it over with a single "ply" of paper towel, and kept it wet by adding  a drop or two more of the MicroSol.  After about 20 minutes, I lightly scrubbed the white logo with a wet Q-Tip and it pretty much peeled right off. 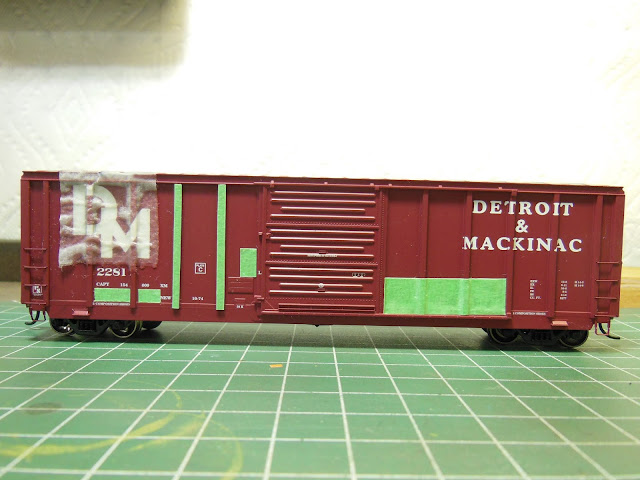 The fading of the original paint was done by spraying it with ModelFlex Concrete Gray. Flat black was used to cover the area where the large logo had been, and one door has been primer to compensate for transgressions by forklift operators.  Earlier paint patches on either side of the door.

I've checked the list of reporting marks on rrpicturearcjives.net, and going by the reporting marks listed on that site, the LLSR reporting marks that I used on this boxcar are fictional.  Here's the (slightly embellished) story behind their use on this freight car...
While I was in the train room one evening, my adoring wife (that's right, I'm adorable) wandered into the train room, and after looking around for a few moments, she asked me how come I'd never painted a freight car for her (and that's when the fight started).
So, to make a long story short, the LLS part of the reporting marks on this boxcar are her initials. I used the "R" letter because there were no "X's" left on the decal sheet. I believe this to be the first (and maybe the last) LLSR boxcar anywhere. 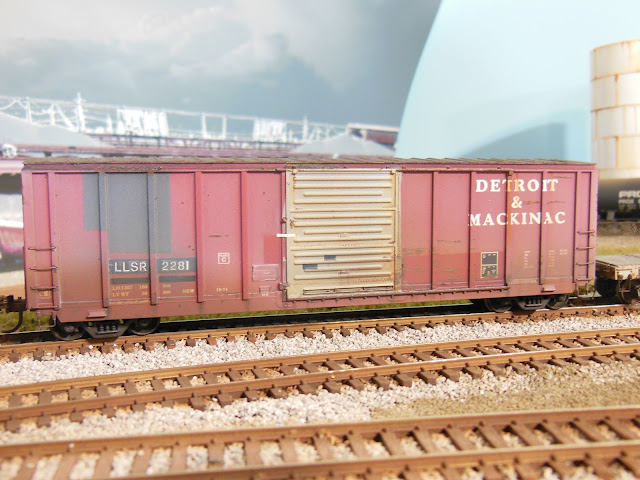 LLSR 2281 all finished up and rolling along on the JSSX.
And here's a couple of views of the covered hopper loading conveyor that I've been working away at for the last little while.  I've got it positioned the layout now, still just test fitting the scene. 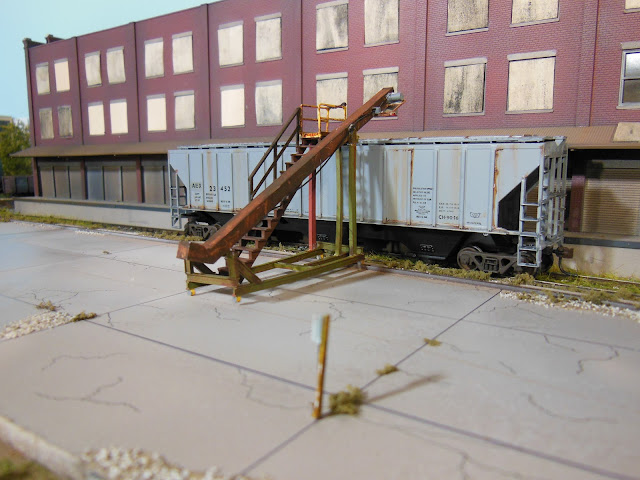 A piece of MDF is cut to fit into the space available, and then painted as concrete slabs. 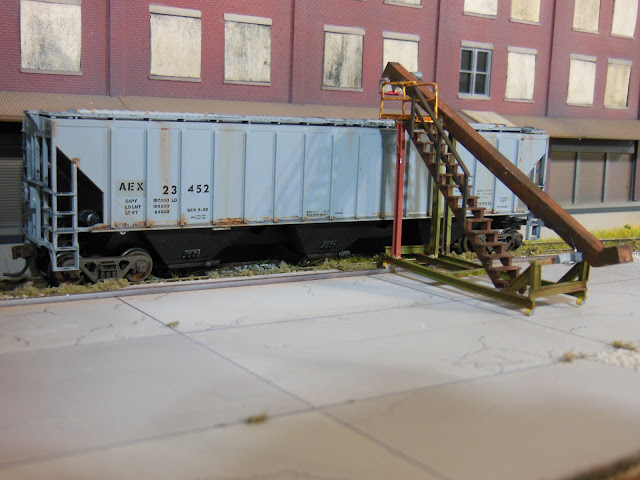 I still have scenery to put in to blend the scene together with the existing track spur.  This "industry" will be able to accept one or maybe two covered hoppers at a time.
Posted by Jimmer at 08:45 3 comments:
Email ThisBlogThis!Share to TwitterShare to FacebookShare to Pinterest

Before I get to the progress on the conveyor, I was pretty happy on Monday to have been invited to meet up with George Dutka, creator of the White River Division blog, and Don Janes down at the Sarnia train station.  Not much was going on down there trainwise at the time, but it sure was great to see and hang out with the two of them for a while.  We did our best to maintain that 6 foot separation.

One manifest train did head westbound through the tunnel while we were there, and another got close to us as it was doubling over into the freight yard.

Here's a few photos from our time at the station: 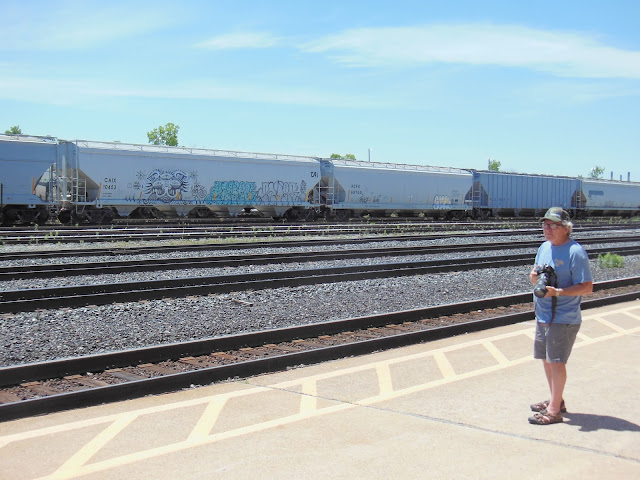 Don is getting ready to photograph CN's SD70 5712 as it approaches.  I don;t know how or why I didn't get a picture of George.  He posted a few other photos on his blog on Tuesday.  Here's the link to that post:http://whiteriverdivision.blogspot.com/2020/06/visit-to-sarnia-mini-rpm-meet.html 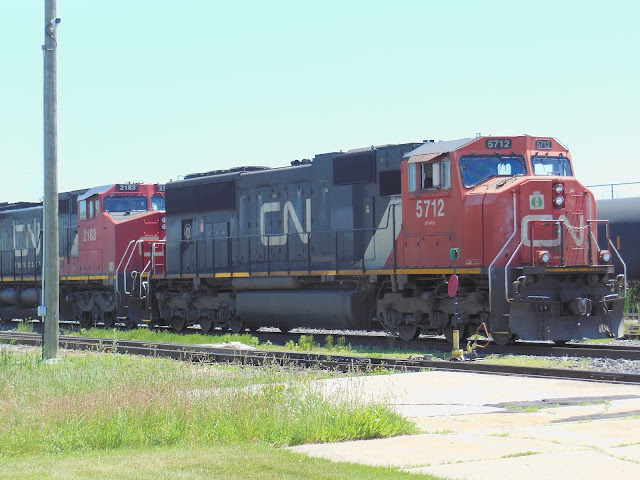 5712 has pulled up as far as the station platform as it doubles it's train back into "A" yard. 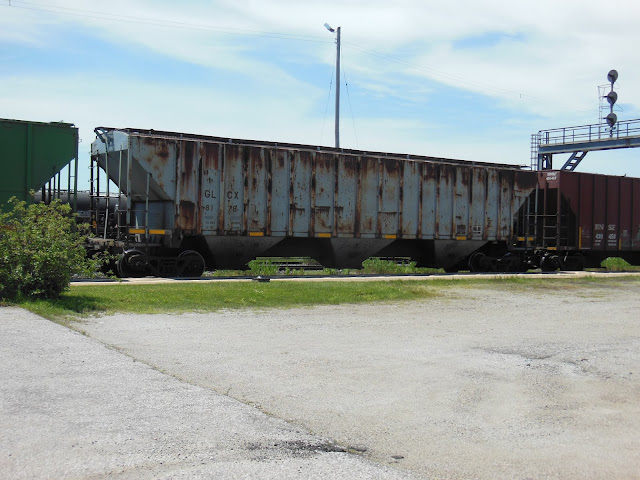 I liked this well-weathered covered hopper that rolled past us. 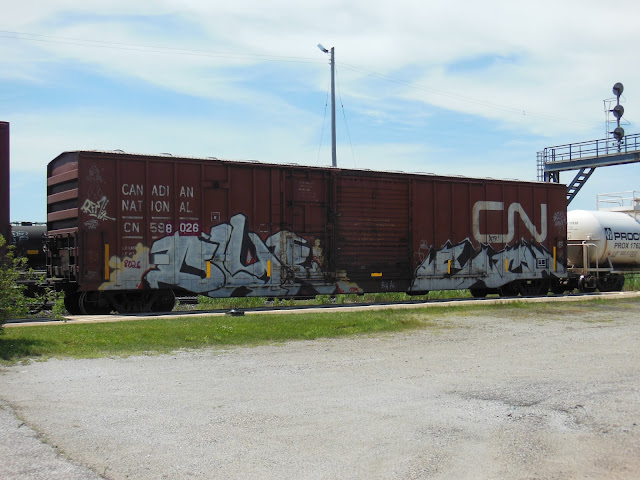 ExactRail makes a very nice model of this type of combination-door boxcar.  I looked up this exact car number on rrpicturearchives.net, where it is noted that this boxcar was built in Trenton Nova Scotia in 1993.

Now, on to the conveyor...I didn't get as far along on my conveyor machine I featured last week as I had intended, but at least a little bit more has been accomplished.  Here it is mocked up on the workbench. 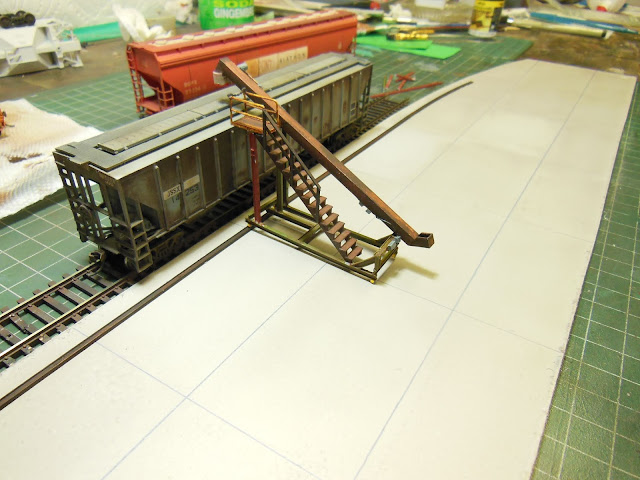 I've cut a base of MDF to shape to fit the spot that this little "industry" is going to be placed on the layout. The base is painted grey and then concrete gray sprayed sprayed over that.  I've marked out sections on it to represent separate concrete slabs, and then painted and glued down a styrene channel for the conveyor "wheels" to track in. 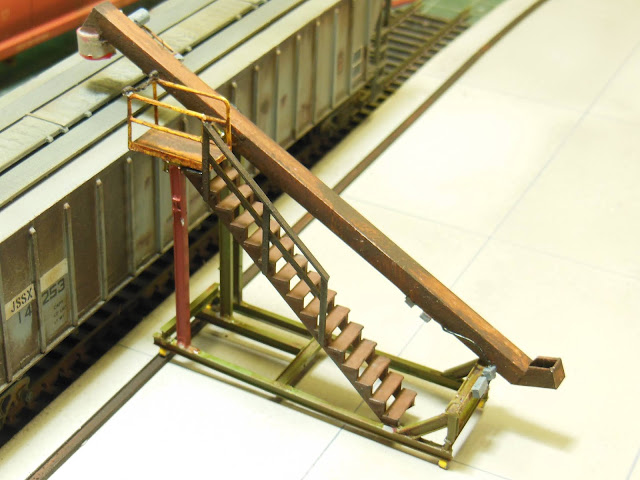 This closer view allows the small grey electrical boxes I've added to be seen a bit more clearly. I think I'll leave the one support column in primer, just to add a little bit of interest. 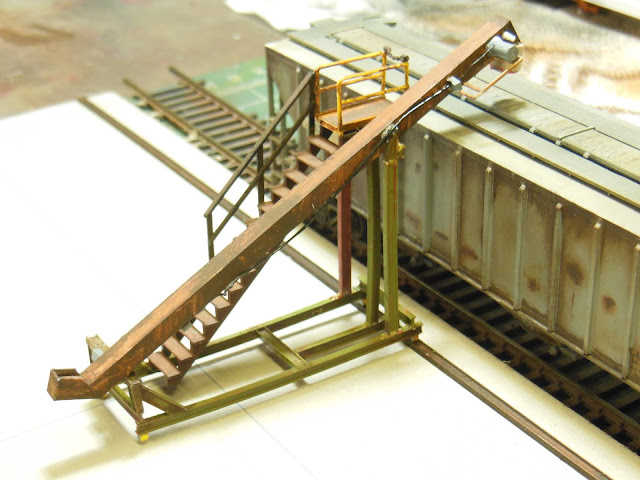 From the other side, we can see the electrical cable, boxes, and the belt motor at the top of the conveyor.  I'll also be trying to make up another drive motor (with a safety guard) to place on the bottom frame.
That rusty covered hopper in the photos above is one of a few that I patched and re-lettered for the JSSX a few years ago.  I had stopped running them on the layout, as there was really no industrial destination into which they could be spotted.  I've even sold off 3 or 4 JSSX lettered covered hoppers for that reason.  This conveyor will allow me to a): add another small industry to the JSSX, and b): run a couple of my remaining JSSX covered hoppers.
Here's a somewhat better look at JSSX 14253: 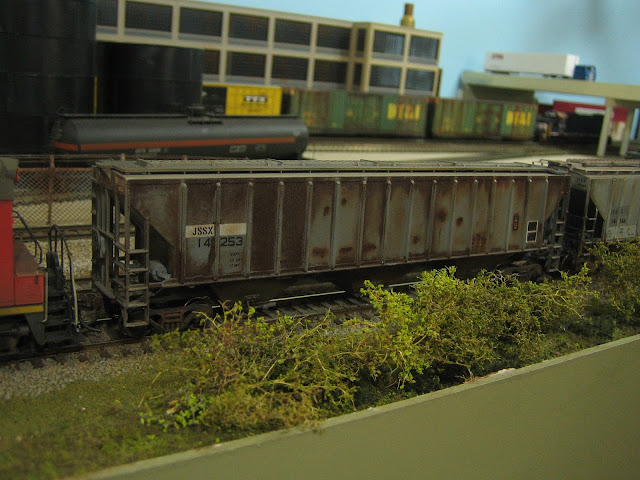 Posted by Jimmer at 10:38 3 comments:
Email ThisBlogThis!Share to TwitterShare to FacebookShare to Pinterest

CanDo Geeps. Plus a Movable Conveyor Along the JSSX

It's the first week of the month, and hopefully you noticed that I've put up a new photo at the top of the blog.  It's a view of a couple of 50 foot boxcars that have been spotted at the small warehouse on the JSSX.  The freight cars at this place get switched out quite often.
Sitting outside of the Lambton Diesel Specialties shop here in Sarnia is this great looking pair of freshly re-built and re-painted GP9R's for CanDo Rail Services, of Brandon, Manitoba.  These two came into the LDS Sarnia shop in CP colours late last fall. 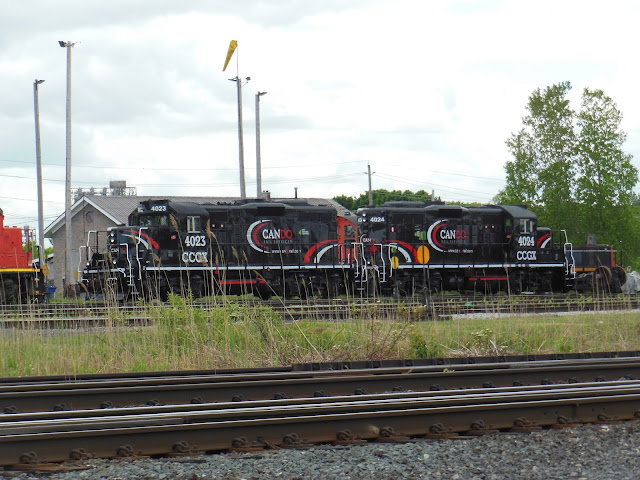 Some pretty snappy looking graphics on these, I particularly like the red stripe on the fuel tanks as it's just something a little different.  Sorry 'bout the phragmites growing in the foreground that are obstructing the view a little bit, but it's the best photo I was able to get.

And, if anyone wanted to model a Geep or two such as these, here's a link to the appropriate Switch Line Decals set: https://switchlinedecals.com/cando-gp9-decal-set/

And about a half-mile or so to the west (to the right in the above photo) of the two CanDo engines, there's a spur that at least used to see occasional covered hoppers spotted for loading with fly ash.  The material is transferred from truck to rail by use of this movable conveyor (below).  I'm not sure how they get it out of the truck and onto the conveyor. 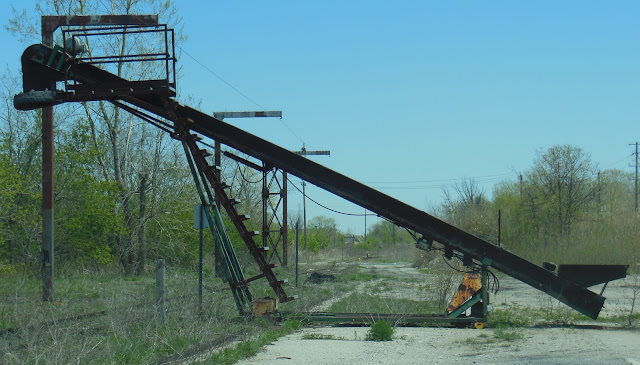 The conveyor's support frame is on small wheels, and can be moved parallel to the track and freight car in a long steel channel. With weeds and grass growing on either side of it, the channel can barely be seen near the left-hand end of the bottom frame of the conveyor.
I'm going to try to head back down to this spur to get a few pictures of the surroundings. In the meantime though, here's a couple of more shots of the conveyor. 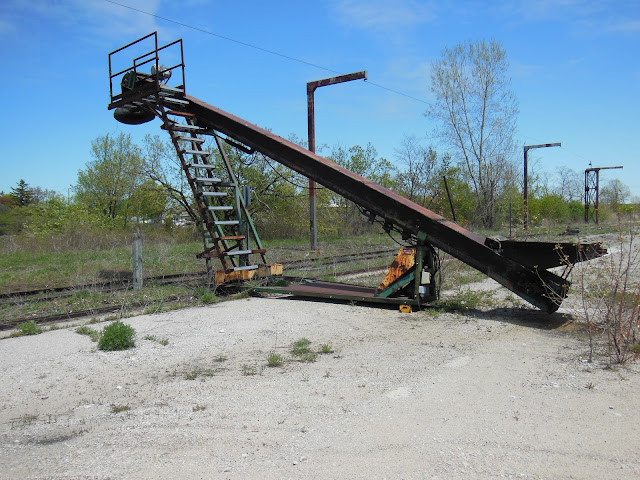 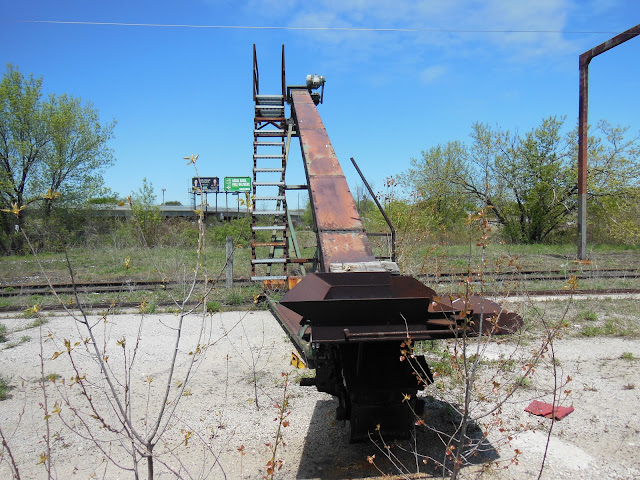 I've thought of a spot on the JSSX that I could maybe model a smaller, but similar operation, so started looking around on the interwebs for conveyors that might pass for this sort of thing.  To make a long story short(er), I decided to take a crack at making/scratching one myself with whatever I might be able to find within arm's reach of the workbench.
Incomplete so far, and unpainted as well, this is what I've come up with.  Hopefully I'll have more on this next time. 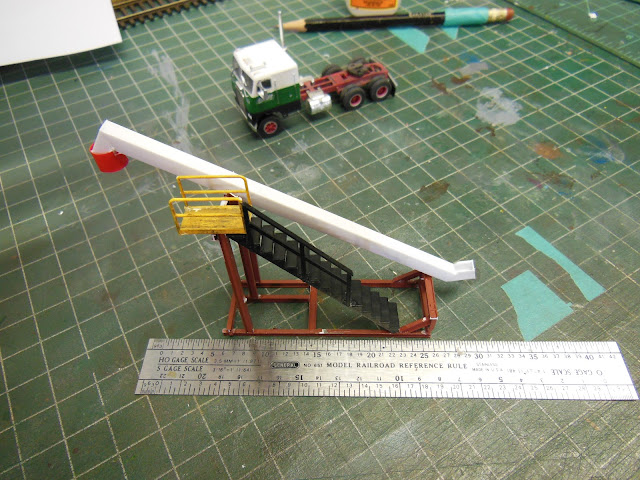 I had brought the cab-over in the picture in for maintenance, as the driver (well, me really) had somehow managed to knock off one of the side-view mirrors.
Posted by Jimmer at 07:34 1 comment:
Email ThisBlogThis!Share to TwitterShare to FacebookShare to Pinterest
Newer Posts Older Posts Home
Subscribe to: Posts (Atom)