I was hoping that I'd receive the decal trim film this week that I had ordered from Microscale a full month ago now, but no luck.  I want to use it to make up the white striping on the sill of the GP38.  Those sill stripes, painting the handrails, and a finishing spray of dull cote are about all that's left to do on that engine now.  Well, I don't seem to have any antenna in stock here for the roof either, so I'll have to try to order in some of those as well.

I've been a member at trainorders.com for quite a few years, and this week I posted a few photos of my NREX lease engine GP38 as it rolled onto the South Industrial Blvd. section of the layout.  I thought I'd show those photos and maybe a couple more here as well. 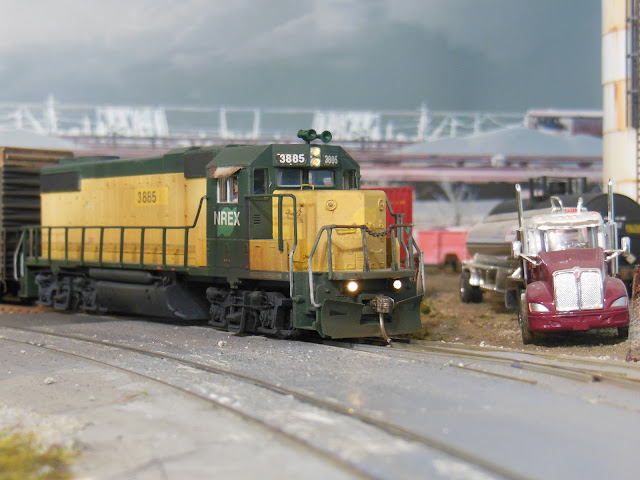 Up close shot of the GP as it rolls onto the street trackage.  The Tri-Mac tanker wisely chose to wait inside the gate rather than try to beat the train.
Here's a look at the prototype engine, photo taken by Alan Gaines. 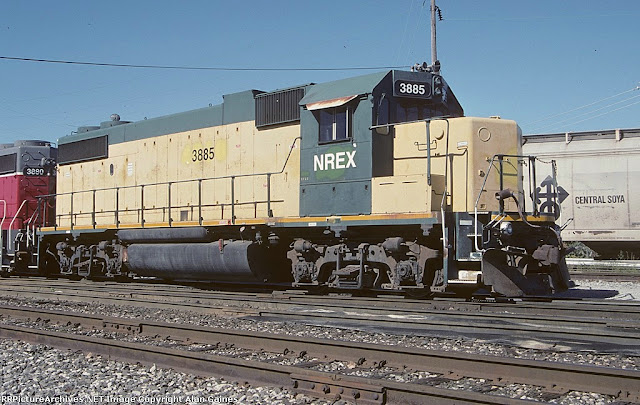 This was the photo that inspired me to model the engine 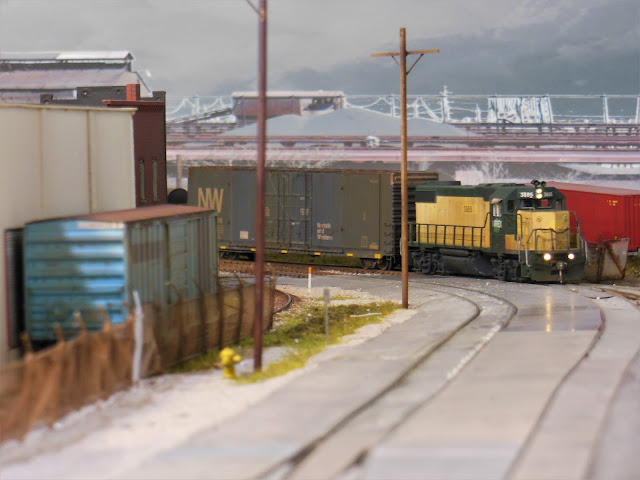 A longer-range view from a bit further down the street. 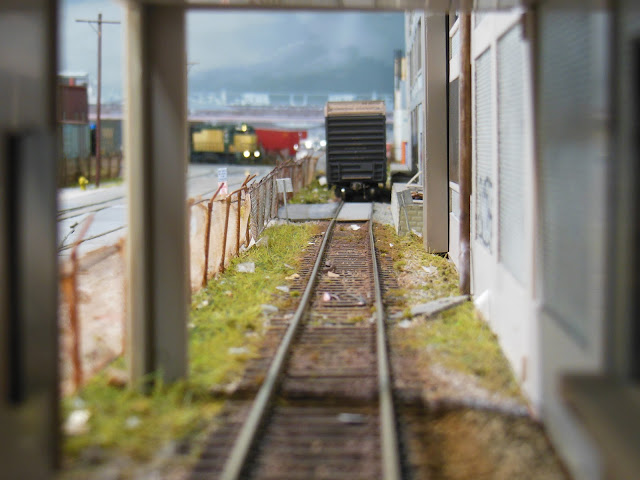 This is a look down the spur of one of the industries that the 3885 will switch out. The leaser engine can be seen in the distance.  Forgive the poor depth of field in the photo. 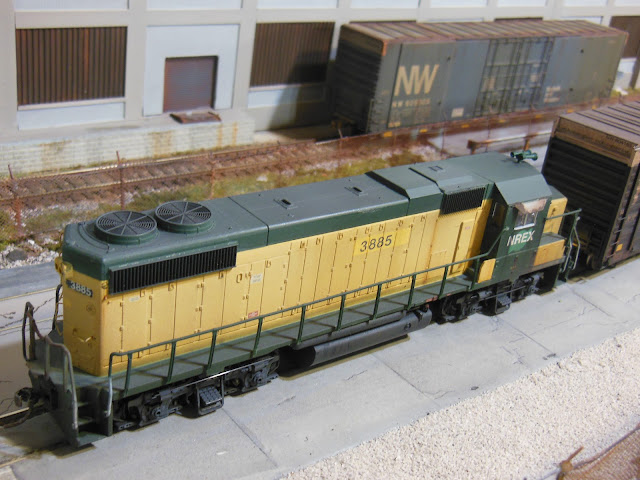 Something of a drone view of the engine after it's performed the runaround move to couple on to the opposite end of the train.  The smooth sided NW boxcar will be switched out for a waffle sided car of the same size. 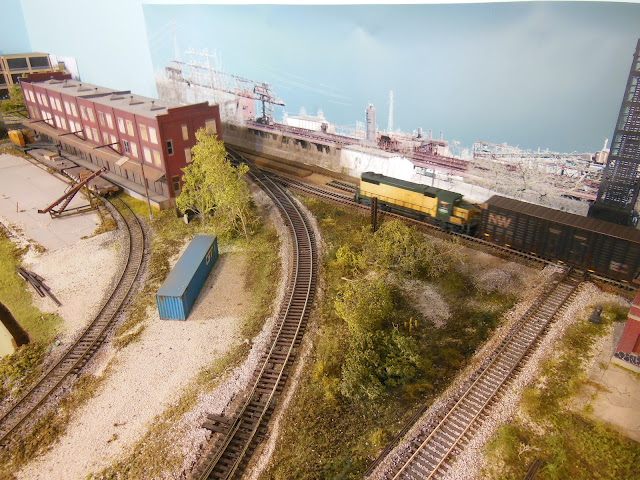 In this higher up view, the 19 degree diamond crossing of the JSSX and the GTW can be seen.  The diamond allows my GTW to run as a continuous loop, while the JSSX is point-to-point. I've kept the crossing somewhat hidden behind the closed and boarded up REA building. That track in the centre of the picture needs to have the ballasting finished up after I replaced the section quite some time ago.  It's kind of one of those projects that should be done, but I've just never gotten around to fully completing.

Attached below is a link to a really well done video of a terrific looking layout called the Tenino Western Railroad, set in the pacific northwest.  Great scenery, great structures. 13 minutes long.

Posted by Jimmer at 07:11 2 comments:
Email ThisBlogThis!Share to TwitterShare to FacebookShare to Pinterest

Work continued, albeit slowly, this week on the JSSX's new GP38. Below is a view of some of the detail parts to be applied to the GP38. 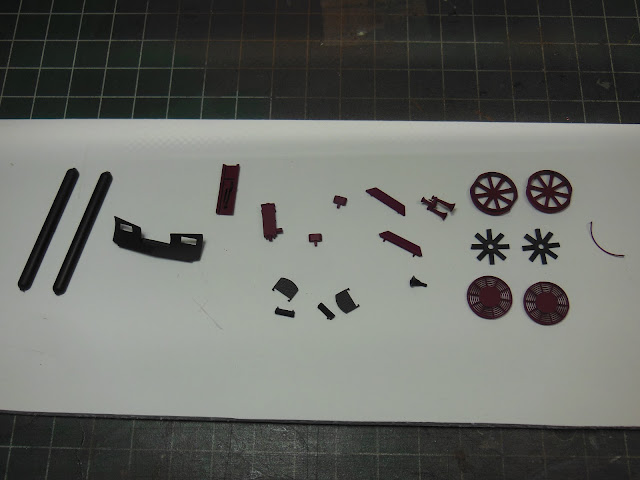 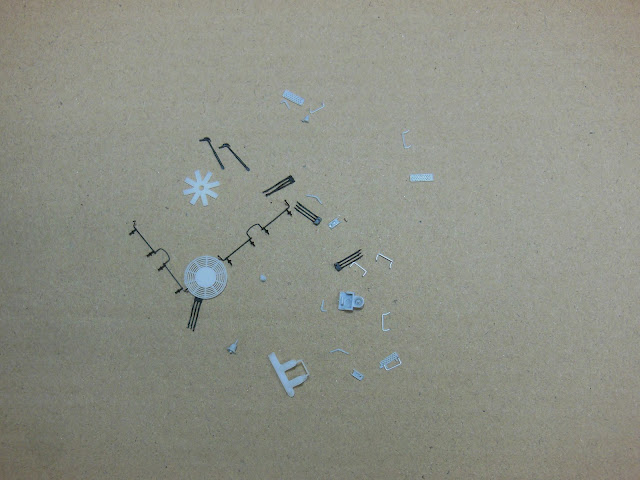 Coupler lift bars, air hoses, spare fan parts, a couple of optional bells, grab irons, and steps.
Anyway, the engine is coming together fairly well now, as the painting is pretty much done, except for  a few of the parts and clear coats. 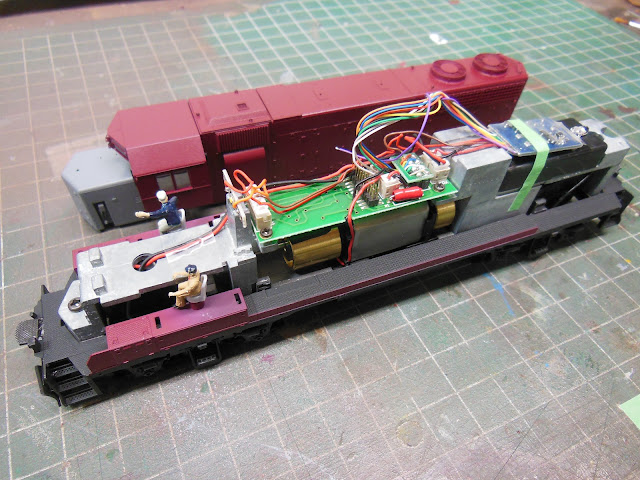 A simple plug in of the ECU 4-function decoder to the Atlas circuit board
Pictured below is the new locomotive, with it's unkempt brother lurking in the background. I'm thinking of trying to locate the horn toward the rear of the locomotive, sort of between the 2nd exhaust stack and the 1st fan. Maybe with the air line for it running along the roof. 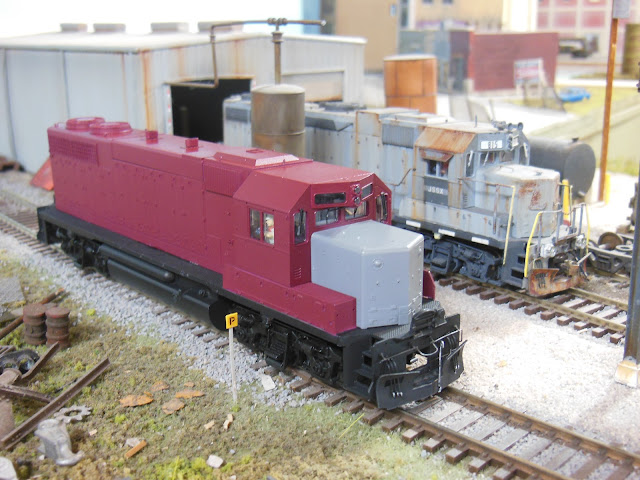 The new loco will likely be numbered "812" to go along with the JSSX's other GP38's which are numbered 813 and 815. I want to put the grey and white stripes on the sills before I put the handrails on, but the trim film I intend to use for that hasn't arrived from Microscale yet.

And now, completely unrelated to railroading, the coal fired Lambton Generating Station is about 25 miles downriver (south) of Sarnia.  Or, at least it was until around 8:am last Saturday, when what was left of it was taken down by controlled implosion. The plant was shut down in 2013 by the McGuinty / Wynne Ontario Liberals government in favor of a move to gas fired power generation.  At one time, about 900 people worked at this power plant.

Glad I wasn't downwind...that's looks like quite a lot of coal dust.

Posted by Jimmer at 07:12 4 comments:
Email ThisBlogThis!Share to TwitterShare to FacebookShare to Pinterest

GP38 in the Paint Shop

I got a good start on the painting of that new GP38 this week.  I've actually been a bit conflicted about even putting a nice looking paint job on the engine in the first place. That's because, as noted in the sidebar of the blog, part of the original concept for the JSSX is that the railway is supposed to be a bit challenged when it comes to available cash for capital expenditures. I guess the company must have had a good year.  (Yeah, that's it...we'll go with that.)

The locomotive is being painted into my JSSX "corporate colours" of Reefer Grey, Lehigh Valley Cornell Red, and Black. It's not anywhere near to being finished up, but here's a look at the progress so far. 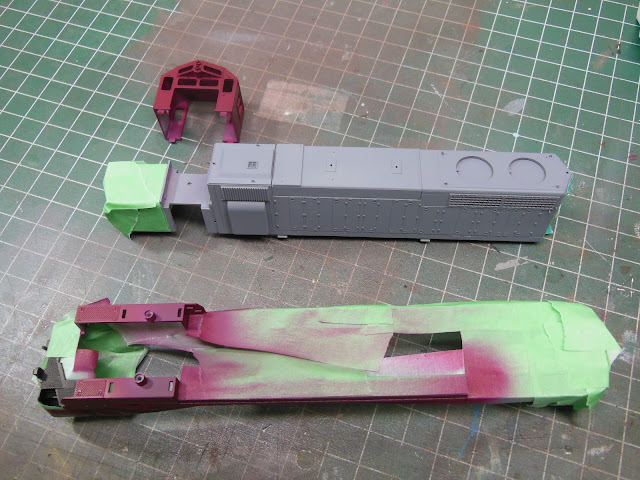 Here, we see that the cab is painted, the main shell is primered, and the frame is painted, although mostly still masked with tape. 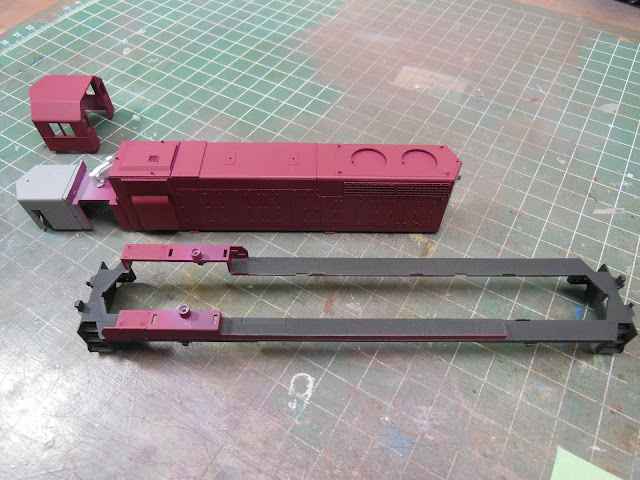 Cab, body, and frame painted, but not assembled yet. Flat Black is used for the walkways and pilots. 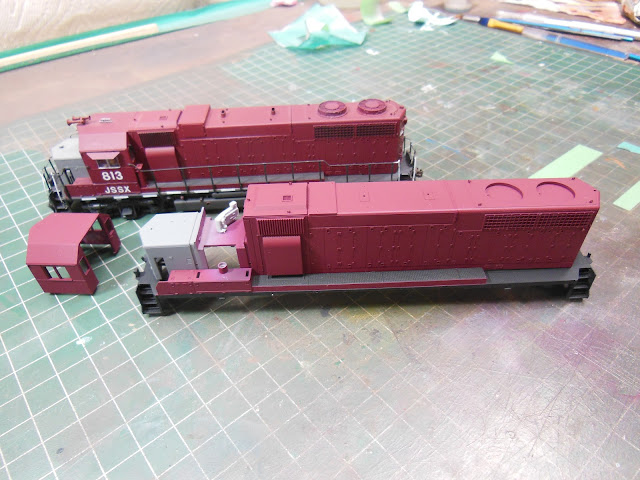 The nose is done in the Reefer Grey. 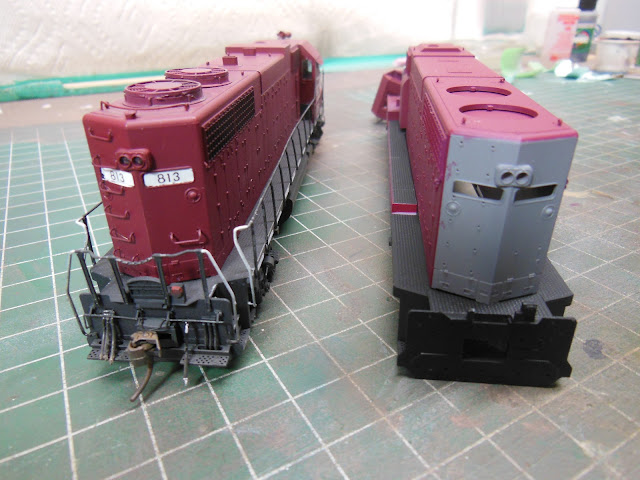 The company CEO (me) thought that maybe having the back end painted in grey, like the nose, might give kind of a sharp look to the engine. It will help to distinguish it just a little bit from the 813.  Maybe it shows that the railroad's paint scheme has evolved just a little bit over time when the two are viewed together.

I intend to try to get the detail parts painted up during the coming week.

Meanwhile, out there in the 1:1 scale world, this ordinary plastics pellet hopper was sitting across from the station here in Sarnia a couple of weeks ago.  It would blend in among the sea of covered hoppers we usually have here, but what I noticed was the reporting mark number.

Sorry 'bout the lens flare at the right-hand side...I was shooting into the sun, which (remarkably) happened to be out that day.
Thanks for looking in.  Enjoy the Super Bowl.  I'm kind of rooting for the Bengals and Joe Burrow as they represent the AFC, but I think the Rams will win the Championship. The way Stafford suffered in Detroit for so long, he does kind of deserve it.
Posted by Jimmer at 07:34 1 comment:
Email ThisBlogThis!Share to TwitterShare to FacebookShare to Pinterest

Four weeks ago, I included in my post a photo of my new undecorated GP38.  I wrote at the time that I had ordered a non-dynamic brake hatch section for the locomotive.  Happy to report that the new replacement part arrived a week ago, and dropped right into place, just as it should.

Now, maybe I can get to painting the locomotive soon. 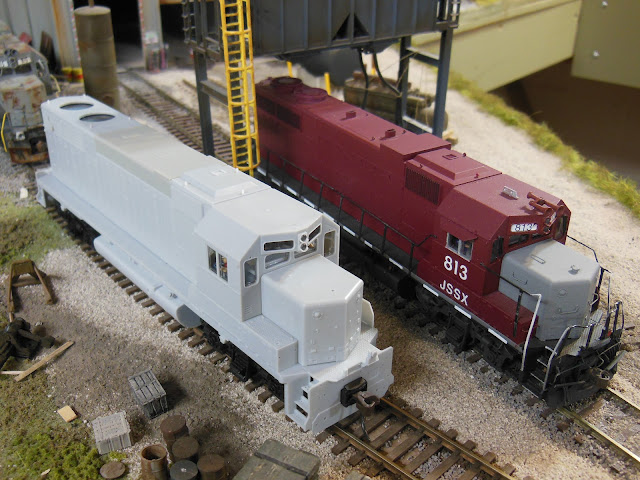 Basically the same photo as I posted a month ago, but with the non-dynamic hatch in place of the original one.
I spent most of my modeling time this week weathering a pair of CSX/SBD 3-bay covered hoppers for Jamie.  The two hoppers were identical, including having the same reporting mark numbers. I patched over and changed the numbers on one of the cars.
Here area a few views of the covered hoppers after weathering: 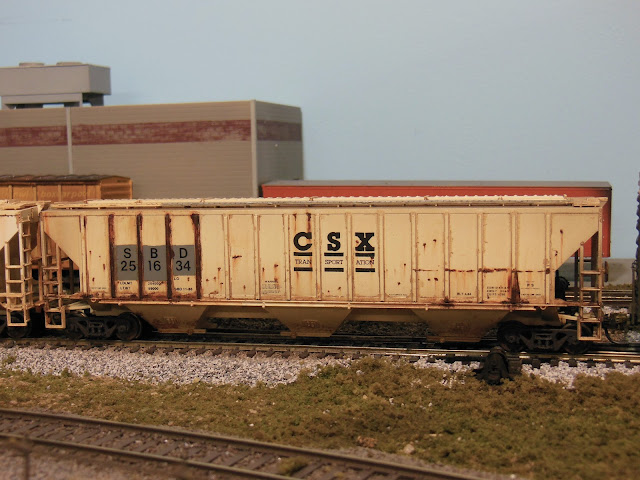 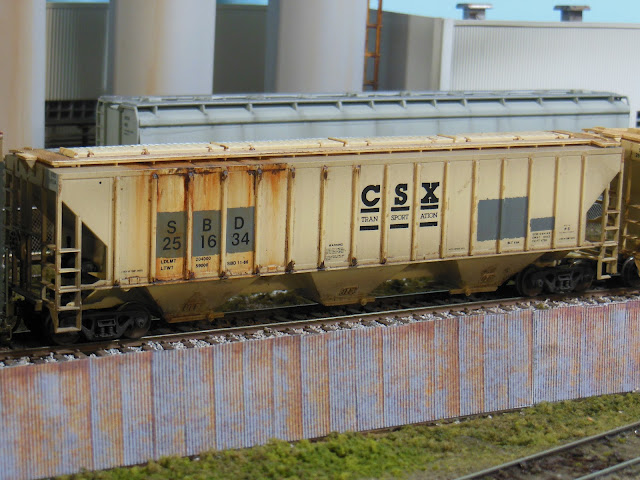 The grey patches are done with Microscale trim film cut to fit
I faded just a few panels faded on the second car with PollyScale (remember that brand?) "Dust", and then added the rust after that. 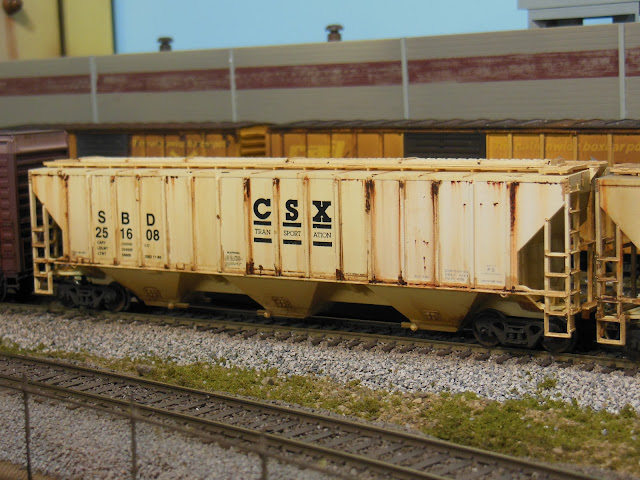 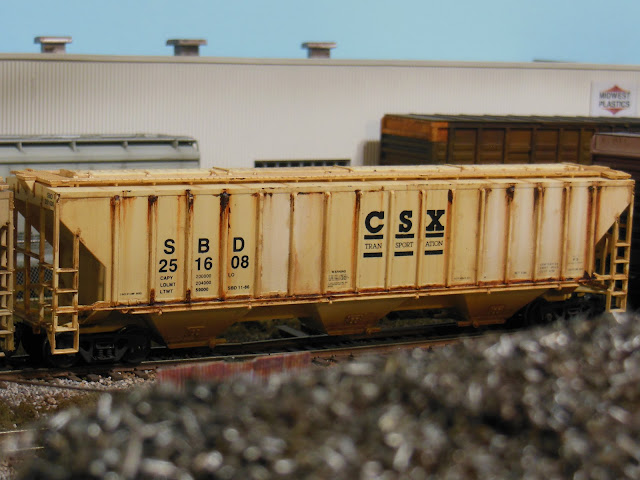 And the two covered hoppers together: 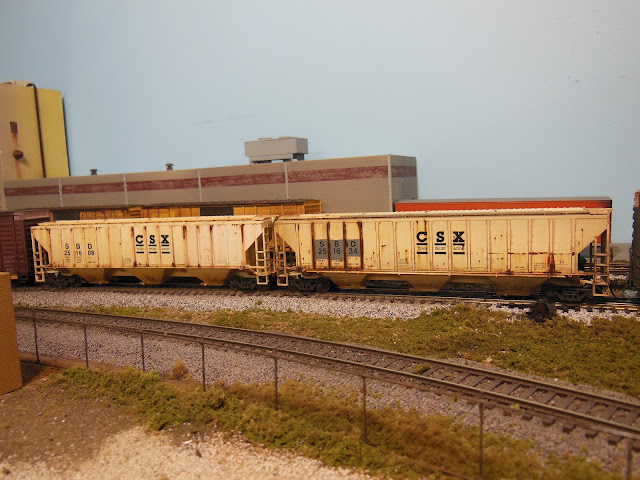 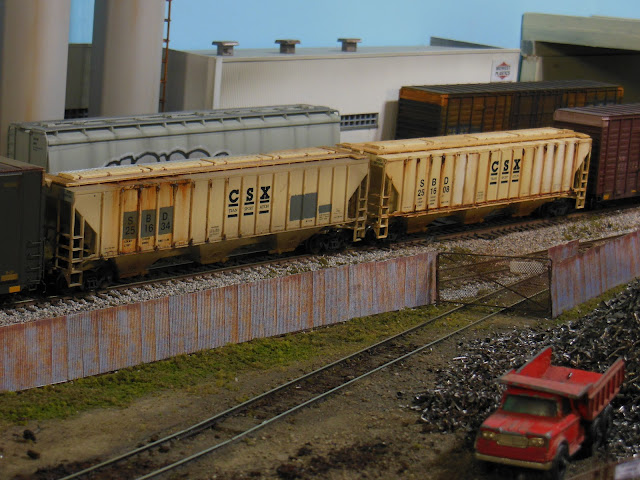 The old dump truck is slightly out of scale, but it was mine when I was a little kid and it's staying there.
Posted by Jimmer at 07:48 No comments:
Email ThisBlogThis!Share to TwitterShare to FacebookShare to Pinterest
Newer Posts Older Posts Home
Subscribe to: Posts (Atom)