Friend Luc gifted me this 3-D printed hopper loading conveyor model a month or two ago. It should fit in nicely over at the transload site.

The model is printed in only two pieces, shown here on the work bench before painting and assembly.  This is the first 3-D printed model I've ever had.  I was a little surprised by the amount of material that had to be trimmed away.  Sure was easy to file smooth though. 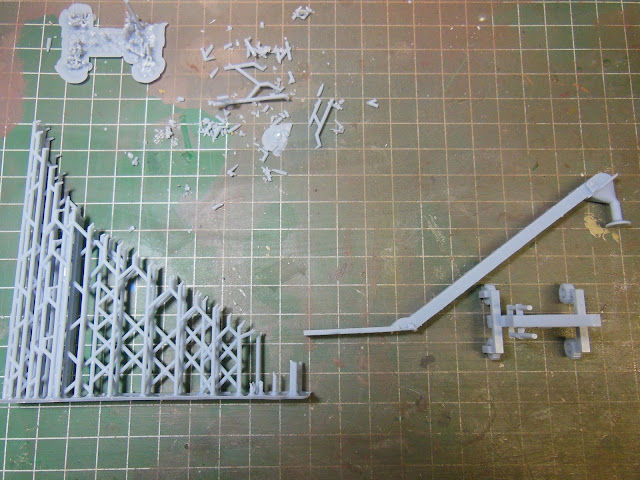 That's the two pieces of the conveyor on the right.  All the other stuff in the picture is the support material that has been trimmed away.  Seems like as much material is lost as there is in the model.

Luc had also sent me this photo below of a somewhat similar conveyor... 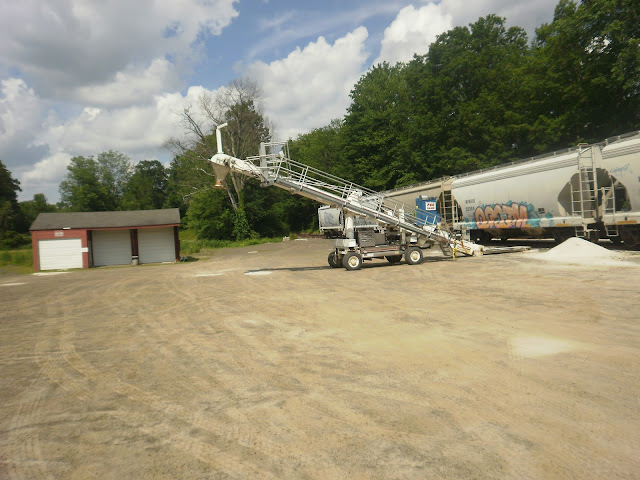 This prototype conveyor has a walkway and railing, and looks like it has a drive motor as well. Perhaps there's a motor available somewhere that would go with the conveyor model.  For now though, I'll just do without. 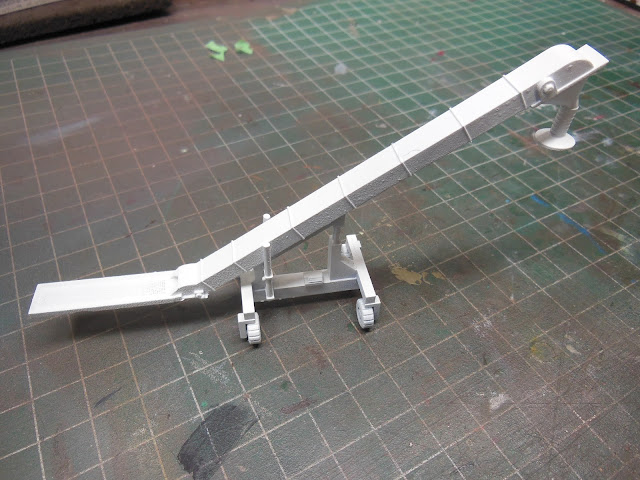 The two pieces of the model are simply press-fitted together, which makes the height somewhat adjustable. Here is the assembled model, painted white similar to the one in the prototype photo. 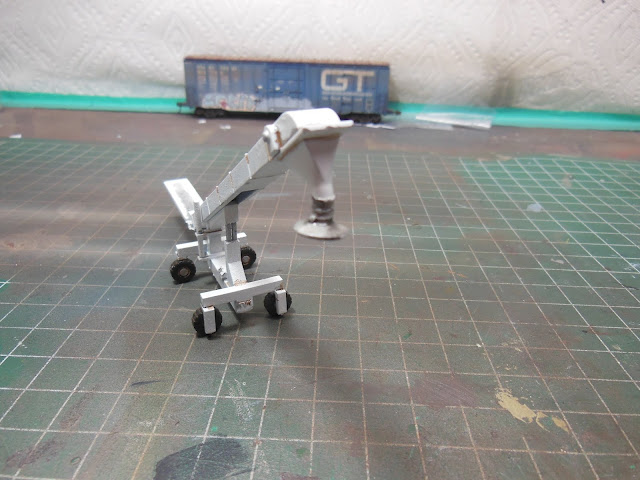 The tires are painted Carbon Black, and a dab of silver is used for the wheel hubs, drive shaft ends, and on the discharge chute.
I shortened the chute about 1/8" so that it would clear the tops of covered hoppers. That means however that the conveyor will be oriented in the opposite direction to the one in the proto photo above, where the feeder end goes beneath the rail car and the discharge end would go to a dry bulk trailer.  I still don't have such a trailer. 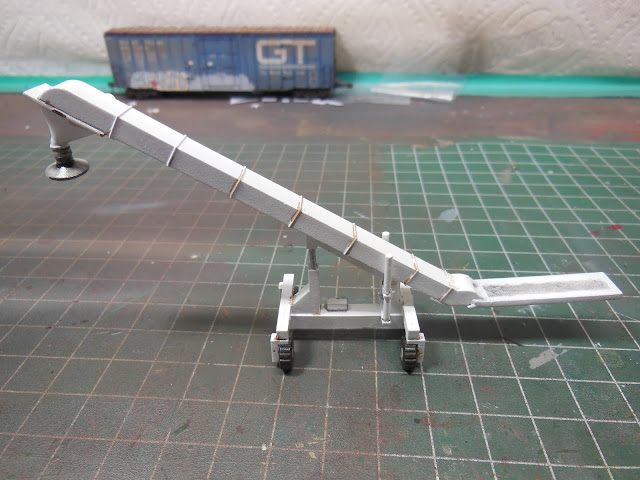 Just a touch of brown Tamiya Panel Line colour here and there to add some light weathering. Also, a light touch of Tamiya black Panel Line to highlight the screen at the feeder end of the conveyor.
Below are a couple of views of the conveyor in place at the transload... 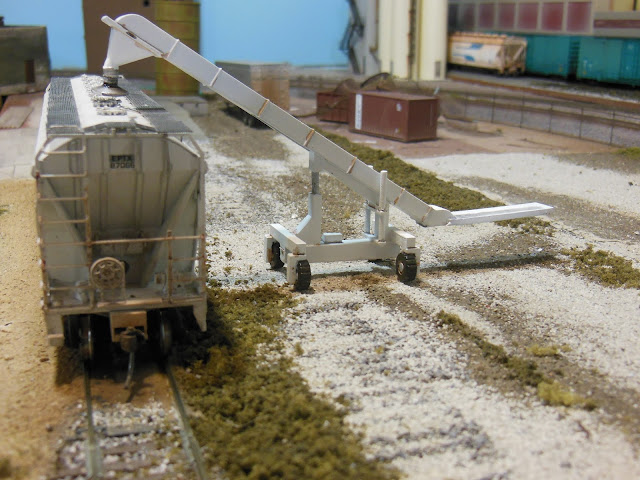 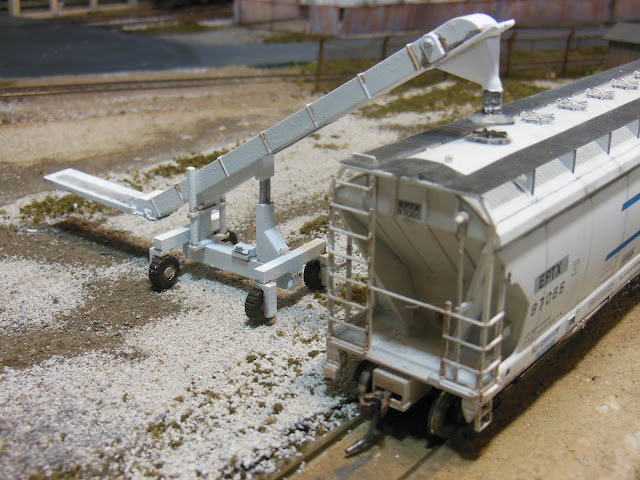 And one more thing... if you've got a few minutes, have a look at this video (link below) which was posted to YouTube last Saturday.  It shows the very nice Seaboard Central layout's last day and final run. The owner - sorry, I don't know his name - is dismantling the layout, with plans to rebuild.

Posted by Jimmer at 07:18 No comments:
Email ThisBlogThis!Share to TwitterShare to FacebookShare to Pinterest

A little more progress on scenery on the layout to show this week.  The photo below shows the roadway guardrail is installed at the curve outside of the rail-to-road transload site. 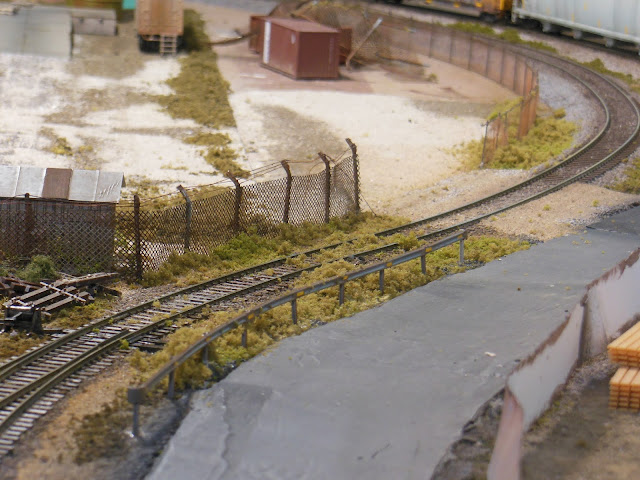 And on the far side of the gravelly driveway into the transload, is a length of chain link fence that I've made.  I could use a bit more, but this piece used up all of the steel wire that I have at the moment.  The closer section of chain link is from a Plastruct kit, but looks quite out of scale when compared to the stuff that is scratch-made with the steel wire and tulle.
And this railing at the end of the street was made by the railroad. 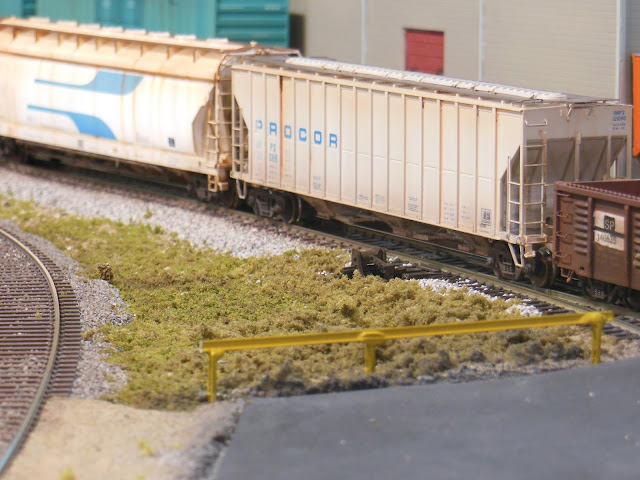 I think this rail should probably have a little rust on it. And probably some of those yellow reflector stripes too.
And another couple of looks at look at Jamie Barron's weathered GTW coil car. 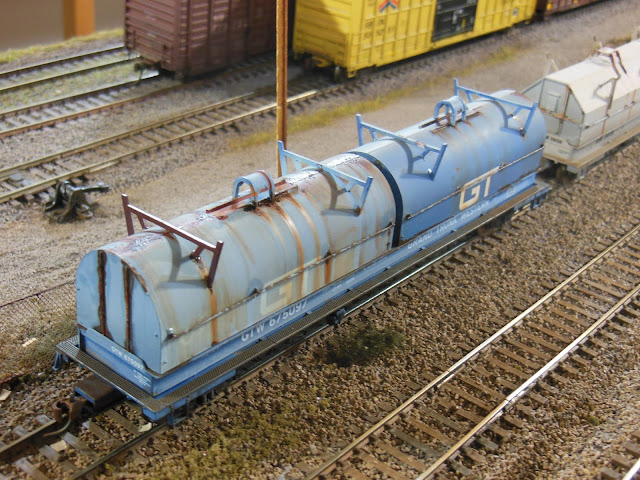 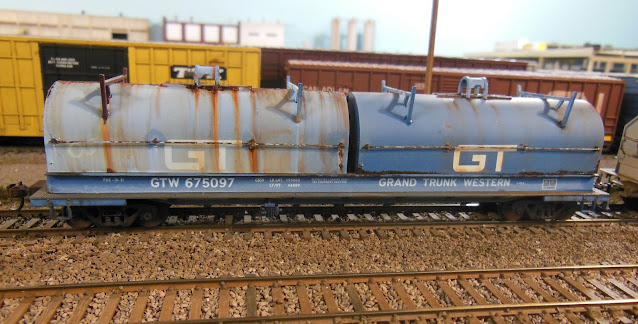 I've also been working on this Union Pacific coil car for Jamie. The original grey paint - sorry, no photo of that - is faded using concrete gray, followed by some light rusting. 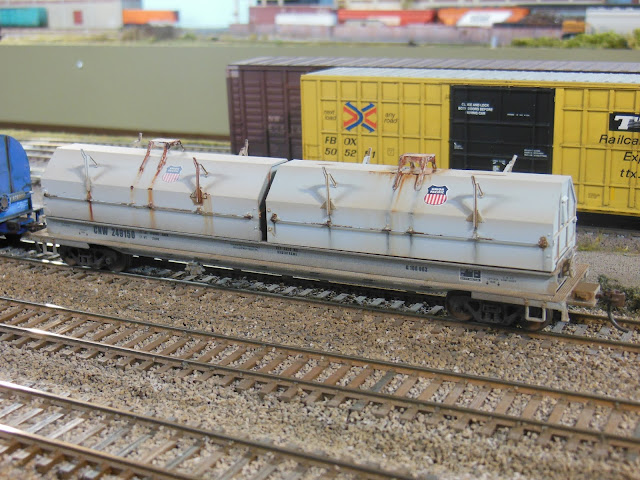 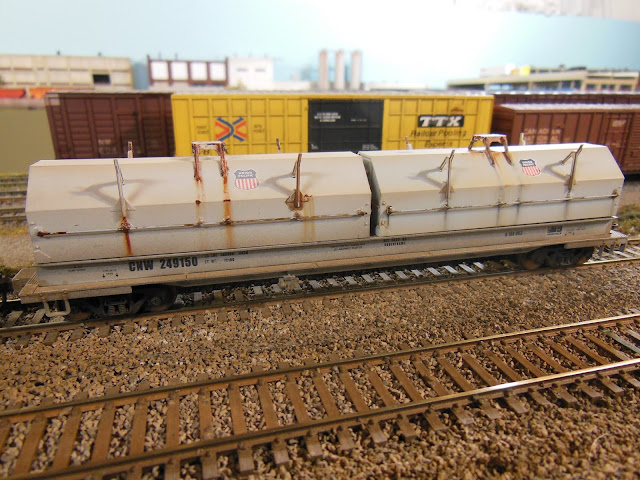 Those triangular shapes on the hoods are shadows from the lighting .
Posted by Jimmer at 07:24 No comments:
Email ThisBlogThis!Share to TwitterShare to FacebookShare to Pinterest

This and That This Week

I've assembled these 3 items, although they're not placed out on the railroad yet.

Top is a guardrail made from a short piece of rail by the railway shops, although it still need some yellow paint. In the middle is a roadway guardrail (Rix kit) with reflective stripes as it's to be placed at a curve, and at the bottom is a length of old chain link fence that will separate JSSX tracks from the transload property.
Also still on the workbench is this GTW coil steel car I've been working away at for Jamie Barron. 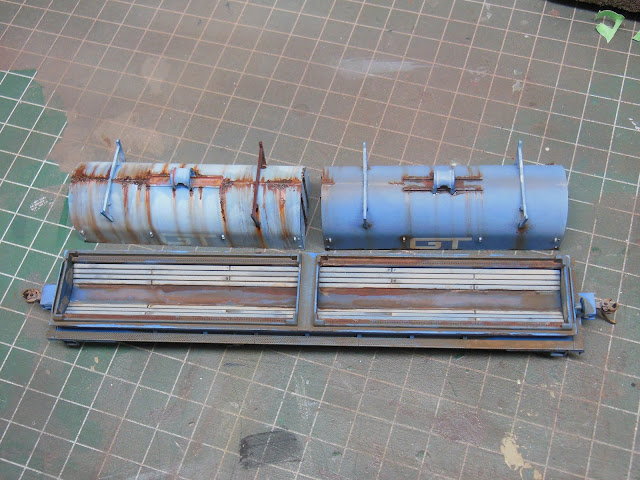 Not quite done yet, I still have to paint the wheels and add the hand rails to the sides of the hoods. 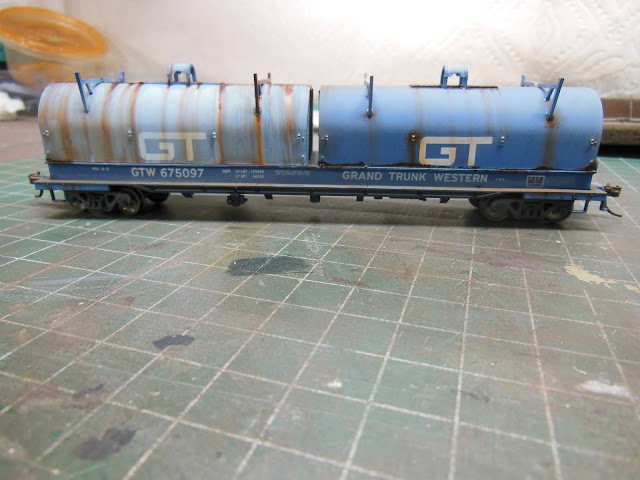 And one more thing...is this very cool night time photo taken by my former neighbor and friend Ian Cryer. This is the lake freighter Algoma Sault (that's pronounced Soo) entering the harbor at Goderich, Ontario. 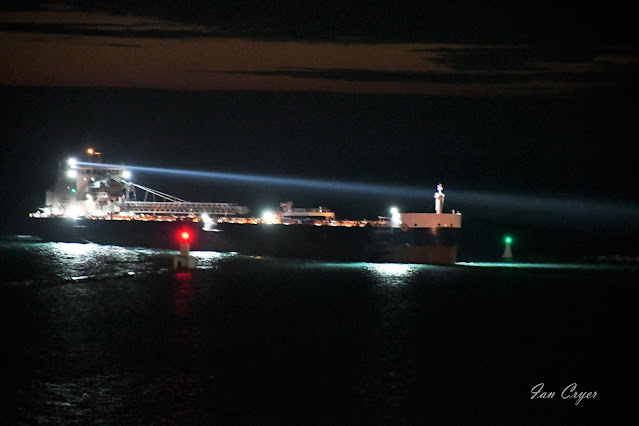 Ian points out that in his photo, both of the navigation lights are lit, which is a challenge as they are each lit for differing lengths of time and for different intervals.

Posted by Jimmer at 07:50 2 comments:
Email ThisBlogThis!Share to TwitterShare to FacebookShare to Pinterest

Not a whole lot going on with the layout this past week.  However, I couldn't help but notice this string of Railbox cars moving along the GTW.  I actually thought this photo would turn out a bit bigger than this, and give a better view of the train. Using Paintshop, I have cropped out everything below the layout, so that's the reason it's turned out this way.

A short JSSX train made up of two tank cars and an empty gondola is also visible switching in the foreground.

The first boxcar in the GTW train is RBOX 1505. 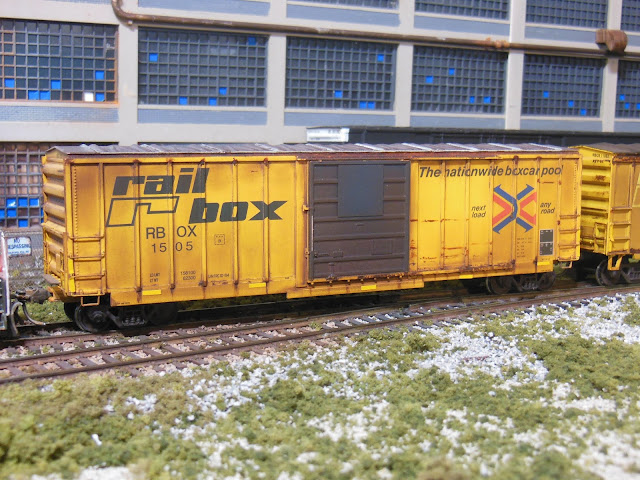 I have recently sort of begun a program of adding the FRA reflective stripes to many of my freight cars.  The ones I've put on this RBOX are the peel and stick type produced by Smokebox Graphics. 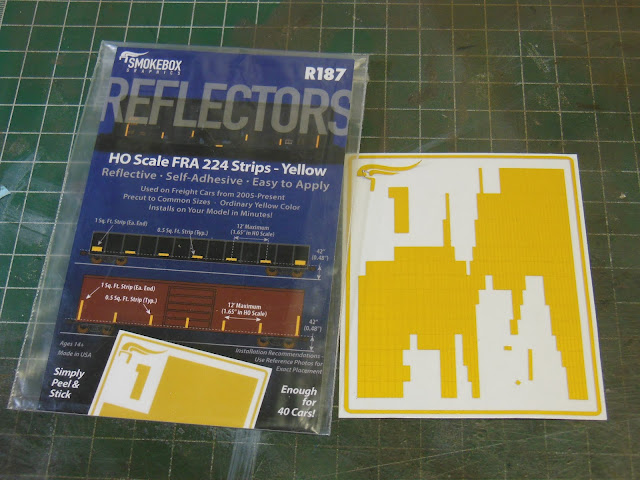 I don't know how many individual strips there are on a sheet, but it's certainly quite a few, and the package only costs about 5 bucks!  The label says there are enough to do 40 cars. 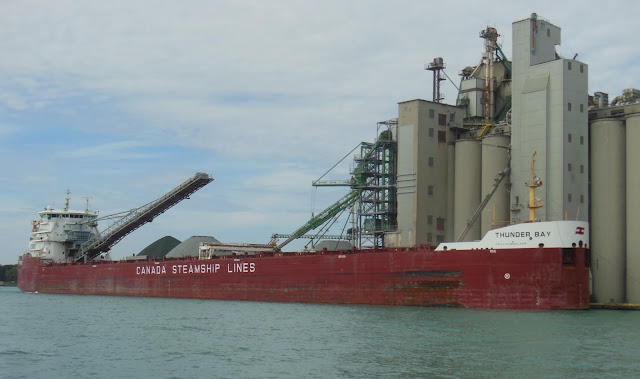 CSL Thunder Bay taking on a load of grain at the Sarnia elevator dock last week. The freighter is in Quebec City unloading as I write this.  I think it sure would be fun to build a model of something like this, but even if I had one, where would I put it?

Posted by Jimmer at 10:10 3 comments:
Email ThisBlogThis!Share to TwitterShare to FacebookShare to Pinterest

A Little Work On The Layout

Last week I wrote here about starting to work on an area of layout as a break from doing more freight car weathering, so here's just a little bit of progress on that front... 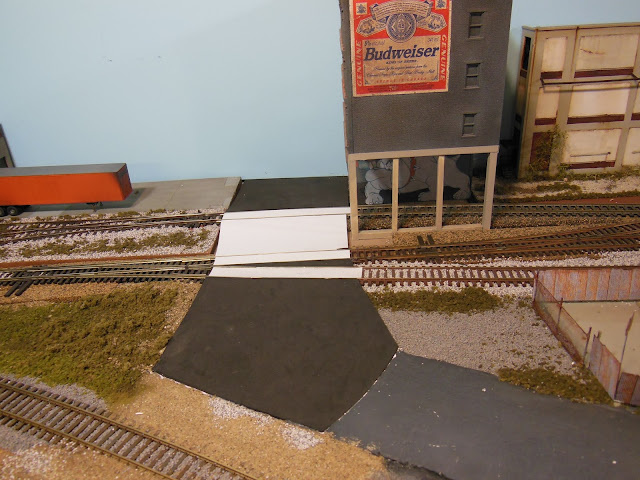 I had never done any work at all on the crossing that I intended for this location. The road just sort of ended at the edge of the track. The black part of the road is 1/8" foam from Michaels, and the white portions are .020 styrene. 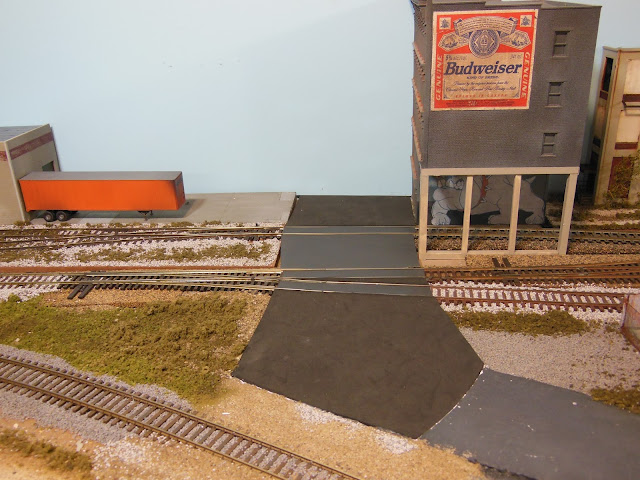 I painted that white styrene with "weathered black". I'll also spray that on the black foam as well to fade that down a bit.  I think I might have just barely enough ballast on hand here to fill in that track switch at the left.  I don't have any crossing gates or warning lights to put here.  Hopefully sometime.

I submitted this photo (below) from the layout to Model Railroader magazine recently, to see if maybe they would use it in the Trackside Photos section of the magazine.  I very quickly received a nice reply back from the editor explaining that although they would like to use the photo, they are unable to do so because of the short depth of field of focus.

And you know what? He's right. 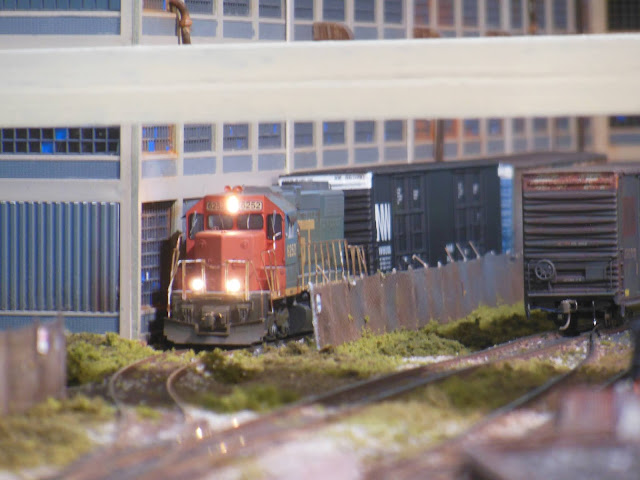 The engine is in focus, which it should be of course. But the industrial building goes out of focus, and the foreground including the overpass is way too blurry also. My little camera doesn't allow me to change the aperture setting, so controlling depth of field is a problem.
So, I sent in a couple of other pictures to MR that have better focus, and quickly received a note back telling me that they should be able to use one of them. My fingers are crossed that sometime in the future one of the two will appear in the magazine.
Posted by Jimmer at 07:44 2 comments:
Email ThisBlogThis!Share to TwitterShare to FacebookShare to Pinterest
Newer Posts Older Posts Home
Subscribe to: Posts (Atom)