I was going to spend a few minutes down at a favourite railfanning area on the JSSX, trying out a new camera. The lighting is good in this area - daylight balanced LED's.

This nicely weathered D&H boxcar was spotted on the spur at the local storage warehouse. In the background happened to be the same Ferromex boxcar that I had featured here back on May 18th. It's sitting out on the street trackage, waiting to be spotted to the same warehouse dock as the D&H car. 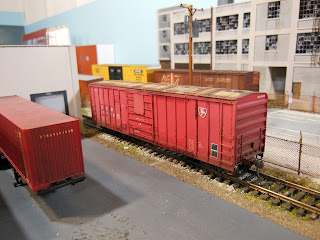 Anyway, it dawned on me that I had only shown one side of the Ferromex boxcar. So let's take care of that first. Here's the side not shown before, which has had the graffiti and/or rust painted over, new data markings, and a (blue) replacement uncoupling lever. 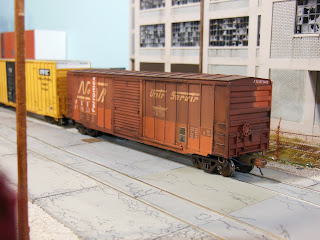 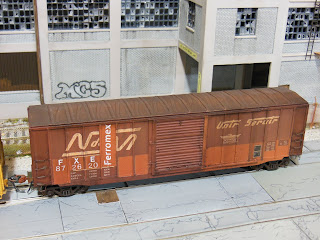 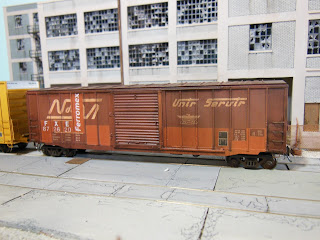 And now, here's the D&H boxcar as well. I looked around the interwebs for photos of these cars, but didn't really find any in this paint colour, so I just decided to just wing it on my own. The boxcar started out like this:

I began by spraying a couple of panels on the roof with ModelFlex Primer Grey to give the impression that those panels were replacements. Then I sprayed the boxcar sides with ProtoPaint's Flat Haze, which is a whitish colour, to fade down the red.  I learned of the Flat Haze product from George Dutka over at   http://whiteriverdivision.blogspot.com/  and this was my first time trying it out. I didn't want to go too heavy with it, because I figured it might turn the original red too pink. I put between 3 and 4 coats of the Flat Haze on the car, depending on where you're looking. For instance, the area to the right of the door received less fading than other panels did.

Once satisfied with the fading of the red, I set about adding the rust scrapes to the ribs, doors, and door tracks.  I rusted the two panels on the roof, but after looking at it for a few days, I wasn't really satisfied with the roof's appearance. So I masked off the sides of the car, and sprayed the rest of the roof with the primer grey again and then rusted the rest of the roof with burnt sienna and burnt umber paints. 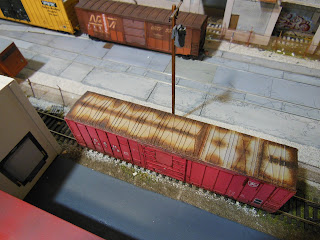 I weathered the wheels and trucks with Krylon Camo Brown. I always mask off the wheel treads before spraying them with the paint. 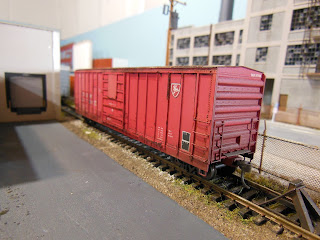 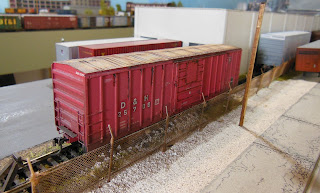 I haven't really done much of significance on the JSSX this week, so I'll just offer up a few recent pictures from the area of the diesel shop here in Sarnia. A bit of variety on a hazy Monday, May21, 2018. We have from left to right:
CN GP9RM 7022 with the long hood end up on blocks
CSX GP38-2 2561
Nova Chemicals switcher (in blue and white) but I couldn't quite see the number
exCN switcher apparently for parts use, but again I can't see the number
Lambton Diesel Specialist switcher 1515
Lambton Diesel Specialist switcher 1391.

Maybe they're changing out the electric motor or wheelset on 7022. I wonder if they had to take the plow off the front end to tip the locomotive up like that.

The two black LDS switchers have the letters "LDS" scripted on the long hoods, but are lettered JLCX on the cabs. 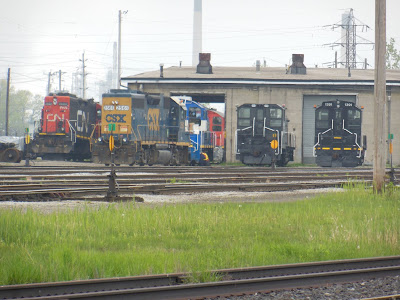 At the same time, just a hundred yards to the east, GP 38-2W number 4774 with a very well-worn paint job is coupled up with GMD-1 number 1437 as the two get ready for switching duties in C-Yard. It was explained to me that the crews aren't too happy about this consist, as one locomotive is turbocharged, while the other is not. They don't react to commands at the same time, making spotting the cars at loading racks more difficult.

I find the red flag in the foreground a bit interesting, as just a short ways to the right (west), that track merges into the main that runs through the St.Clair River Tunnel to Michigan, but 50 yards or so to the left, it's rails are removed. 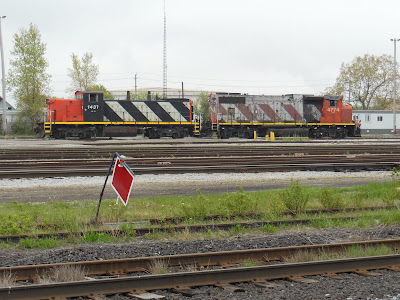 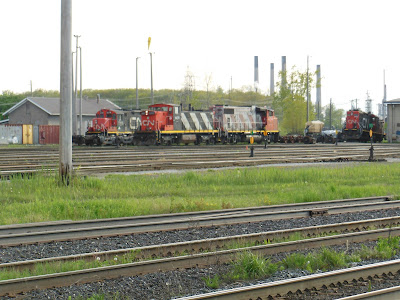 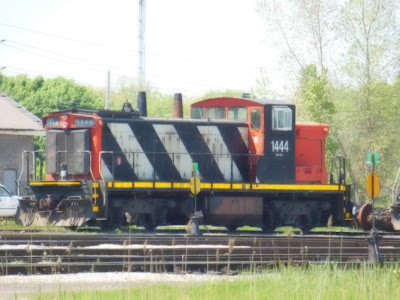 Posted by TrainGuyJim at 20:43 No comments:

Graffiti's Not Usually My Thing

I feel like I don't really do much graffiti around my railroad, but there is some here and there. And if I want the setting to be urban and somewhat contemporary, I probably should have a fair bit more than I do.

Here's a boxcar that I weathered up a couple of years ago, inspired by photos on-line and a fistful of graffiti decals that my friend Luc gave me. The boxcar is from the Atlas Trainman line. Although the Trainman line may not have the detail other brands do today, they're not easily damaged either and that can be a positive thing.

I first airbrushed over the boxcar brown with acrylic Terra Cotta to tone it down, then painted in the patches. I put the graffiti decals on and then followed that up with washes of thinned black acrylic top take the shine off everything. Dullcote too. (Edit - Well, actually the Dullcote was done at the very end.)

I found the decal of the Spanish looking gentleman to be particularly interesting, and thinking he'd go well on a car from Mexico, placed him prominently on the boxcar door.  The star at the right-hand end of the car is my own artwork with a white paint pen. I was given the vertical Ferromex decals by Sean Steele. The white reporting marks and numbers are from a Microscale alphabet set.

This boxcar make occasional appearances around the JSSX. Special thanks to Luc and Sean. 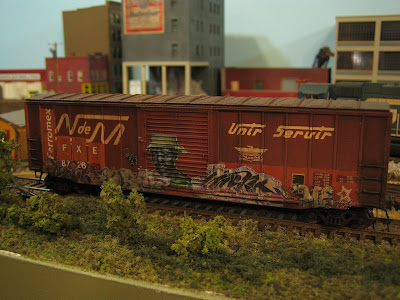 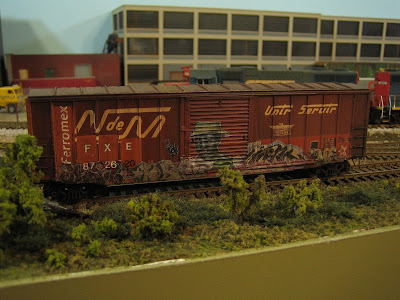 On my way to pick up pizza for Friday night's supper, I intentionally left a few minutes early so I could make a trip past "C Yard" here in Sarnia.  I was glad I did, as when I got to the yard, there was one of the few remaining SCLAIR covered hoppers sitting out in the open. The plant that is home to these cars is just a15 minute or so drive from the yard Sarnia yard.

These colourful 3 bay cars used to be fairly commonly seen in the yard here, but now...well, not so much. Built by ACF, and originally lettered DOCX (for DuPont), the few that remain are now part of the Nova Chemicals railcar fleet, and as such have been patched and lettered NCLX. More pictures of these former DuPont cars can be found online for sure, but I was happy to take this one myself at the local yard. 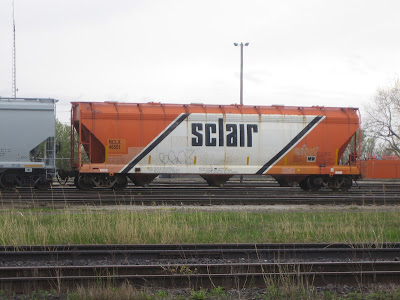 Once back home a little later on, and after the pizza and taking the family pet (Scruffy) for his walk, I went downstairs to the JSSX.  Glad I did, because there, sitting out in the open was this car in a somewhat similar scene... 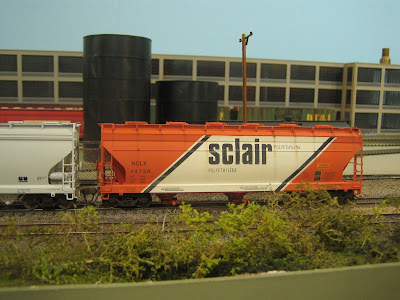 This is the Intermountain car (47020-10), but I also have a set of decals from Highball Graphics (F-164) that would at some point allow me to create two more of these pellet hoppers. Come to think of it, wouldn't a string of 3 look nice on the layout.
Posted by TrainGuyJim at 07:33 2 comments:

As I showed last week, I was at the train show in Woodstock (Ontario), and came away with a few items, which of course increased my already long list of things to do.  I liked this 50 foot flat car enough though that it moved directly to the top of my list of projects. Here it is, as purchased, sitting outside the JSSX shop with the price sticker still on it. 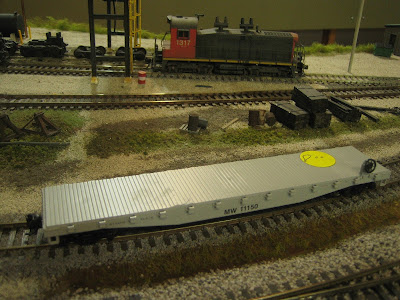 The flatcar is an older model, made by either MDC or Athearn, I'm not sure which. After peeling off the price sticker, the first thing to do was to carve off and file smooth that annoying little nub in the centre of the deck. It's always been my understanding that this is left there by some part of the molding process. I'm sure most of us have seen these in the centre of the roofs of older boxcar models as well.  I've often wondered why in the world they wouldn't have just taken a moment to smooth these things off at the factory, but I guess we've all bought them anyway, so maybe I've just answered my own question.

I used a small square of 100 grit sandpaper to take off most of the paint on the deck. As I wanted to have this car appear to have quite a weather-beaten wood deck, using the sandpaper also had the added benefit of leaving fine scratches that would simulate wood grain. 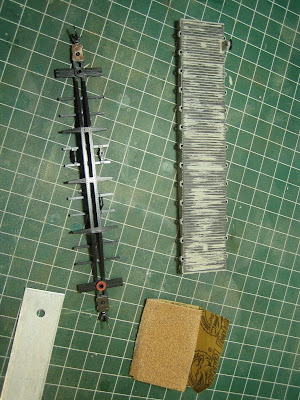 I ran the back side of my Xacto blade through each of the spaces between the deck planks to clear out the paint that was in between and to give the individual planks some separation and a bit depth.  I also sort of curled the blade around the ends of those spaces to add just a touch more definition to the planks.

As for weathering the deck, I first painted the deck with some thinned Craftsmart Brown acrylic, then randomly went over that in some areas with FolkArt Barnwood and some areas with Craftsmart white. Once dry, which doesn't take long, I again cleaned the paint out of the spaces between boards with the Xacto knife. I'm quite pleased with myself for not slicing any fingers with the Xacto knife. Then, I went over the whole deck with a couple of washes of a good old India ink/alcohol mixture wash.

I added 2 steel plates to cover over some holes in the deck.  The plates are .005 styrene, which I first painted steel grey, and then rusted with artist oils.  Really hard to see in the photos, but using a black .005 tip artist pen, I added the illusion of bolt heads holding down these plates.

There happened to be a piece of brass wire laying close by on my workbench, so I cut a small piece from that and then bent it at both ends.  After painting, I actually just dropped it onto the cars' deck and then glued it down where it landed, representing a pry-bar that had perhaps been tossed onto the deck and left behind. 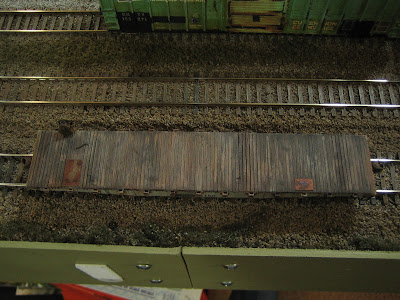 With the deck finished, attention turned to the side sills.  I "painted out" the MW letters with flat black trim film, then added the JSSX lettering from a Microscale decal sheet. The rust and grime streaks on the side sills of the flat car were made with artist oil paints of burnt sienna and burnt umber. Just a tiny, tiny dab of paint where the streak is to begin. Then a flat brush dampened with Micro-Sol and drawn straight down to create the streaking. Use perfectly vertical streaks only for this. Always.

I rusted up the stake pockets with the burnt umber, carved off the oversized, clunky looking side steps and replaced them with finer ones, made uncoupler bars from a bit of wire, and added air hoses to the ends as well.

That's about it. This flat car is going to fit right in with the work train maintaining the JSSX. 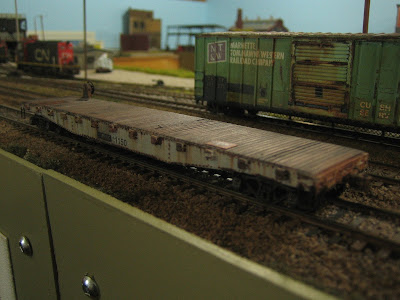 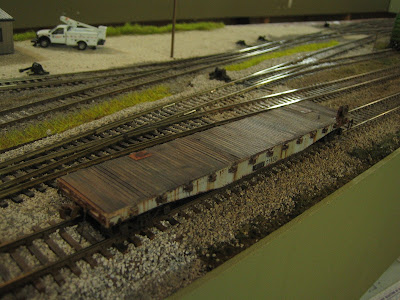 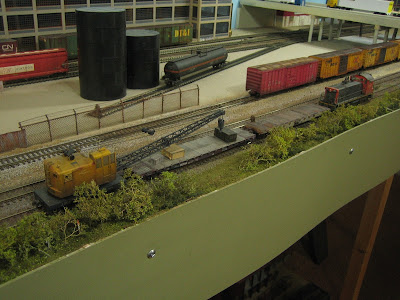 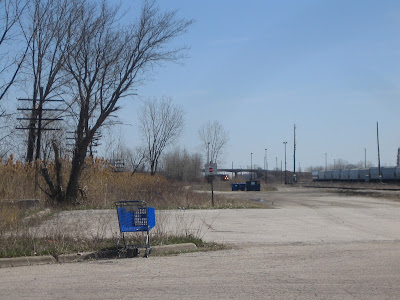 Posted by TrainGuyJim at 06:40 No comments: