The good folks at ExactRail send me an email at the beginning of each month, highlighting their monthly specials.  I've been trying not to  buy very many freight cars, as I think that I've actually got plenty, but this month featured a sale price ($29.99 USD) on their 50 foot Evans boxcars. These particular at this price apparently struck a nerve though, because I went ahead and ordered 3 of them for myself. 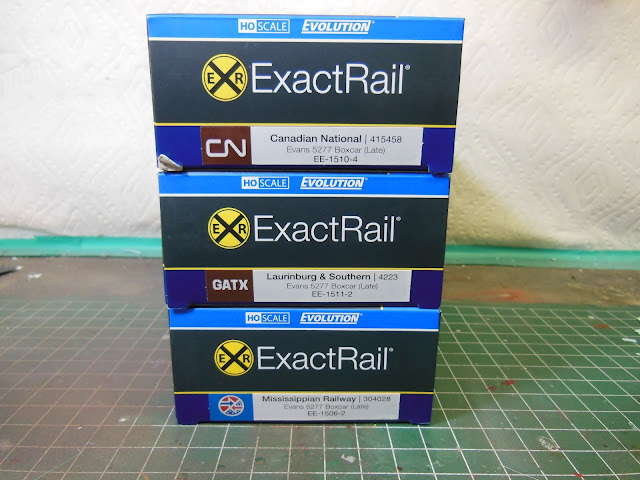 Here's a quick look at the three that I ordered, as new and fresh out of the box... 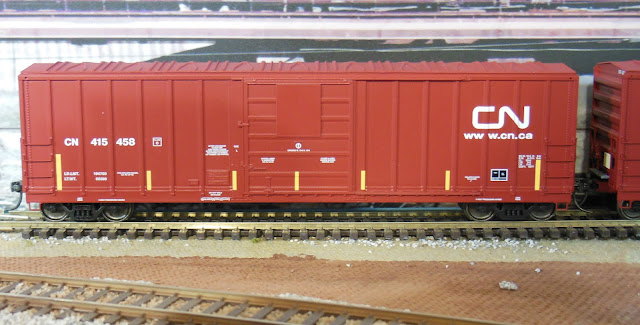 Telling myself that it would make sense for another CN car to appear on the GTW, I included this one in my order.  The boxcar red or brown or whatever it is appears brighter in person than in the photo. 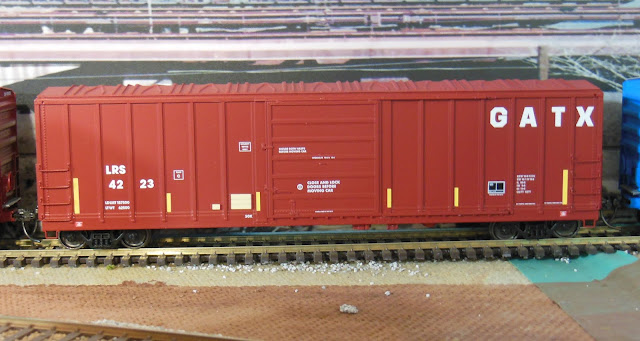 I'm not really sure if they were the exact same type of car or not, but my friend Luc had cars with the large GATX lettering. I thought they really looked sharp, so with that in mind, I ordered this one for myself.
And this next one is my favourite of the three...

Mississipian Railway apparently move a lot of lumber and bentonite clay. I'm hoping this nice blue will fade down well (whenever I get to it).  The crank wheel for the doors is a neat detail.  Hopefully I don't break it off. Too bad that it doesn't actually operate.
One more thing...here's a link to a 3 minute YouTube video I found of a cab ride in a Mississipian Railway GP9.  It's a pretty bouncy ride. https://www.youtube.com/watch?v=BcHeX38aRdI
Posted by TrainGuyJim at 08:05 No comments:

A pretty interesting load being moved, outside of the Lambton Diesel Services shop in Sarnia back in mid-July.  Not one, not two, but three diesel prime movers on a single flatcar. The eight-cylinder engine at the right-hand end looks like it is opened right up.  The other two look to be 12 cylinder versions. 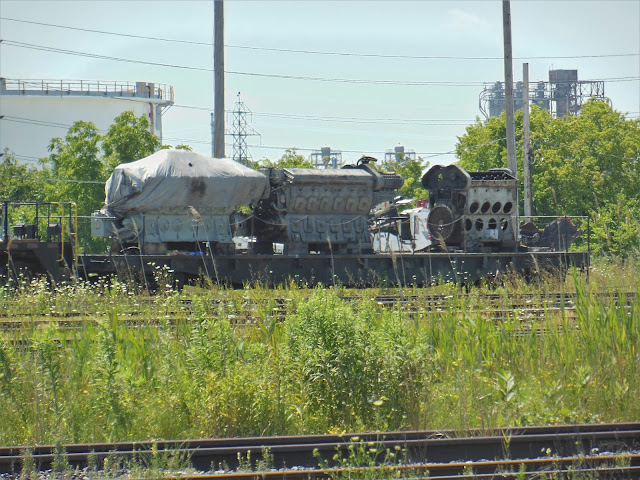 I can't see a reporting mark or number on the flatcar.

I guess one of them must be from this switcher... 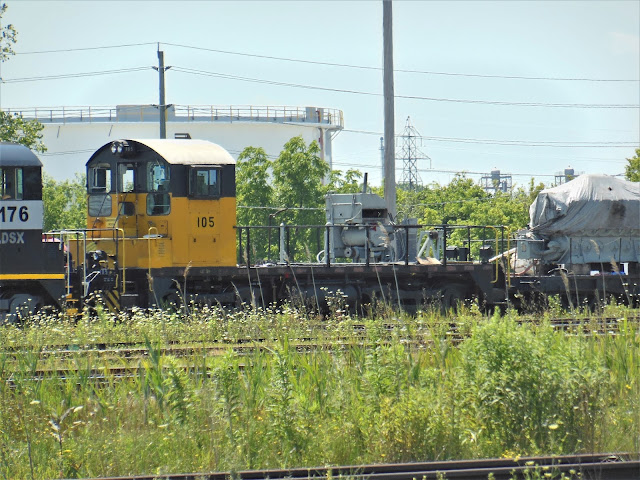 Essex Terminal switcher 105 is, was, or will be, an SW1200.  Originally built in March 1956 according to rrpicturearchives.net.  Wouldn't something like that make for an interesting model on a layout?
Walthers makes a model kit called the EMD Prime Mover, which represents a 16 diesel cylinder engine. Here's a link to that kit on that on the Walthers website. https://www.walthers.com/emd-567-prime-mover-kit  The kit doesn't take long to put together, as it's quite straightforward to assemble and only costs about $10.
Here's a look at the one that's been sitting around the JSSX maintenance shop... 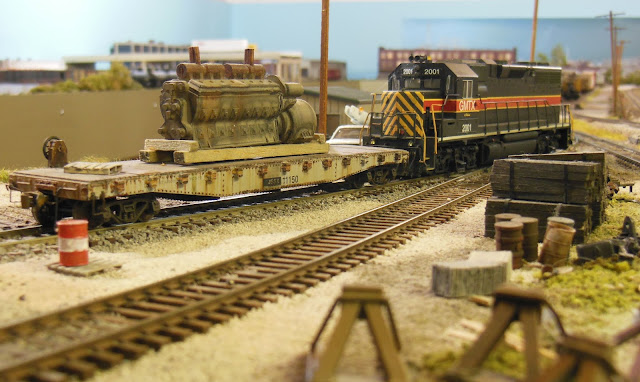 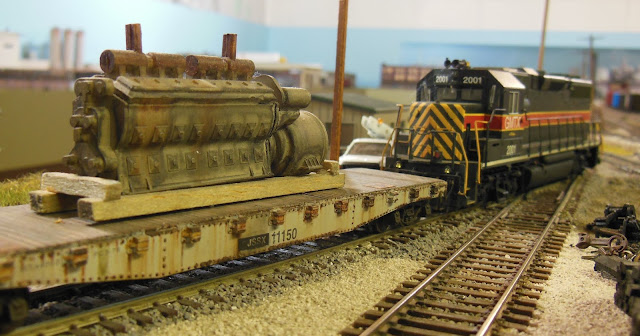 A little bit of a closer look 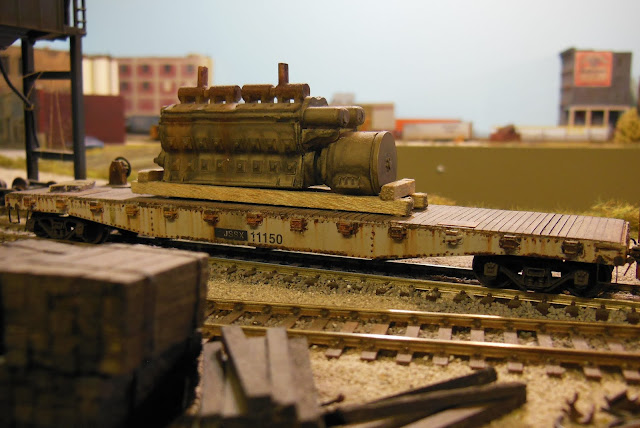 I made the frame for the engine to rest on from balsa scraps, but looking at the prototype picture above, they all seem to be sitting on smaller wooden blocks. 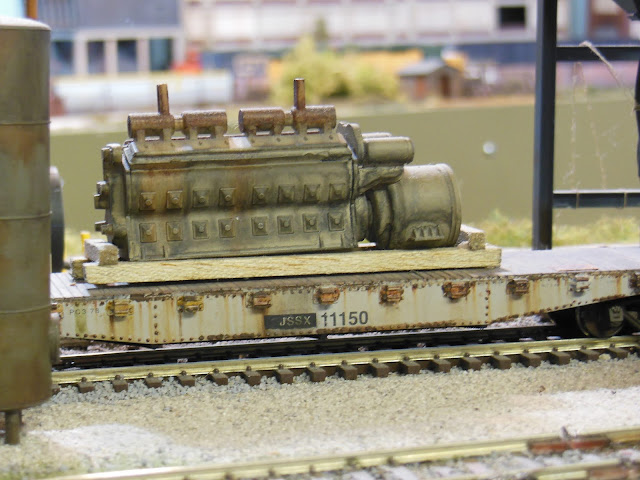 A close up look at the Walthers prime mover.
Posted by TrainGuyJim at 09:00 2 comments:

Elevated Sanding Hopper at the JSSX

I post occasionally at trainorders.com, and a few weeks ago someone commented about the elevated sanding hopper on the JSSX that was in the background of one of my photos. I thought that this time we'd have a look at that feature, which towers above the shop track. This interesting structure was given to me several years ago by my friend Luc Sabourin. 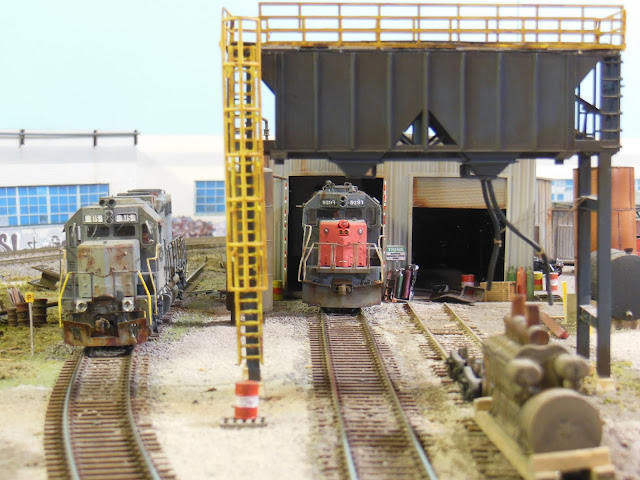 At some point the yellow safety railings around the top had broken off, so I've just recently rebuilt and replaced them.  Gotta maintain the safety of the worksite! 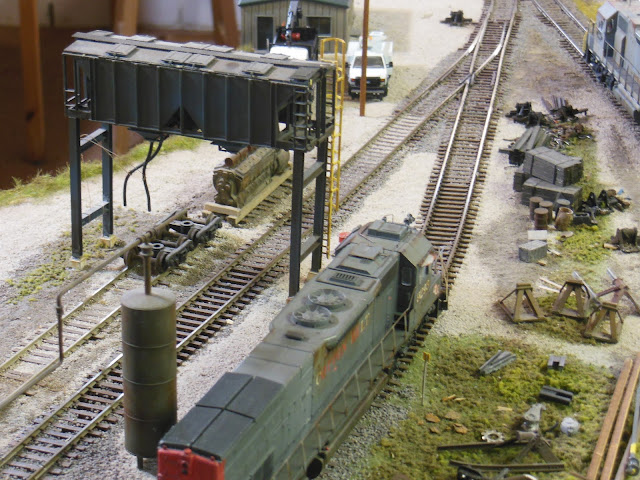 I don't remember who assembled the sanding hopper model for Luc, but it sure is a nice feature for me to have on the JSSX. 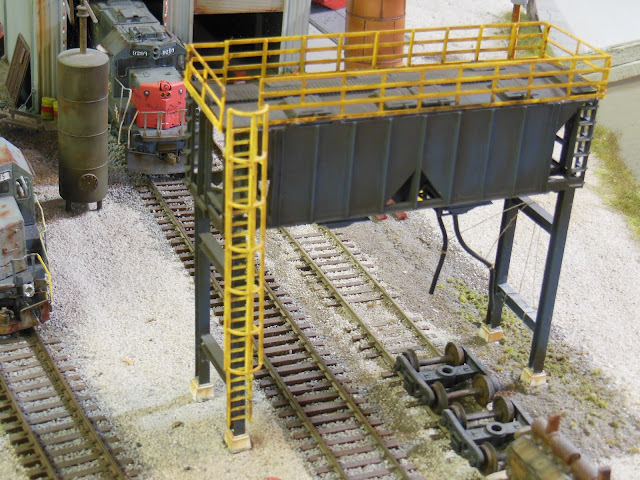 A neat feature included are the "ropes" that hold the two sand hoses out of the way as locomotives pass under the sand hopper. 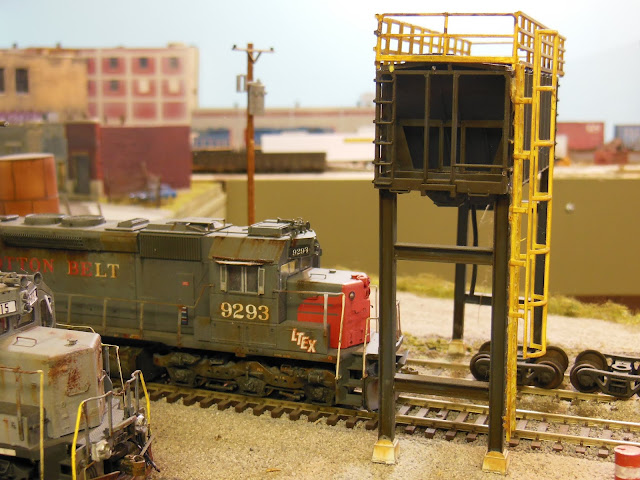 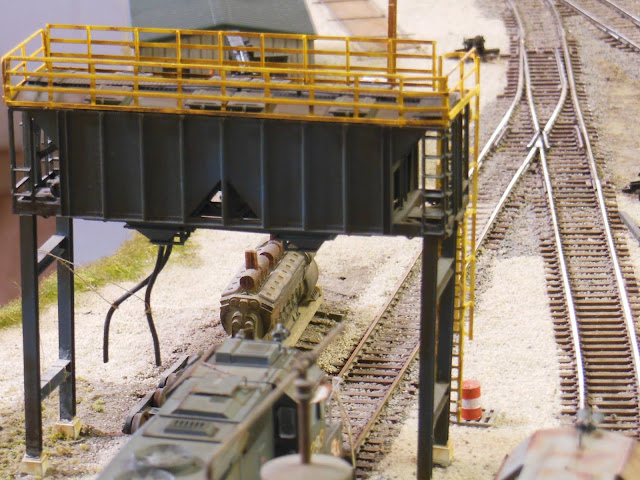 And a look from the opposite side.

It's always a bit surprising to me when I'm searching online for something that has to do with model railroads, and one of the responses that Google comes back with is an image of one of my own models.  That's just what happened a couple of weeks ago, after emailing back and forth with the George Dutka about an Evans boxcar.

The car below isn't the specific one that George and I were emailing about, but later on when I searched "Evans boxcar photos" on Google, this old photo of one my own freight cars popped up... 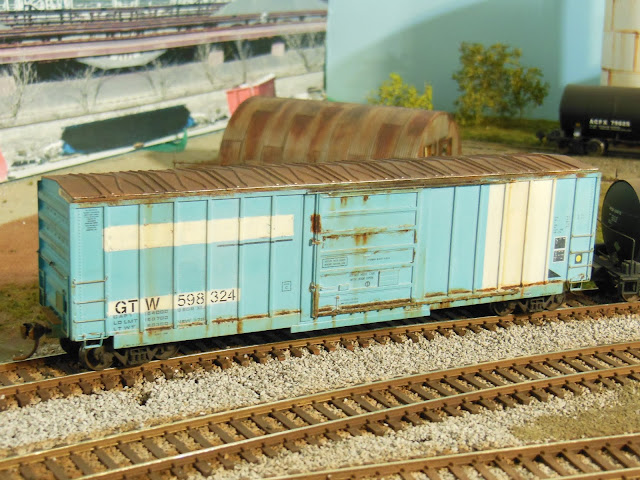 Pretty sure I've told this story before, but I was never actually all that happy with the way this car looked after I'd patched and weathered it.  In fact, I took it to a train show to sell, but apparently no one else at that show liked it all that much either.  It came back home with me and sat in the cupboard for some time, until I eventually got ambitious and completely re-did the work I'd put into it.
The number is different after the second time around, but this is the exact same car as in the photo above.  I really like this revised version much better, and now it's out on the layout pretty consistently. 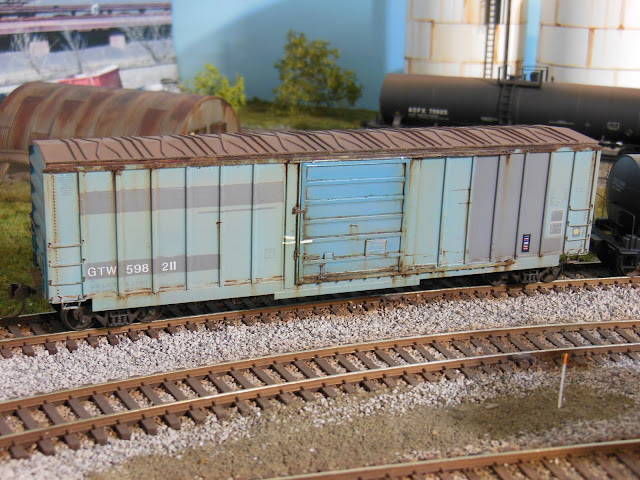 The same Evans boxcar in the same location on the layout yesterday afternoon, with a new reporting mark number and paint that has been faded as well. Instead of the somewhat stark white patches that I had painted the first time, the car now has more muted grey patches that have been faded as well.
Posted by TrainGuyJim at 07:59 3 comments:

I had noticed recently that a bit of paint had flaked off of the fans on GP38 #813, so it was scheduled in to the maintenance shop to get that taken care of. 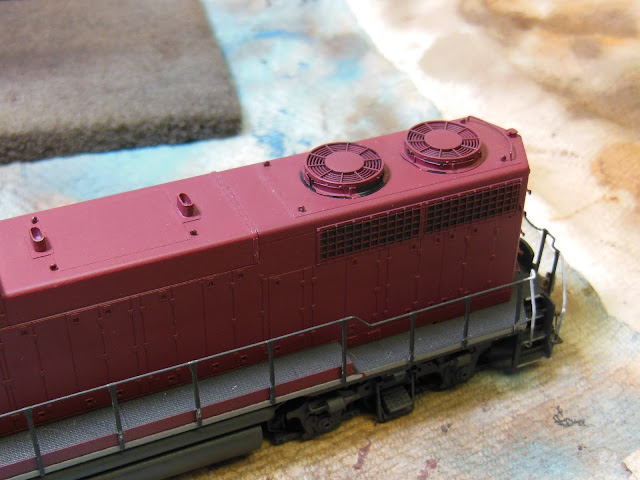 While 815 was in the shop (workbench), it occurred to me that some reflective saftey striping along the sills might look good. Since another JSSX GP38, #813 already has such stripes, there's a bit of logic to the idea that the maintenance crew (me) would apply them to 815 as well. 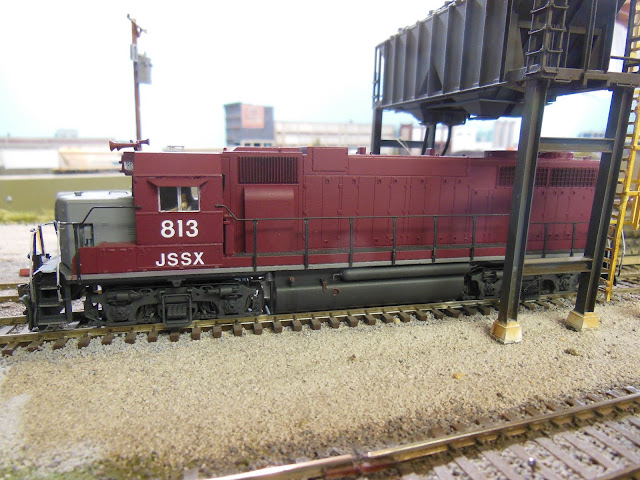 813 on the way into the maintenance shop 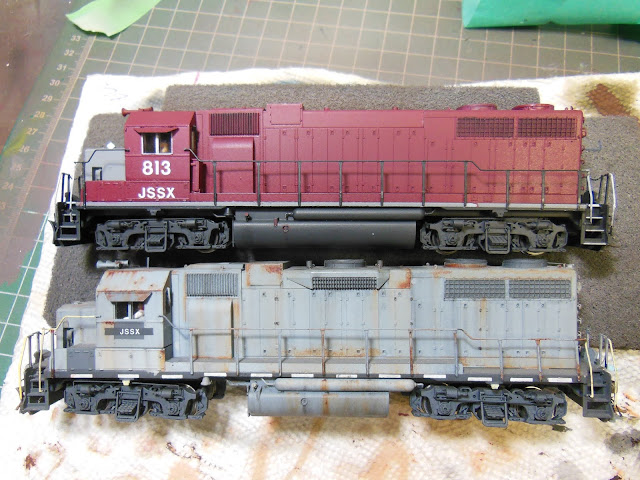 A view of GP 38's 813 and 815 in the JSSX Maintenance Shop (workbench). Note the dash style white reflective stripes on the sill of 815. Well, they're not really reflective, but merely white trim film that has been cut to size. Using an Xacto blade, I cut the trim film width to be about 4", and then set up my chopper to cut the individual stripes to uniform 2 foot lengths. 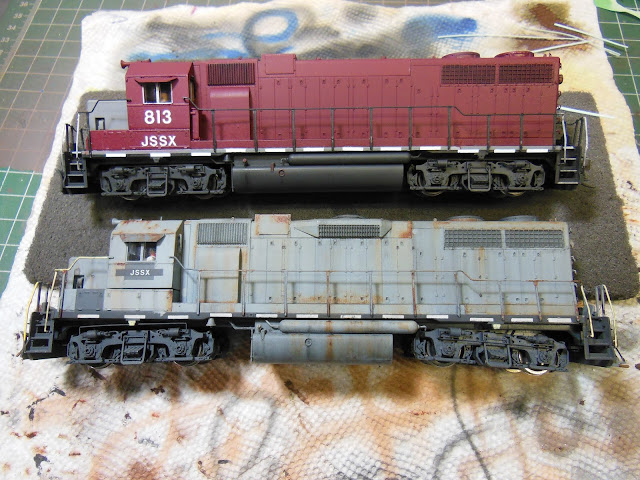 And after 20 minutes or so of diligent work by the JSSX maintenance crew (me again), the 813 has had the paint problem touched up, and the safety stripes applied along the sill. 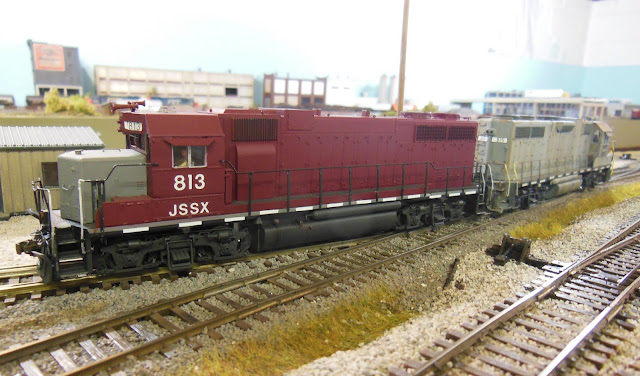 Following are a couple of shots of the improved 813 as it sets out on the business of the day... 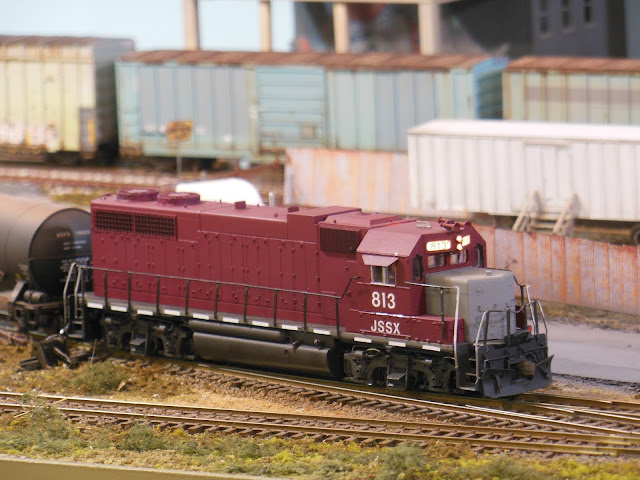 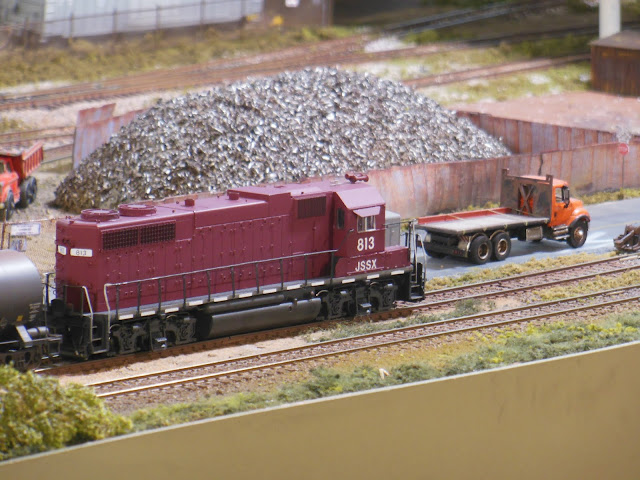 Posted by TrainGuyJim at 08:03 No comments: