A New Industry for the Layout

Got started just recently on a new industry for the layout. It's intended to go along the GTW line, to fill in an area that's been under utilized.  In fact, hardly ever seen any real use at all.

I'll be kit bashing this one from the Walther's Magic Pan Bakery kit, and it's going to take me quite some time to finish it up.  I chose this kit for a project because the main building has "concrete block" walls for the main building, rather than the typical brick walls that so many of my other structure kits seem to have.

This is the kit as pictured on the box. Inside the box, there's an office, the main plant building, four silos, and a transfer building, plus details such as stairways, a ladder, and piping to assemble, so it should be fun.. 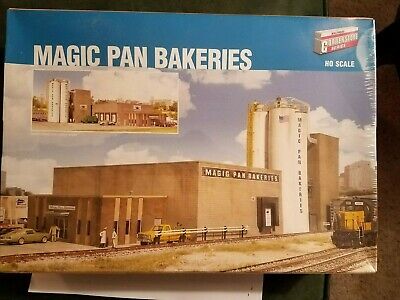 I'm intending to use most of the kit of course, but not all of it, as I can't really see a use for the office part of the structure right now. I will reconfigure everything else as best I can to fit the space that I have available.
As I have come to expect with the Walther's kits, the instructions are a bit cryptic, as the diagram for the silo assemblies are blurred together.  And the silos aren't round after they're put together either.  I ran into the same problem a couple of years ago with their silos on another model.  Those things aside, I've been enjoying putting this one together so far.
I've been painting and weathering most of the pieces before assembly, and I've changed the orientation of the building so that the stairway will be more visible.  Doing so meant making small changes to some of the piping as well.
Lots to do yet, but here are a couple of photos from the workbench of what I've managed to accomplish so far.  I think it's looking pretty good... 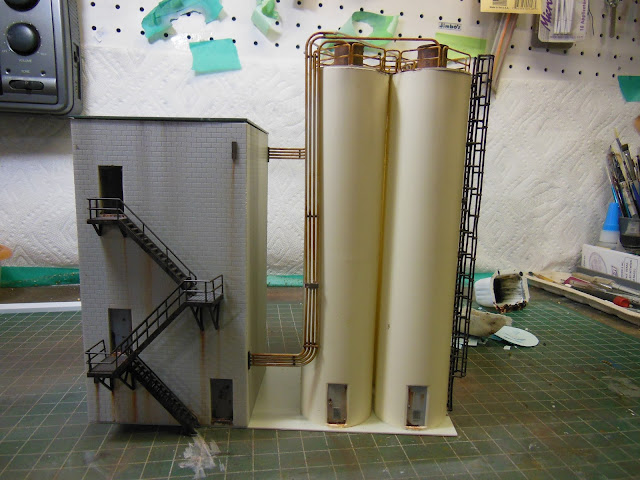 Hard to tell in this view, but I've modelled the top door open.  I've shortened the vertical piping by about half an inch because, as Luc pointed out to me, the pipes would have been obstructing access through the bottom doorway. That's because if following the instructions, the wall with the stairway is supposed to be facing the silos. 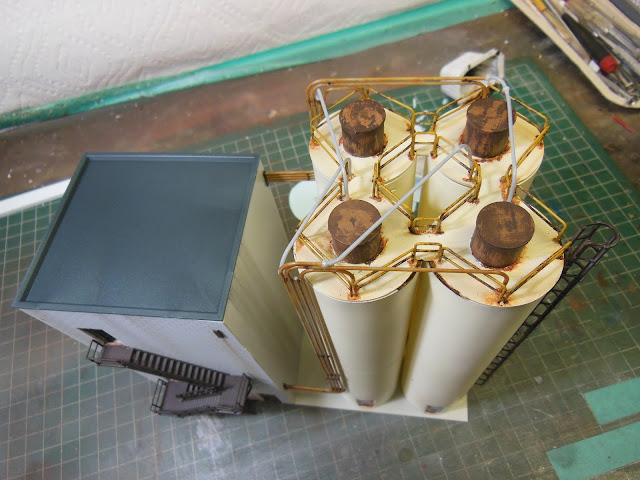 Top-down view above the silos.  The 4 grey sections of piping still need to be painted, and I have some spare roof details here that I can put on the top of the transfer building. 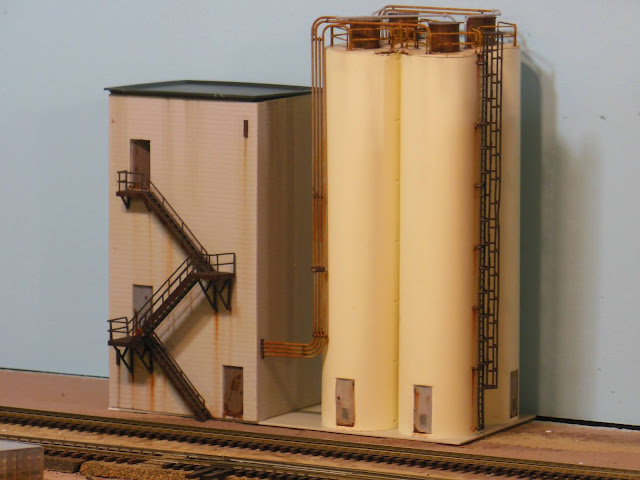 Set roughly into place on the layout, the rest of the industry will be on the left-hand side of the transfer building.