Switch Replaced, and a Berwick Boxcar

Well, that messed up track switch at my Wright Bridge and Tank fab shop has been replaced...didn't really take all that long for the track crew (me) to do either.  Maybe a little over an hour. With the new Peco replacement being shorter than the Atlas switch was, I had to splice in two short pieces of rail, about 1 1/4 inches long.  I also added in an extra electrical feeder.

After a few test runs with a couple of different gondolas and an engine there were no problems running there at all. Things were good so I also ballasted the switch and even added in a little bit of greenery. With that done, the area runs better and looks better than it did before.  So I'm calling that a "win". I did neglect to paint the sides of the rails though, so I'll have to try to get to that sometime soon. 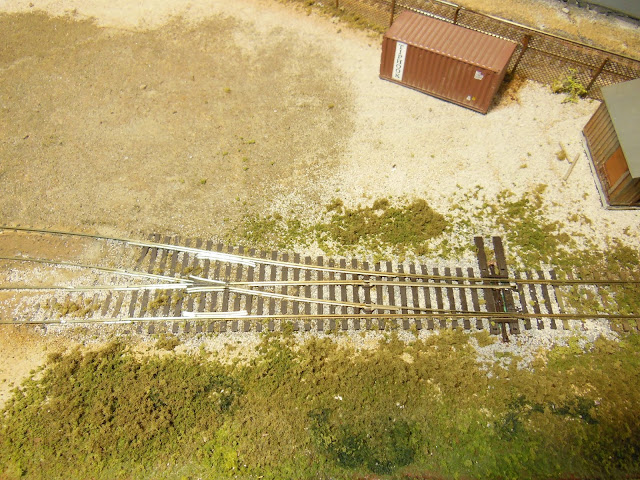 The Peco switch in place, but I really should have painted the rails first. Oh well.

Also last week I posted a photo of my new purchases from the train show in Woodstock. Among those items was a 50 foot Berwick boxcar from Branchline, painted for the Wisconsin Central with the SSAM reporting marks.

Still shiny and new from the box just won't do for me, so before it goes on the layout I feel a little weathering is in order.  I try to refer to interweb photos of similar cars, hopefully from the same number series at least, for reference as far as wear and weathering patterns go.

With this boxcar, to start I flattened down the burgundy with a few light airbrush passes of Concrete Grey.  I've used that colour a few times now to tone down original factory paint jobs, and have had very good results so far.  Using white for this step can quickly lead to a frosted appearance to the paint, so I think the grey-beige of the Concrete really helps me to avoid that situation.

Following the airbrush, I just use an old worn out brush to dab burnt sienna, burnt umber, and a tiny bit of black along the roof sills and door tracks, and then blend it together with a little drop of water on the brush.

I've dirtied up the lower areas of the doors with a darker mix of the same colours. Scratches and rust blisters on the panels and posts are burnt sienna and burnt umber applied with a fine tipped (005) brush. 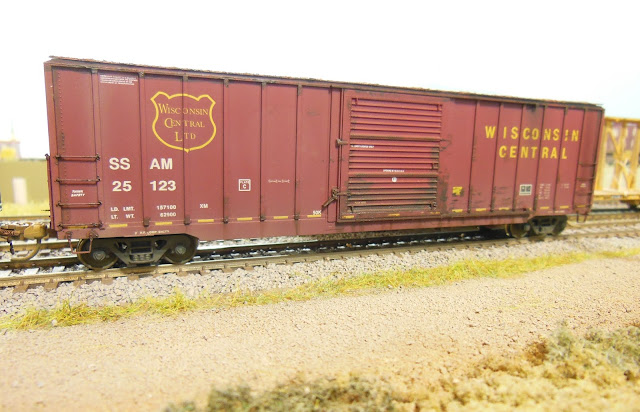 Some rusty colour has been sprayed on the coupler by the previous owner of the boxcar, but I couldn't say exactly what was used. I'm thinking that it's a bit too orange though, so I think I should go over it with a quick spray of Rail Brown or something similar.

The silver of the roof is first toned down a bit with Grimy Black mixed with Rust and then the rust spots are actually 3 colours, applied separately in layers. Raw Sienna, then Burnt Sienna, and finally Burnt Umber for the darkest portion. 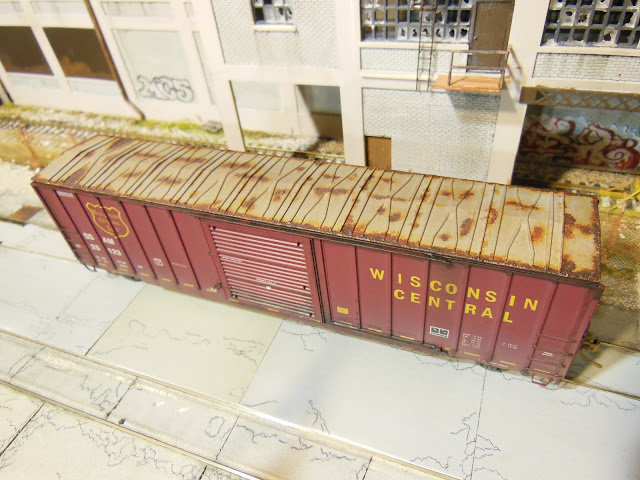 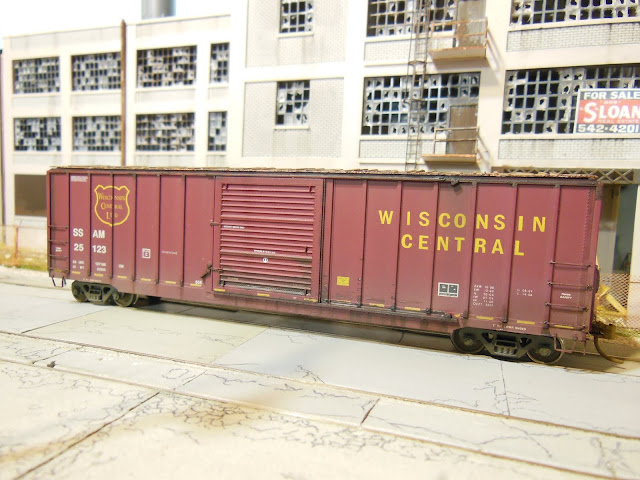 The other side of the Berwick car.  I'm really pleased with the way this addition to the fleet has turned out.