I've had one of the Intermountain orange and white SCLAIR covered pellet hoppers for the layout for quite a long time, and had thought that a set of two or three of them would be real nice. When Intermountain released them again last year, I got another one, plus an undecorated kit of the same car so I could use a matching set of Highball Graphics decals that I have.

The orange and white colour scheme is really a nice one, and stands out nicely among the black tank cars and grey covered hoppers that always fill the freight yard here.

I was told a while ago by a friend that there are only 3 of the orange and white SCLAIR three-bay covered hoppers remaining.  They have all had their reporting marks changed to NCLX, and the numbers are 46044, 46048, and 46051.

Actually the Intermountain models aren't really exactly correct (it figures), but they're close enough for me. The main difference that I can see is the 3 horizontal stiffeners that run along the top of the sides on the prototype, whereas the Intermountain model has only one, which is located a bit lower down on the side panels. Oh well, I don't really think I could properly correct such details, and I'm content to live with such a compromise anyway. 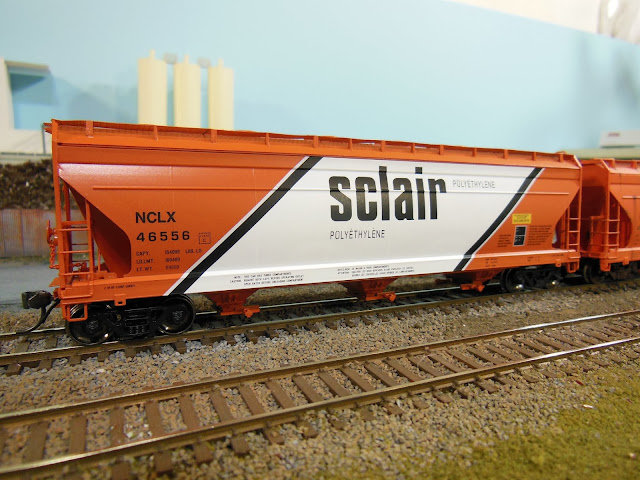 My newer Intermountain model, as it appears straight out of the box. 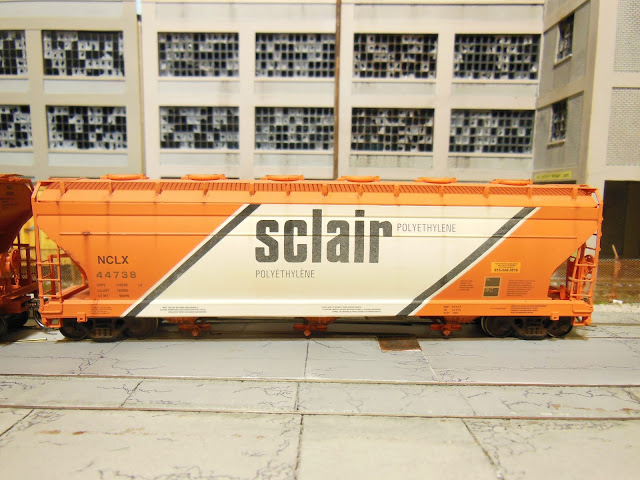 My first SCLAIR hopper, on which I have previously done some paint fading and a bit of rust streaking. 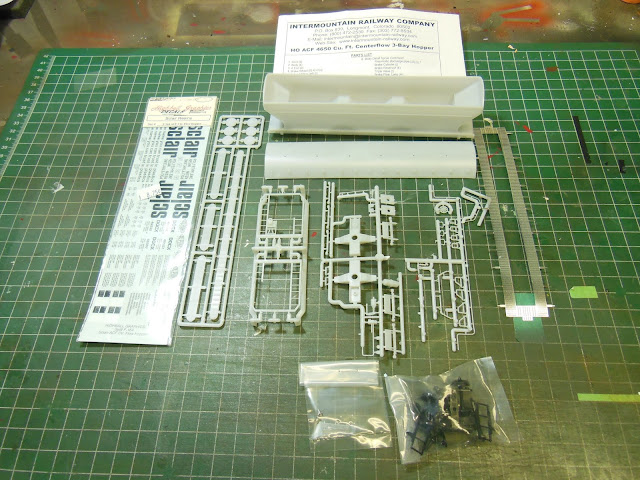 The undecorated Intermountain kit, along with the Highball Graphics decal set.  Metal walkways for the roof come with the kit, but no weights are included.

Here are two photos of the prototype SCLAIR hoppers in service, both of these having been taken by Luc Sabourin.

This car has the French "Polyethylene" painted out below the SCLAIR.

Note that this one (46548) has the word "Polyethylene" painted out in both locations.


Here's a photo that I took a couple of years ago of the 3rd one of the remaining prototype cars, NCLX 46551. This one was taken as the freight car was sitting in the yard at Sarnia.

So, I'll be trying to patch and re-number my 3 models to at least resemble the last 3 of the remaining prototype covered hopper cars in this distinctive paint scheme.  Wish me luck, especially with the undecorated kit version of the model.
Posted by TrainGuyJim at 08:36